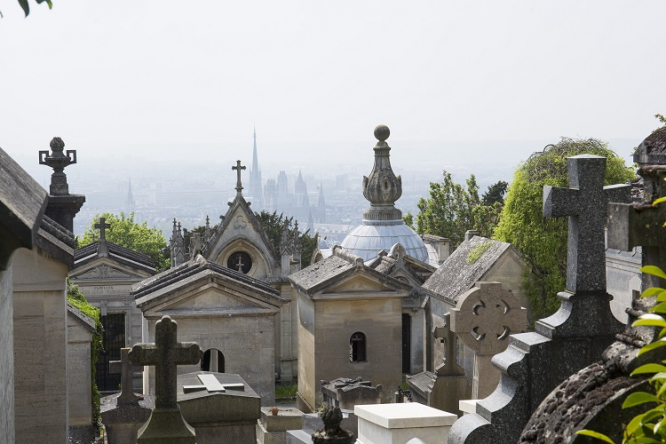 Tombs with a view in the exceptional Monumental Cemetery, on the outskirts of Rouen and overlooking the cathedral
By Jane Hanks

The huge diversity of French architecture and art of the 19th and early 20th centuries is on show at many of the nation’s cemeteries.

Unlike the restrained graveyards of the UK, cemeteries in France are often flamboyant, with extraordinary tombs, sculptures and monuments.

Guénola Groud is the cemeteries heritage officer for Paris and has co-written Cimetières et Tombeaux, a sumptuous book with superb photos.

She visited and studied cemeteries throughout the country and was surprised by the range of styles.

“The period for decorative tombs started at the beginning of the 19th century and went on until some time between the two world wars,” she said.

“Before the Revolution, the church took care of the dead, and their resting place was closed to the public.

“In 1804, after the Revolution, Napoleon’s Decree 23 Prairial an XII transferred the property of parish cemeteries to the commune and created the rules that are largely in use today. New cemeteries had to be built away from town and village centres, for hygiene reasons, but were open to the public.

“Individuals could buy a concession in the cemetery and that could be for a fixed number of years or for perpetuity, which meant one family could bury their dead in the same place. Little by little, during the 19th century, the idea of a family tomb took hold.

“Great importance was attached to the place in which the family was buried, so wealthy families would spend large amounts and often use the same architects for their tomb as for their chateau.

“They were often influenced by the ornate cemeteries and architecture of Italy.”

The Père Lachaise cemetery in Paris is regarded as the model for burial places throughout France but, according to Mrs Groud, came about almost by chance.

She said: “At the end of the 18th century, there were about 200 small, rather unsanitary, graveyards in Paris.

“When a chateau with immense grounds came up for sale in 1801, the city jumped at the chance to buy it.

“A visionary and great architect of the time, Alexandre-Théodore Brongniart, was employed to design it.

“Influenced by the English parkland style fashionable at the time, he decided to keep the woodland that made up part of the grounds and introduced winding paths with the plots on each side.

“It quickly became a fashionable site for visitors to walk in, with its beautiful views over the landmarks of Paris.”

The poor were also buried there, in mass graves with no memorial. The 70,000 graves include those of Honoré de Balzac, Frédéric Chopin, Colette, Marcel Marceau, Edith Piaf, Oscar Wilde and Jim Morrison.

It is now one of the top 10 most visited sites in the capital with an estimated 3.5 million people a year walking for free through the 44-hectare site, described as a mix between an English park and a shrine.

There are also several memorials to those who died in wars, including the impressive 1899 Monument aux Morts, and several others to foreign soldiers who died for France and to victims of natural or human disasters.

“The best way to visit Père Lachaise is to wander and feel the special atmosphere of the place,” said Mrs Groud.

Up to 1840-50, the favoured style was classical Greek and Latin with columns. In the Second Empire, between 1852 to 1870, it tended to be neo-Gothic and then became more eclectic, with increased daring and invention from architects.

Gradually, during the 20th century, the introduction of mechanisation meant stone was often cut and polished on site in quarries, and changing social conventions meant the appearance of the tomb became less important.

Tombstones began to be more austere, with less decoration and nearer to the polished, smooth, granite typical today.

While she was researching her book, Mrs Groud was struck by notable regional differences. “In Brittany, graves are modest, decorated simply with granite crosses. In the south, marble is heavily used; in the Haute-Marne there is heavy ornamentation and sculpture,” she said.

There are exceptional cemeteries to visit in big French cities, including Lyon, Marseille, Rouen, Toulouse, Metz, Besançon and Bordeaux.

But this rich architectural heritage is under threat.

“The difficulty is that nearly all tombs are private property and so a commune cannot touch them without the family’s permission.

“Often they are not maintained,” said Mrs Groud.

“Paris is an exception, where my job exists to care for the cemeteries.

“Many of the tombs have passed into the hands of the commune.

“Every year, when a concession comes to an end, we have to decide whether to save or destroy up to 300 tombs a year at Père Lachaise.

“Some have to go, to create space for new burials.

“In other parts of the country it is mostly left to local history associations to try to save these precious monuments.”

The Patrimoine Aurhalpin heritage association, based in the Auvergne-Rhône-Alpes region, is particularly active and has created a national spring cemeteries event, which takes place this year on May 15, 16 and 17.

Last year was the fourth event, when local organisations and communes organised guided tours of 108 cemeteries in 21 departments in France.

This year, the association hopes to be able to add more cemeteries to its list.

They say the visits give people a chance to hear the history of their commune, find out about notable personalities, learn of local sculptors, masons and architects who designed and created the tombs, and learn their significance.