Secrets and rituals of the French monarchy in Reims 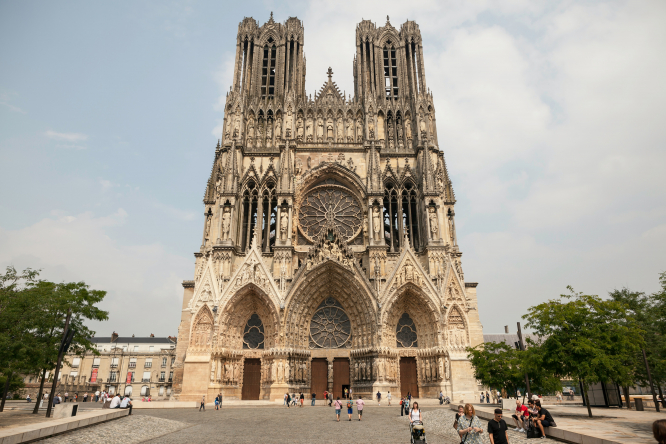 Reims, in Marne, has not one but two Unesco heritage ratings. One, awarded in 2015 for the Paysages de Champagne, the other in 1991 for the cathedral of Notre-Dame, the old archiepiscopal palace, the Palais du Tau, and the old Abbaye de Saint-Remi.

What makes these ancient edifices special is the role they played in crowning the kings of France. Twenty-five kings were crowned in the cathedral, from Louis VIII in 1223 to Charles X in 1825. In the context of medieval Christianity, the king was an intermediary between God and the people, regarded as His representative on Earth. The king received his power from God. In 1429 Joan of Arc told the future Charles VII: “The King of Heaven would have me tell you that you will be anointed and crowned in the town of Reims and that you will be his Lieutenant, which is the true King of France.”

So why was Reims and not Paris the chosen place for coronation?

Shortly before the year 500, on Christmas Day, the bishop of Reims, the future Saint Remi, baptised Clovis, the first king of the Franks, into the Christian church. Legend has it the attending crowd was so great that a dove spirited a vial of consecrated oil over the throng to anoint Clovis during his baptism. In 816, Louis I the Pious, the son of Charlemagne, was crowned emperor in Reims cathedral by Pope Etienne IV. A letter from the emperor to the archbishop of Reims names the cathedral as the site of the holy baptism of Clovis, the first Christian Merovingian king. The baptism and anointment of Clovis in Reims evolved into a royal anointment which legitimised the new king’s God-given power. Without the legend of Clovis’ baptism, Reims would not have become the City of Coronations.

The legendary consecrated oil was rediscovered when archbishop Hincmar moved the relics of Saint Remi from his sarcophagus in 852. Hincmar proclaimed “the glorious Clovis was anointed with a chrism (consecrated oil mingled with balm) that came from Heaven, and which we still possess.” Hereafter, the oil was kept in the Sainte Ampoule (the Holy Ampulla) at the Abbaye de Saint-Remi and brought to the cathedral for every coronation.

A coronation always took place on a Sunday or religious feast day. The king and his cortège travelled from Paris to Reims over several days, entering the city in solemn procession the day before the ceremony. The whole city was involved. The royal party would arrive in advance needing accommodation, and the good citizens of Reims were called upon to put them up for the duration. For the coronation of Charles X, in 1825, records show more than 1,000 people needed lodgings! The king was always hosted in luxury at the archiepiscopal Palais du Tau, next to the cathedral.

On coronation day, the king was woken at dawn, when the cathedral cantor knocked on the door of the royal chamber. Inside the chamber the grand chamberlain asked, “Who do you want?” “The king,” replied the cantor. “The king is sleeping,” the grand chamberlain would reply. This exchange was repeated three times, until the Bishop of Laon would say from outside the chamber, “We ask for [name of the king], whom God has given to us as king.” The door opened and the king was accompanied in procession from the palace to the cathedral.

So began the long day of sacred ritual. Once the king was seated in the middle of the cathedral, the archbishop fetched the Holy Ampulla from the main entrance, brought from the Abbaye de Saint-Remi by a procession of monks. Before the altar, the king promised to defend the Church and its privileges, to keep the peace and justice over his people and to hunt down heretics.

First, the chivalric rites took place, with the golden spurs and sword of Charlemagne. Then for the exciting bit. The seated archbishop anointed the kneeling king seven times with the sacred ointment first used to baptise Clovis, on his head, arms, chest and shoulders. He was clothed in a mantle and received the ring, sceptre and the Hand of Justice. The king of France was now the intermediary between God and His people. Surrounded by peers of the kingdom, Grand Vassals, dukes, counts and high-ranking ecclesiastics, the archbishop placed the crown on the king’s head. Peers came to give homage to the enthroned king. Then followed Mass, in which the new king took communion, drinking from the Chalice of Saint Remi.

The ceremony concluded with the solemn procession from the cathedral along the chemin de roi, a purpose-built construction decorated with gorgeous tapestries which led to the Palais du Tau. The coronation was celebrated with a gargantuan banquet in the main hall of the palace. No coronation feast menus survive, but based on knowledge of other medieval royal banquets, we can suppose they dined on an indigestion-inducing spread of salmon, pike, crayfish, cheeses, eggs, rabbits, chickens, capons, beef and pork.

1. In the Middle Ages, a ‘tranchoir’ was a piece of bread used as a plate. Some 15,000 tranchoirs were served to the poor following the coronation of Louis XII in 1498.

2. Louis IX, the future St. Louis, had a ‘speed coronation.’ The 12 year old was crowned on 29 November 1226, just three weeks after the sudden death from dysentery of Louis VIII. The coronation was arranged so quickly that many powerful dignitaries didn’t have time to travel to Reims.

3. Joan of Arc was present at the coronation of the dauphin, crowned Charles VII, on 17 July 1429 during the Hundred Years War.

4. On 13 February 1575 Henry III was crowned in Reims cathedral. He would be assassinated at Saint Cloud a few years later after a reign tarnished by the Wars of Religion.

5. Somebody tried – and failed – to steal the Holy Ampulla containing the sacred anointing balm the day before the coronation of Louis XV in 1722. Thereafter it was locked in the Abbaye de Saint-Remi.

Cathédrale Notre-Dame de Reims
Where: Place du Cardinal Luçon.
When: Outside of Covid-19 restrictions, open every day from 7.30am to 7.30pm.

Palais du Tau
Where: 2 place du Cardinal Luçon.
When: Outside of Covid-19 restrictions, from 6 May to 8 September, open Tuesday to Sunday from 9.30am to 6.30pm.
The old archiepiscopal palace,now the Musée de l’œuvre de Notre-Dame, holds the trésor of the cathedral, including the Chalice of Saint-Remi. Its name comes from the Greek word for the letter T (tau), which describes the shape of the palace’s ground plan. This name was in use as early as 1131.

Basilique Saint-Remi
Where: Place Chanoine Ladame.
When: Outside of Covid-19 restrictions, open every day from 9am to 7pm.
A Romanesque and Gothic basilica built in the 9th century to house the Holy Ampulla and the relics of Saint-Remi.