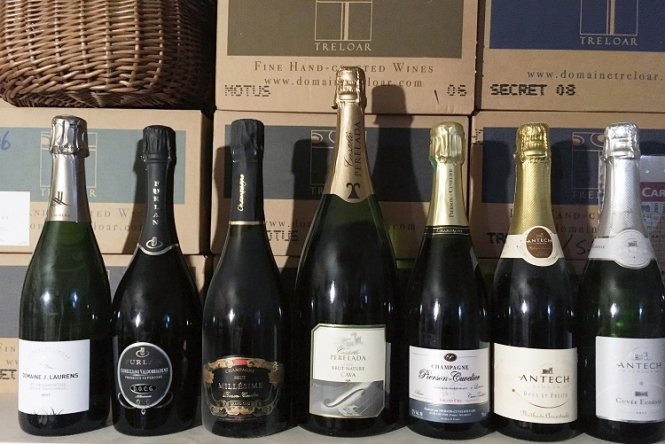 Last month I wrote about the way Champagne is made and what makes it special. This month I am going to talk about how those special things do make a difference to the taste and what alternative sparkling wines are on the market.

When I buy a bottle of Champagne, I am hoping for several things. Firstly, I want to be able to smell a sort of biscuity aroma mingled with creamy, delicate fruit. I then want the wine to have vibrant, refreshing acidity, for it to taste dry without being drying and for the bubbles to give it a fine mousse, rather than a powerful fizz.

The peculiar aroma of biscuits or cream crackers comes from autolysis. This is the process where the dead yeast, which was in the bottle during the secondary fermentation, breaks down and releases amino acids and other molecules into the wine.

Champagne isn’t the only sparkling wine that is made by secondary fermentation in the bottle. Cava, made mainly in the Catalan region of Spain, uses the same method but with different grape varieties. Cava is made from Macabeu, Parellada and Xarello. The best Cavas, often from base wines aged in oak, are rich and textured. However, a lot of the cheaper, mass-produced versions are just fizzy wines which lack the crispness and freshness of Champagne.

Limoux, in the Languedoc Pyrenees, claims to have invented the bottle-fermenting method of making sparkling wine decades before Champagne. Unfortunately it chose to use the Mauzac grape, which is rather bland and seems to give the wine a slightly stale apple aroma. In recent times, Chardonnay and Chenin blanc have been planted in Limoux to help improve the flavour and freshness of the wines.

Today you can buy both the traditional Mauzac-dominated version, known as Blanquette de Limoux, or the Crémant de Limoux which has a majority of Chardonnay, supplemented by Chenin blanc and Mauzac .

There is also a Limoux style called Méthode Ancestrale where the wine is not disgorged after bottle fermentation, leaving the yeast in the bottle and therefore potentially making the wine cloudy, just like in bottle-fermented beers. This gives a distinctly powerful aroma from the yeast autolysis after a period of time.

Méthode Ancestrale has found a new lease of life outside Limoux in trendy “Pet-Nat” wines. This is short for Pétillant Naturel. They can be made by bottling partially-fermented wine or by adding juice or sugar to the bottle, resulting in wines that are cloudy, rustic and fun.

The term “Crémant” is used to describe all forms of bottle-fermented sparkling French wines that are not Champagne. They are controlled by AOP rules and use local grape varieties. Therefore Crémant de Bourgogne uses Pinot noir and Chardonnay (just like Champagne), Crémant d’Alsace adds Riesling and Pinot gris. Crémant de Loire is based mainly on Chenin blanc with Chardonnay and Cabernet franc. Crémants are also made in Bordeaux, Savoie and Jura. They may be dry or demi-sec, often annoyingly omitted from the label.

They are made using the Charmat method, where the wine is refermented in a large, pressurised tank and bottled directly. These wines therefore don’t benefit from any yeast autolysis and are therefore simpler in nature. They should also be cheaper because the process is so much quicker. Prosecco and Asti Spumante are also made in this way.

Finally there are sparkling wines made without any secondary fermentation but by the same technique as fizzy water, by injecting carbon dioxide. These represent the bottom end of the market both in terms of price and taste. They can be made from virtually any base wine from anywhere in France. They are usually just labelled by their colour and level of sweetness.

So while Champagne occupies the top rung of the ladder in both price and quality, there are interesting Crémant alternatives from other regions that often represent better value for money for a celebratory drink than the big-brand Champagnes. While for those on a particularly tight budget there are carbonated wines that may be sufficient for a teenage party.

Jonathan Hesford has a Postgraduate Diploma in Viticulture and Oenology from Lincoln University, New Zealand and is the owner, vigneron and winemaker of Domaine Treloar in the Roussillon - visit www.domainetreloar.com