Behind the scenes at Paris' La Buvette plus exclusive recipe 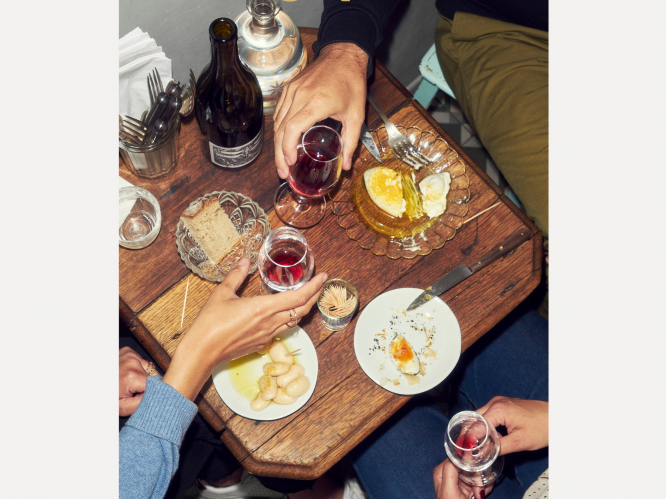 Connexion goes behind the scenes at Paris' La Buvette, speaks to founder Camille, and shares an exclusive recipe from the cookbook.
By Connexion Journalist

Sometimes my inspiration comes less from new ingredients and more from the desire to recapture the taste of a favourite meal or dish at a Paris restaurant. At Le Bougainville, an old-school bistro not far from Épices Roellinger, I sampled a terrine of chicken livers speckled with pistachios and apricots, an idea I liked so much that it influenced the flavours of the terrine I now serve at La Buvette. I also love new-style bistros, like Le Cadoret in Belleville run by Léa Fleuriot, the chef, and her brother, Louis, who manages the front of the restaurant.

After lunch one day, I had a chat with Léa about her crème caramel, which is perfectly silky and unfussy, and she kindly shared with me her recipe [which is in the book]. Down the street from Le Cadoret is La Fontaine de Belleville, which stays true to an open-all-day Parisian bistro but with good coffee (it’s owned by local coffee roasters Brûlerie de Belleville).

I’ve done pop-up events in the space serving my Egg + Eggs recipe, inspired by a classic bistro way of serving eggs. (But the simplest way to serve eggs in a bistro is to simply hard-boil them and let people crack the shells directly on the bar.) In other words, not all taste experiments need to be revolutionary. Sometimes it’s just about paying attention to notice when a certain version of a classic is really good.

I mention tasting before cooking because I am an untrained cook. I use intuition to figure out how to make something, and I don’t always succeed. What usually works out, however, are the flavours I compose in my head.

After my first visit to Épices Roellinger, I infused olive oil with the vanilla I had bought, and I put it on goat cheese, topping the plate with crushed green peppercorns. After smelling the vanilla and green peppercorns in the shop, my brain connected with my taste buds, giving me the intuition that these flavours would pair well together. Fortunately, people loved the goat cheese dish because I realized after three days of serving it I had forgotten to actually eat it myself.

Lockdown inventions: the farmer who accidentally invented a new cheese

All this is to say that even if cooking techniques are not something you feel confident in, you can get better by teaching yourself how to taste with an open mind. Paying attention to flavour allows me to know when something would benefit from a bit of flaky salt on top or a squeeze of citrus juice. It’s also okay to ask questions, and I have learned a lot by asking chef friends why they do what they do.

It was a revelation when a chef told me to make sure to bring meat to room temperature before cooking it; this way, the meat doesn’t go into shock from the heat, and it cooks more evenly. Now, before I make pork rôti (roast) inspired by my visits to Belleville markets, I always take the meat out of the refrigerator an hour or so before I begin to cook it. These little tips add up over time and help make me more confident in the kitchen.

La Buvette started out being a place for the neighbourhood, so I never expected people to come from all over the world, especially people who knew so much more about wine and food than me, from sommeliers in Paris, to chefs from London, New York, and San Francisco.

Some chefs would even ask to work with me behind the counter on special collaborations. I will never forget the time Julie Della Faille, who is now the chef of Le Verre Volé (see page 81), cooked lobsters at La Buvette. We boiled them in water from an electric kettle and then seared them in an industrial toaster (the kind you see at hotel breakfasts). It was a crazy thing to do, but it was also so memorable that I would do it all over again.

And one warm May, my friend Daniel Baratier, the former chef and owner of Les Déserteurs (who has since founded L’Auberge Sur-les-Bois in Annecy), collaborated on an ice cream bar with me. I bought so many ice cream cones for the event that for a couple of weeks after, I ended up serving ice cream to neighbourhood kids in the afternoon so the cones didn’t go to waste. In this way, La Buvette has truly become a place for living, a place with a little magic that I can cultivate but not control.

Maybe, as my father suggests, I deserve the luck I found, but I was also helped along the way by family, friends, and mentors. This book is as much about them as it is about me. Most of all, it is about La Buvette, the world it inhabits on the east side of Paris, and the people who have come through those doors to share a moment with me. For that, I am indeed lucky.

How to explore France this summer: go camping in Paris

Recipe from the book: Goat's Cheese, Black Garlic and Cherries

1. Using your fingers, smear the black garlic onto the base of a small plate to create a thin layer. Put the goat cheese on top, squashing it a bit with a spoon so it’s broken up.
2. Drizzle with olive oil and add a good pinch of salt. Top with hazelnuts and cherries.

*Look for black garlic next to the seasonings and spices at a speciality foods store (it is not usually sold next to regular garlic in the produce section).