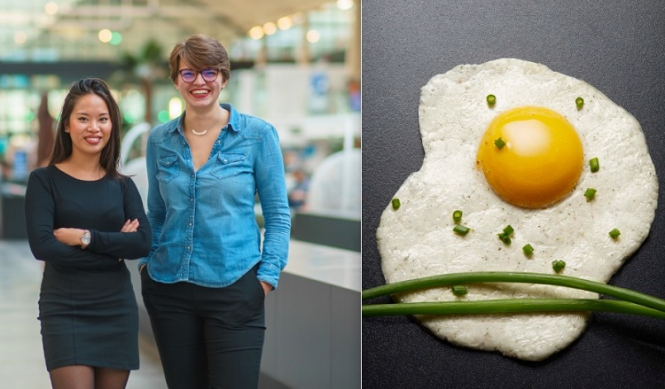 Sheryline Thavisouk and Philippine Soulères, both 25, were studying at the Ecole de Biologie Industrielle in Cergy-Pontoise near Paris in 2017 when they realised vegans they knew said eggs were the food they missed the most.

They created their first prototype vegan egg and went on to make 50 more before they made their first satisfactory egg.

Teachers encouraged them to go further and create their own company.

Ms Thavisouk said: “Our objective is to offer a similar taste to that of a classic hen's egg, and we are slowly getting closer to this.

“We are continuing the tests to have the best formula possible from a nutritional aspect and to ensure the product quality.”

The ingredients will be revealed once the eggs are commercialised in the summer.

Called “Les Merveilloeufs” (mixing words for marvellous and eggs), they are made up of vegetable and mineral matter but look exactly like real eggs, with the shell, white and yolk.

They can be used for everything, just like normal eggs: for quiches, cakes... and you can now also make omelettes without breaking real eggs.

It is a market that was worth €380million to large supermarkets in 2018.

They will be the target market for Merveilloeufs but the vegan eggs could also be a big step forward for people with intolerances or allergies.

Ms Thavisouk said: “It was quite a crazy idea but the project is really close to our hearts and we want to go all the way now.”