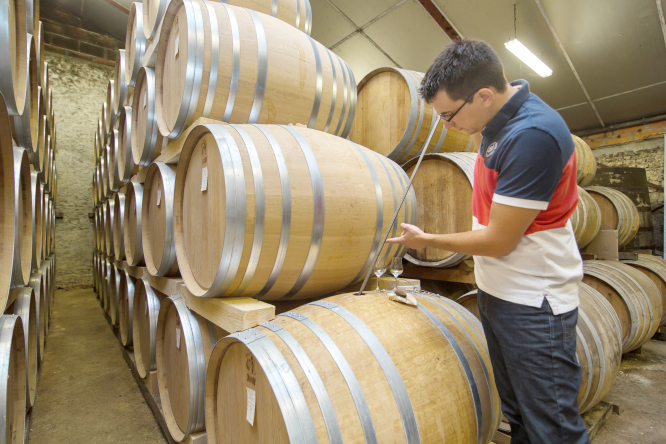 Pineau des Charentes, an apéro produced in Charente and Charente-Maritime, is a ‘vin de liqueur’ made from Cognac weau-de-vie and grape juice (and sometimes grape must).

It was traditionally made by Cognac producers just for their own consumption. “I don’t know why my great grandfather Henri Chainier decided to produce it for sale in 1933,” says Damien Fradon. “But he was one of the first to have that idea; we still make it today, and I’d say we are primarily known for our pineau.”

Well known in the area, and strangely enough, in Belgium, pineau is less well-known in the rest of France. “The market for apéros is very crowded,” says Damien. “There’s a lot of competition and the sweeter drinks aren’t in fashion any more.”

Pineau really is not that sweet when compared to Muscat, for example, but he says it doesn’t matter. People think of it as a sweet drink.

The Fradon domaine in Réaux-sur-Trèfle, Charente-Maritime, is just 30kms outside the town of Cognac, and in line with everyone else, most of their vines, 75 hectares, produce Cognac. But over the years Fradon’s pineau has become so popular that a further 3,000 hectares of vineyards are dedicated solely to producing the grapes for pineau.

The domaine has been in the same family for generations; the name changed in the 50s when Damien’s grandmother married and took the name Fradon. He and his wife Estelle still work with his parents Michel and Micheline.

It takes a minimum of five years in oak barrels to mature pineau, and sometimes longer, but Damien says it is worth it to get the right flavour. Unsurprisingly, sales are up.

It is possible to visit by appointment, and tour the vineyards, the cellars, the distillery, and of course, taste their wines. “We only speak French,” says Damien. “But we welcome visitors from all over the world!”

They also have a shop on site where customers can buy wines. “People like to buy direct from the producers because it’s more authentic, they have a relationship with us, they know where the wine comes from and who made it,” says Damien.

Fradon also has a stall in the Marché de Loix on the Ile-de-Ré every summer in July and August, where you can also taste and buy their wines.

This strong-flavoured, spicy cheese is made in the Thiérache region of Hauts-de-France and over the border in Aisne (Avesnes is a village in Pas-de-Calais), and is one of the most unique French cheeses due to both its provenance and unusual taste.

It is created from buttermilk and unripened leftovers from AOC Maroilles production and enriched with parsley, tarragon and cloves.

This soft cow’s milk cheese has an average weight of 250 grams once formed by hand into a cone shape. It is then  washed with beer and sometimes finished off with a dusting of paprika for a smoky finish.

They were the first fresh vegetables to win the celebrated AOP (Appellation d’Origine Protégée) in 1998 and can be served in soups, salads and stews (or in a gratin with tomatoes), or with fish or meat.

Available to buy, ready to reheat, from www.bienmanger.com