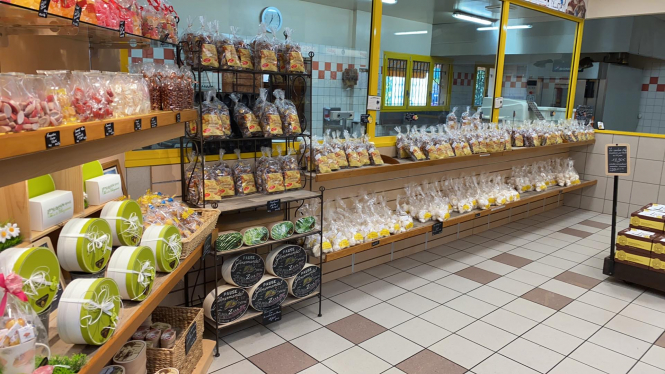 'We don’t use preservatives so our madeleines only have a shelf-life of a month meaning we don’t supply them to supermarkets or other boutiques' Pic:

The Zins family have been making Madeleines de Commercy (between Verdun and Nancy in Meuse, Lorraine) since 1951, when Georges Zins came up with his all-butter recipe at his boulangerie. His son and daughter-in-law, Jean-Pierre and Marinette took over in 1975, and their son Thierry has been working in the bakery with his parents since 2000.

In 2002, the family sold the bakery to concentrate solely on madeleines. They opened their shop La Boîte à Madeleines, and in 2006 Thierry’s brother Stéphane joined the family firm.

“We open every day except Christmas Day and New Year’s Day,” says Stéphane. “It’s just the two of us and we have five employees, mainly packing and selling in the shop.

“We don’t use preservatives so our madeleines only have a shelf-life of a month meaning we don’t supply them to supermarkets or other boutiques. They are only available from our own shop.”

In 2002, they were making 500kilos of madeleines a month, but today that has grown to become closer to five tonnes a month, and they receive around 100,000 visitors per year. People can watch the entire process from start to finish (except on Sundays and Mondays).

Stéphane points out that being halfway between Paris and Strasbourg, near the birthplace of Jeanne d’Arc, and close to Verdun and World War One battlefields means they are well located for tourists.

Madeleines are available all across France but were invented by a woman called Madeleine in Commercy for a party at the château, and from the arrival of the railway in the late 19th century right up until World War Two, the townswomen used to crowd the platforms selling madeleines to the passengers from large wickerwork baskets.

“The little ones come in lemon, orange, raspberry, chocolate and hazelnut. They are delicious. We also make financiers and ‘rochers coco’ (coconut macaroons).

“Having experimented with selling online, they abandoned the idea. “We’re so busy supplying our own shop, we really don’t have time to do anything else. If you want to taste our madeleines, you have to come and see us!”

Berlingots: The traditional hard sweets still made by hand

French ‘RoboCrop’ pilot scheme could be solution for small-scale farms
15 October 2021
More from Food and Drink
More from Connexion
Get news, views and information from France
Join the newsletter
Subscribe to The Connexion