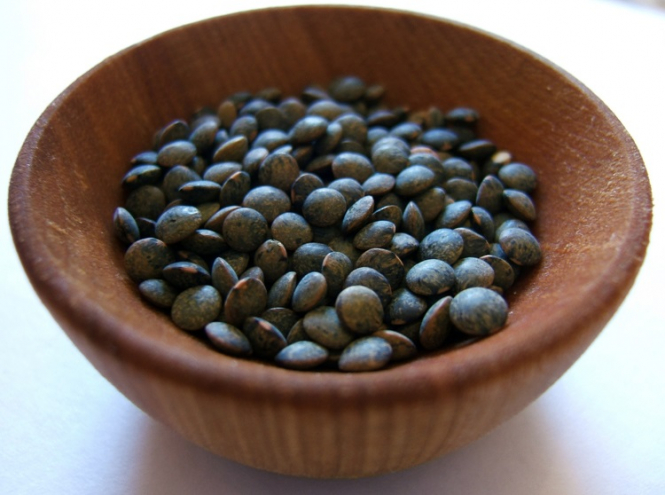 The production of lentils has doubled in France over the past three years, reflecting an increase in the numbers of vegetarians and vegans.

This is allied to advice from public bodies at national and international level that we should all eat less meat and more pulses if the world is going to be able to feed its ever growing population in future.

The famous Puy lentils, grown around Puy-en-Velay, Haute Loire, also got a boost in sales two years ago after a newspaper article revealed it was a regular on the menu at Prince George’s private school.

However, lentils are not easy to grow according to Franck Rocher, President of the Association Nationale Interprofessionnelle des Légumes Secs, ANILS, and he thinks it will be difficult to produce more than present levels, without increased funding into research and development to help farmers find improved growing methods.

Lentils were one of the earliest domesticated crops.

The name comes from the Latin lens and the optic lens took its name from the shape of the edible lentil. The plant is thought to have originated in the Middle East, from where it spread to the Mediterranean. Archaeological finds have shown lentils were eaten by the Pharaohs in Egypt and were present in the hanging gardens of Babylon.

They are part of the legume family, also including beans, peas, clover and peanuts, and the lentil seeds grow in pods, with between one and two lentils per pod, of which there are up to around 60 on each plant.

Most lentils grown in France are the green variety, la lentille verte.

The most well-known are Puy lentils (sometimes known as “poor man’s caviar”), reputed to have the best taste and which carry the prestigious Appellation d’Origine Protégée (AOP) label.

Before the label was awarded in 1996, their reputation was so good that other countries called their lentils “puy” to improve sales.

Green lentils are also grown in the Berry region in central France, in the Indre and Cher, where they carry an Indication Géographique Protégée (IGP) label. They can also be found in the Eure-et-Loir, Yonne and Aube.

There are a handful of producers in France who are experimenting with red, white and black lentils.

One farmer in Normandy is trying red coral lentils, but their production is more complicated because they have to be shelled before they can be sold.

Franck Rocher, has his farm at Siaugues-Sainte-Marie, Haute-Loire in the heart of the AOP Puy lentil region.

They owe their good reputation to the local micro-climate. In summer the hot and dry weather means that the skin of the lentil is finer than on those from other areas, which helps it cook faster.

The growing conditions also mean it is less rich in starch so it is less-floury in composition and has a delicate taste. The Puy lentil’s blue tinge comes from the presence of anthocyanins, the same pigments found in blueberries, blackberries and black grapes.

Mr Rocher grows wheat and maize as well as lentils, and explains that though he is passionate about growing lentils, they are more difficult than classic cereal crops:

“Our lentils are grown at altitude, 1,000 metres above sea level, which means that there is more chance of cold periods and storms than in other lentil growing areas. However, these conditions give the Puy lentil its charm and make it more delicious than others.”

Weeds and insects are also a threat to this delicate plant: “We are allowed to use very few chemical products. The irony is, that we import tonnes and tonnes of lentils, which are grown in countries which use huge amounts of chemicals, and so it is very difficult for us to compete. This is why we would like to see more research and development into this crop to develop new cultivation methods.”

From November to February, the farmers look after their soil. Lentils prefer a weed-free environment which is ploughed deep, is fine on the surface and dry.

The seeds are planted when the temperature of the soil reaches 5°C, in March or April. Traditionally, planting is done in the last quarter of the moon à la lune vielle, which favours the production of the seed pods. It is harvested from July 20 to September 15.

The harvested pods are collected by co-operatives or private companies which sort the lentils and remove any small stones.

Mr Franck says advice given in recipes to pick over and wash lentils before use as they may contain small stones should no longer be necessary, as sorting machines have been much improved and the lentils pass through ten sorting machines before they are packed.

Puy lentils are popular and Mr Franck says they can never produce enough to meet demand.

In general, French green lentils are darker in colour and smaller in size than green lentils from other countries and hold their shape. They need longer cooking times than other varieties, around 25 minutes, or less if you like them harder.

They have a distinctive nutty, peppery and earthy flavour, which is even more pronounced in the Puy region lentils. You are advised not to add salt during cooking, because that makes them harder.

They are full of protein, fibre, magnesium, and iron and do not contain fat, sugar or gluten, and so are highly recommended for healthy eating.

Mr Franck says, despite all the difficulties in growing lentils it is a crop he loves: “It is a beautiful product. Its appeal is that it is not stable. Every year is different. I am passionate about finding the best ways to grow Puy lentils.”

France is the biggest producer of pulses in Europe, and the production of chick peas has also doubled in the past three years.

They are mostly found in the Lauragais area in the Midi Pyrénées between Toulouse and Carcassonne, but also in the South East, notably in the Drôme, Gard, Vaucluse, Var and the Alpes-de-Haute-Provence.

Different types of bean are found throughout France. Flageolets grow in the Essonne, Eure-et-Loir and Brittany.

White Mogette beans are grown in the Vendée, as well as lingot and coco beans which are also found in the Nord and Pas-de-Calais.

Broad beans are cultivated in Aquitaine and split peas have been grown in the Languedoc for 7,000 years and are also found in the Rhône Valley.

However, the amount of pulses grown compared to the rest of the world remains small.

Between 2008 and 2012, world production of pulses was estimated to be 72.5m tonnes per year, of which Europe produced 4m tonnes.