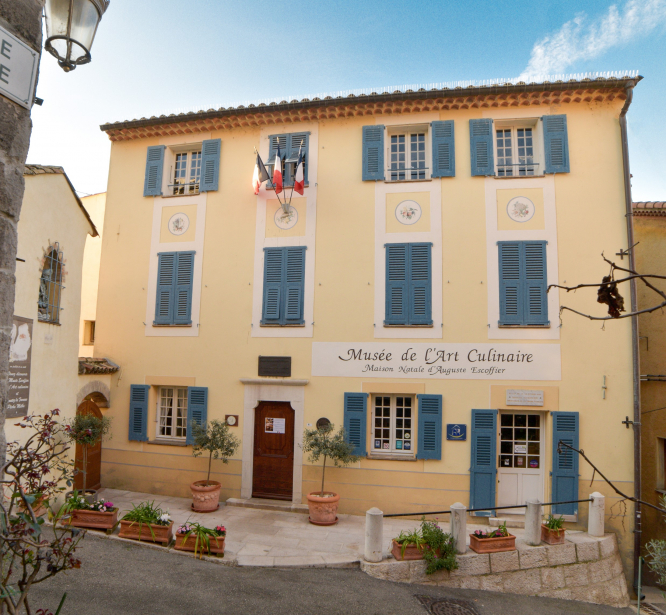 The house where he was born opened as a museum in 1966, with 10 rooms displaying utensils, dressed tables, menus, and items made from sugar, sweets and chocolate
By Samantha David

The name Escoffier is synonymous worldwide with French cuisine, and with good reason. He is credited with transforming the art of cooking into a serious profession.

Georges Auguste Escoffier (1846-1935) was born into a family of chefs and restaurant- owners in Villeneuve-Loubet, near Nice. He left school, aged 13, to work in his uncle’s restaurant in the city.

He soon discovered conditions were bad – the kitchen was hot and noisy, and he was bullied by the staff. Perhaps this early experience influenced his desire to improve the day-to-day working lives of chefs and kitchen staff.

Showing his talent, he learned fast and graduated to other local restaurants, working his way up the ladder. He began creating his own recipes.

At the age of 19 he got a job in Paris at Le Petit Moulin Rouge, where he worked his way from assistant roasting chef to head sauce chef.

He continued inventing new recipes and naming them after the celebrities of the day: ‘les fraises Sarah Bernhardt’ (strawberries with pineapple and Curaçao sorbet), ‘suprêmes de poulet George Sand’ (chicken in crayfish sauce). He is sometimes credited with creating ‘tournedos Rossini’ (steak with a slice of foie gras).

When the Franco-Prussian war broke out in 1870 he became a cook in the Army, where he learned how to use leftovers, how to cook with uninspiring ingredients, and how to use canned foods.

By 1876 he was back working as a chef in Paris. But his stay in the capital was brief. It was not long before he bought Le Faisan Doré restaurant in Cannes.

In 1878, he married Delphine Daffis, and the couple moved back to Paris, where Escoffier got a new job as manager at Maison Chevet, a company that organised grand celebration dinners, in the capital and as far afield as Germany and the UK.

The decade 1880-1890 saw the construction of grand hotels all over Europe, many of them developed by César Ritz, and Escoffier had the skills and the vision to manage their kitchens, providing luxurious menus featuring new dishes with amusing names for the rich and wealthy.

The Escoffier-Ritz partnership was extremely successful.

By 1890, Escoffier was in charge of the kitchens of the Savoy in London, where he allegedly invented ‘crêpes Suzette’. He is also reputed to have successfully persuaded the British to eat frogs’ legs by dint of calling them ‘Nymph’s legs’.

His iconic peach Melba was named after the opera singer Nellie Melba in 1893, and Melba toast in 1897.

Alongside all that glamour and fun, Escoffier had a humanitarian side

Escoffier split his time between Paris, Cannes, and Monte Carlo where he was chef de cuisine at the Grand Hotel run by César Ritz, and the Grand Hotel in Lucerne. The dining rooms of luxurious fashionable hotels became respectable places to be seen, where rich women wanted to show off their clothes and jewels.

Alongside all that glamour and fun, however, Escoffier had a humanitarian side, said Michel Escoffier, his great grandson.

“He wasn’t always just serving the elite, he was committed to fighting poverty too. In a series of articles, he proposed state aid for the most deprived; his ideas prefigured the creation of social security, in fact. He saw no reason why all employees shouldn’t have the same pensions and social protections that were accorded to people working in the armed forces and the public sector."

In 1903, he even created a co-operative ‘mutuelle’ for cooks in London to protect them against illness, and to pay pensions to retired people.

“During the First World War, he founded an association to provide financial help to the families of mobilised cooks. The group even bought a retirement home near Paris.”

Escoffier was a man who loved logical, orderly systems, and as well as dreaming up schemes to combat poverty, he introduced them into his kitchens.

He insisted that staff were sober, disciplined and quiet; he organised chefs into a ‘brigade’, and introduced the idea of different chefs producing different parts of a meal, one doing the vegetables, one doing the meat, etc, so that large numbers of meals could be prepared at once.

These five basic sauces, which can be adapted to make hundreds of others, remain part of a chef ’s basic training.

During his career, he trained more than 2,000 chefs, and also wrote multiple books and articles for the press, including Le Guide Culinaire, which is still regarded as a standard reference.

In 1897, after the hotel’s board of directors investigated falling profits, he and César Ritz were sacked from the Savoy for corruption and fraud. Ritz and Louis Echenard, head waiter at the hotel, were accused of removing wines and spirits worth £3,400, while Escoffier was charged with accepting backhanders.

Newspapers at the time reported that the sackings resulted in the police forcibly removing dozens of angry chefs from the kitchens of the Savoy. Eventually the case was settled privately in 1900, when the three men made signed confessions that were never made public.

By that time, however, Escoffier and Ritz had set up the Ritz Hotel Development Company, opening first the Paris Ritz, and then the Carlton Hotel in London.

Tea at the Ritz became a fashionable institution in Paris and London, much to Escoffier’s distress: “How can one eat jam, cakes and pastries and enjoy a dinner, the king of meals, an hour or two later? How can one appreciate the food, the cooking or the wines?”

At the Carlton in London, Escoffier oversaw a team of 60 chefs turning out 500 meals at each sitting. Simultaneously he was redesigning the galleys of the ferries owned by the Hamburg Amerika Line, and organising gargantuan, gastronomic feasts for royalty and celebrities.

The Times newspaper described them: “Colour meant to much to Escoffier, and a memory arises of a feast at the Carlton for which the table decorations were white and pink roses, with silvery leaves – the background for a dinner all white and pink, ‘Borsche’ striking the deepest note, ‘Filets de poulet à la Paprika’ coming next, and the ‘agneau de lait’ forming the high note.”

In 1912, he started organising occasions called ‘Dîner d’Epicure’ – at the one he organised in 1914, the same haute cuisine French menu was eaten simultaneously by 10,000 people in 147 cities.

He continued managing restaurants during the First World War, despite the death of his younger son, Daniel, in active service. (He had another son, Paul, and a daughter, Germaine.)

“He loved London but insisted that the official language in the kitchen was French,” Michel said. “He spent 30 years of his career in London, and all of his descendants were born in London and are French/British bi-nationals.”

His older son, Paul, organised the catering for the army in Boulogne-sur-Mer during the Second World War, for which he received an OBE.

In 1919, Escoffier was awarded the Légion d’Honneur and in 1920, left Britain to rejoin his family in Monte Carlo where he wrote his memoirs, as well as more articles and books of recipes.

He and his wife died within a fortnight of each other in 1935 and are buried in the family vault in Villeneuve-Loubet.

The house where he was born opened as a museum in 1966, with 10 rooms displaying utensils, dressed tables, menus, and items made from sugar, sweets and chocolate.

There is an extensive library of books which can be consulted on site as well as a collection of videos, some of which can be seen on the museum’s website.

The museum is currently planning to expand, and to host new temporary exhibitions, particularly to illustrate his humanity and vision for improving the lives of the most deprived people.

Behind the scenes at Paris' La Buvette plus exclusive recipe