The true taste of Ardèche 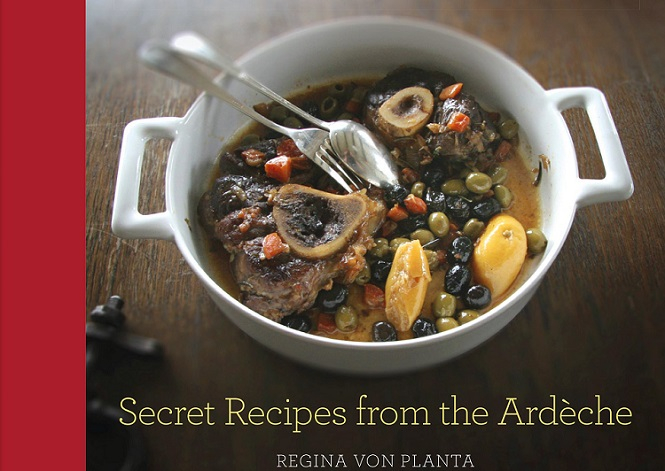 Chateau, Jardin, Cuisine: Secret Recipes from the Ardèche by Regina Von Planta is published by Unicorn, £20
By Connexion journalist

Fifteen years ago, my husband and I, through extraordinary good fortune, found and purchased a beautiful but rundown small farm in a remote region of France.

Soon we set out with a car, stuffed with things we no longer needed in London, plus our two daughters, to spend our first summer in the Ardèche.

Those weeks turned into a year and then two years. As our girls learned a new language and the French way of life, I learned how to live away from the city and traded my high heels for muddy boots and a garden trowel.

It is an adventure that continues to this day and has inspired me in ways I would never have imagined.

It was the neglected land that drew me in: the many terraces descending towards a small river, covered with pine trees, semi-dry water wells and bramble. I dreamt of transforming this dying, overgrown ruin of a farm into a garden.

It took a very long time but eventually I lost my romantic illusions and understood what the locals already knew: life on this land can be hard but also very rewarding. Everything people did had a purpose and it was all connected to their land.

My semi-successful efforts to preserve our many crumbling terraces, to prune old fruit trees and to introduce new plants, led to grudging respect.

Soon, our neighbours asked if they could use our cherries, quinces, walnuts and our water. In return they gave us quince paste, chestnut cream and Vin de Noix.

I realised how imaginatively the local produce was used, how the many family rituals were linked to the local cuisine and how strongly everyone was attached to the terroir, their countryside.

As a sideline, some wine growers would replant old vines and, thus, some forgotten and sometimes forbidden wines made a comeback. We tasted them during those long ‘apéritifs dînatoires,’ and it was there that I became intrigued by how people live, cook and think.

Nathalie Jacques, now a close friend, mentioned that her mother has vast knowledge of all the traditional recipes. When I first met Mado Jacques, she stated with genuine modesty that she knew everything ‘autour du cochon’. At that very moment the idea of writing this book was born.

I asked everyone, who was willing to share his or her knowledge about Ardèche cooking, to make some special dishes.

Then I convinced this private community to let me be a witness with my camera.

Later, I realized that we had no vegetarian dishes because, traditionally, the cuisine is centred on pork.

Also, there were hardly any fish dishes, because many of the rivers no longer contain enough fish. Fishing has become a sport and fishermen do not provide their families as before. As you will see, we filled those gaps.

I feel most fortunate that my friends shared with me some of their favourite memories and secrets of this out of the way region.

Maybe they shared because I, a foreigner, was so deeply interested in the complex challenges of their unique rural lifestyle. I find it even more fascinating to see how this traditional cuisine is reinventing itself.

The amazing and productive friendship with Guillemette Aubry, who lives the extremes of town and country between Paris and St.Michel de Boulogne, developed out of this great adventure.

Whether rooted in the Ardèche or more loosely connected to this beautiful country, two things unite all the cooks who gave so generously with their hearts, their spirits and their time: the hope that these very personal recipes might not be forgotten and possibly inspire others to experiment with new ideas and ingredients.

Regina reveals the stories behind the three recipes opposite and provides some tips for sourcing authentic ingredients.

The Tajine is the quintessential Moroccan dish. Its name alone evokes the scents of the Maghreb and visions of dishes cooked slowly over charcoal fire.

The duck recipe, however, is made with ingredients from the Ardèche and only uses the Tajine cooking method.

The most difficult part could be sourcing the marrons confits or glazed chestnuts if you are not in the Ardèche.

Better to order them online from Clément Faugier www.clementfaugier.fr  or from Maison Imbert, www.marrons-imbert.com .

In Largentière, in a former Magnanerie, a large house where silkworms used to be grown, is L’Ardéchoise  (www.lardechoise.net ), one of the best shops to buy truly local chestnut products.

The enthusiastic and sympathetic owner Frédéric Lavesque will show you his chestnut sorting machine and will let you try his crème de marrons, which is made with less sugar and no vanilla, because according to him chestnuts from the Ardèche do not need additives to enhance their taste.

The only chestnut product you won’t be able to buy at L’Ardéchoise are Marrons Glacés because this delicacy is made with Italian chestnuts, the Marrons de Naples, which do not go soft when cooked in sugar but keep their texture underneath a crispy icing.

Crique is one of the quintessential dishes of the Ardèche. There are hundreds of variations of this flat cake of grated raw potatoes, garlic and eggs. For a good crique, it is important to make it crispy on the outside and soft on the inside.

You will see that this dish is easy and fast and can even be made in advance. It is an important contribution to any picnic.

We have used Arlie potatoes because of their taste, their distinct white-pink colouring and because they are grown on the Plateau ardéchois.

The sweet taste of chestnut

The chestnut is called maroni once it is used in patisserie. However, in order to get to the good part of the chestnut, one has to peal off the hard outer skin with the help of a small, very sharp curved knife.

The second and softer skin only comes off after the Maroni have been steamed and are still boiling hot. This will be painful for your fingers but well worth the effort. Then the small creases have to be cleaned before the fruit can be processed into wonderful sweet or salty dishes.

Fillet of duck and glazed chestnuts

1.   Rub the meat with the coriander, then with oil, salt and pepper. Brown it in a frying pan in butter and oil. Lightly coat it with some of the syrup of the chestnuts. You could add some chestnuts to the syrup in order to thicken the sauce.

2.   Place it in the oven in an ovenproof dish for 20 minutes. Do not forget to baste the fillets with the chicken stock. The fillets are normally eaten rare or pink, but they can sit and wait for a little while. Towards the end, add chestnuts according to your taste, but count at least two per person.  Dribble some lemon juice over the meat.

3.  While the meat is in the oven, prepare some seasonal vegetables to accompany the meat, such as carrots, turnips, spring onions, Brussels sprouts, pumpkin, garlic. Cut the vegetables into smallish cubes and brown them in butter in a Tajine dish.

4.   Afterwards pour in the chicken or vegetable stock, add a branch of thyme and cover with a lid. Cook for about 30 minutes. If you wish, you could add some small boiled potatoes in the last 10 minutes. Serve together with the meat in the Tajine dish.

5.   An alternative way of making this dish is to add the chestnuts to the vegetables rather than to the meat. Or, you could replace the duck with pork fillet or leg     of lamb. In the latter scenario, it is important to coat it with a white wine-bouillon-thyme mixture.

Ingredients, for three or four people as a side dish

1.   Peel the potatoes and grate them and immediately add salt to prevent browning. Mix the potatoes with the beaten eggs, the pepper, the squashed garlic cloves and the parsley.

2.   Heat vegetable oil in a small non-stick frying pan and shape the potato mix into small flat cakes. Brown the crique well – at least 5 minutes – on one side then, turn over with the help of a lid and repeat on the other side.

3.   Decorate with parsley and serve hot or warm with a crisp salad.

2.   It is best to use a square cake mould. This will make it easier to cut the cake into small squares. Grease it with butter and powder it with flour. Beat the egg whites  very stiff and fold them gently into the chestnut mixture. Pour into the mould and spread it out gently.

3.   Bake it for a minimum of 30 minutes and test from time to time with the point of a knife. The cake is ready when the knifepoint comes out clean.

4.  Leave the cake to cool off, but take it out of the mould while still quite hot.

5. Can be eaten cold or warm and we suggest serving it with a lemon sorbet.