The truth about French vigneron subsidies 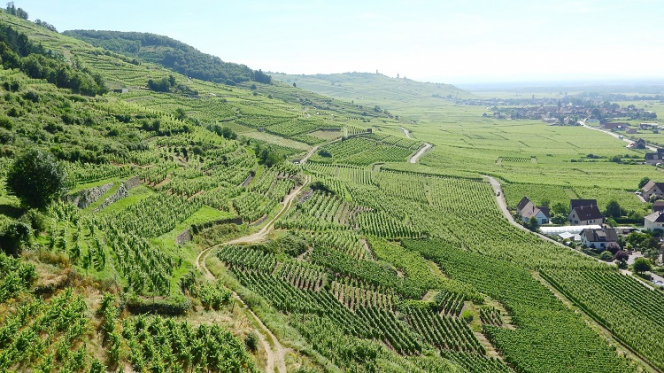 Every now and then I hear people from outside the wine industry making remarks about French vignerons living on subsidies and grants, paid for by the taxpayer and the EU.

So I thought it would be interesting to write about what subsidies or grants are available to vignerons and what they have to do to get them.

In France, viticulture is not covered under the EU Common Agricultural Policy that pays farmers every year based on the amount of land they own. Vignerons can only apply for grants and subsidies for investments or improvements.

The most common of these is replanting vines. The French state keeps very tight control over the planting of vineyards. Every single plot is measured to the nearest square centimetre and recorded on a government database along with its regional designation for wine production, Appellation d’Origine Protégée (AOP) or Indication Géographique Protégée (IGP).

When a vineyard is due to be replaced the owner needs to file a request for arrachage, the grubbing up of the plot. Government surveyors physically check the surface area and make sure that it has vines growing in it. A seven-stage administrative process has to be followed, involving two separate government departments, the douanes (customs and excise) and FranceAgriMer (Ministry of Agriculture). Once approved, the vineyard can be grubbed up and a grant of around €500 per hectare covers costs.

There have been times, in certain areas, where additional money was granted to grub up vineyards and not replace them. This is done to reduce production of wines which don’t sell easily or only fetch small amounts of money. That explains the presence of large amounts of unplanted vineyard land in the Languedoc-Roussillon.

There have also been cases when the government subsidised replacing one variety with another, the aim being to encourage vignerons to plant what the state regarded as more commercially viable varieties. For example, in the 1990s and 2000s Carignan, Aramon and Alicante were replaced by Syrah, Mourvèdre, Cabernet and Merlot in Languedoc.

This has led to the production of more palatable cheap wines from the co-ops and bulk-wine producers but also the disappearance of old varieties like Terret and Carignan Blanc.

A similar process takes place for planting but this time there are strict rules on which grape varieties may be planted, the spacing of plants, the timescale and finally the existence of planting rights.

In the past planting rights were held individually by vignerons and created by grubbing up. In the last few years a new system has been introduced to remove the market in trading planting rights between vignerons. Now the state owns the planting rights and distributes them as and when they are required.

Each wine region has a limited amount of hectares that can be planted according to its AOP or IGP. So it is not easy for a vigneron to expand their production of a given type of wine. As long as the farmer follows the procedure correctly, they are given a grant of several thousand euros per hectare to go towards the costs.

Those costs are significant because vines need to be grafted onto American vine rootstock before planting to protect them from phylloxera, the louse that eats their roots and kills European vines.

Then there are three years of vineyard management to get the vines established before they produce a crop and the additional cost of constructing trellising.

It is worth noting that Spain and Italy have chosen to include viticulture in their farming subsidies which are paid out based on land farmed. This means that wine can be produced more cheaply in those countries than in France.

It is contentious because it appears to contravene EU rules on fair trade and has led to the import of large quantities of cheap wine, primarily Spanish, by négociants, who have been accused of selling the wine as if it were French. In some cases they use packaging and shelf-placement in supermarkets to make it look French but there have been cases of  illegal labelling of foreign wine as a AOP or IGP.

The négociants are also accused of selling the imported wine to thousands of tourist restaurants and cafés who serve the wine, knowingly or not, as French wine by the glass or carafe. Militant vignerons in the Languedoc, who are hurt most financially by this practice, have taken actions verging on terrorism, such as emptying the tankers transporting the wine or attacking the premises of négociants believed to be involved in these practices.

There are a few other ways in which the government subsidises viticulture. The first is to give Jeunes Agriculteurs (those under 40) extra money for planting and for purchasing equipment. The idea being that it helps and encourages younger people to become vignerons and therefore rejuvenates the industry.

The purchase of certain types of environmental vineyard equipment are subsidised. These include sprayers which capture and recycle the sprays, ploughs which can remove weeds under the vine, mulchers and mowers which reduce reliance on herbicides.

The conversion to organic viticulture is also subsidised and once certified, organic vignerons are eligible for further subsidies.

So while it’s true that viticulture is subsidised by the state, the subsidies are to regenerate the vineyards, improve environmental standards and encourage better practices. They are not simply hand-outs to allow vignerons to live in the lap of luxury.

Jonathan Hesford has a Postgraduate Diploma in Viticulture and Oenology from Lincoln University, New Zealand and is the owner and vigneron of Domaine Treloar: www.domainetreloar.com