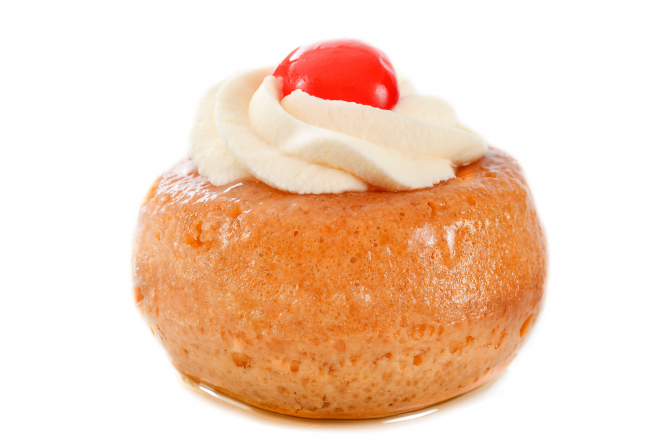 The widely accepted story goes that Babas au Rhum were officially invented in the early 18th century when Louis XV's father-in-law, the King of Poland, came to stay in Nancy. Finding the local cake too dry, he asked for it to be soaked with Hungarian Tokay wine.

The Rum Babas as we know them today were created later in Paris in 1735 thanks to the King's former pâtissier, Nicolas Stohrer. Wine was replaced with rum, and the recipe later adjusted by mixing the rum with sugar syrup.

Though the rules around how many people you can have over at Christmas are yet to be determined, you could make your rum babas festive by adding dried cranberries - even if you do end up having to eat them all yourself.

Some recipes call for a yeast dough, but this recipe is easier and quicker. Use either a bundt pan or 'moule couronne', or individual moulds.

Preheat the oven to 180 degrees.

Whip the egg yolks and sugar until the mixture is white. Fold in the milk, melted butter, flour and baking powder.

In another bowl, whip the egg whites into stiff peaks, and fold them gently into the batter. Tip the mixture into a bundt tin or into individual moulds if desired.

Bake at 180 degrees for 25 minutes. Warm the syrup with the water and rum and remove the baba from the mould. Slowly pour the syrup over the baba until it has absorbed it all.

Serve with whipped cream and a glacé cherry

Catch up with the rest of the regional recipes in the series in our Food and Drink section. Tomorrow we'll be journeying to Nouvelle Aquitaine for a classic clafoutis!