Truffle season starts in France with quantity down but quality up 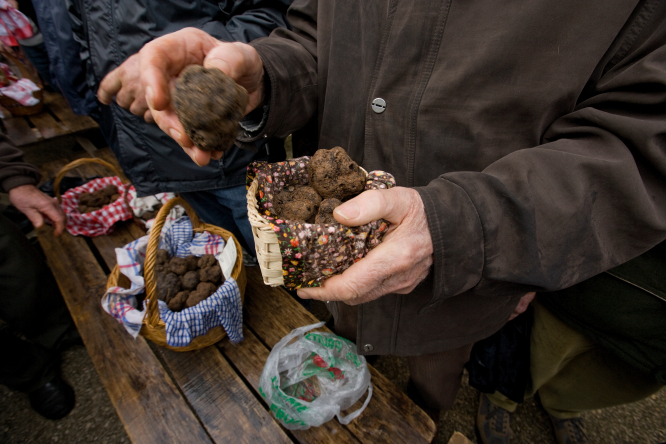 The truffle market in Lalbenque is one of the most famous in France, as the season begins with a low yield but good quality this year Pic: Philippe 1 bo / Shutterstock

Truffle season is here in France, with the harvesting of the prized tuber taking place over four and a half months from November to February, with yield down 50% but quality up.

The Perigord black truffle is harvested from November onwards, mainly in the southwest of France, but there are also other smaller regions where it can be found. The height of the season comes as Christmas approaches, for which it is an in-demand, luxury product.

Experts this year say that although the harvest is set to be very limited, the tubers that are picked will be of exceptional quality.

The prized black truffle of Haut-Var was priced at €600 per kilo at the first market of the season – in place Mistral in Aups, Var – which opened on November 21, at 09:30.

This is one of the highest prices on record. Last year, the same crop was priced at €400 per kilo at the same time.

Experts have even predicted that prices could reach €1,000 per kilo by Christmas.

The conditions have been caused by the weather, with a wet spring, but relatively cold and dry May and June, explained Philippe De Santis, president of Var truffle growers’ union le Syndicat des trufficulteurs du Var.

He told Nice Matin: “It was cold quite late...and then there was very little water from May to the end of July in many Var communes. This causes a very mediocre season in terms of truffle quantities. We are below average.”

Many truffle markets will open across the south of France in December and January as farmers, chefs and food-lovers unite to sell, buy, and savour the new crop.

The most famous truffle markets include Montagnac Montpezat, Valréas, Carpentras, Lalbenque and Richerenches, in the regions of Occitanie and Provence-Alpes-Côte d'Azur.

The Provence region produced the highest volume of truffles in Europe last year, with 32 tonnes sold.

Prized Italian white truffle now to be produced in France

Who still has to pay the taxe d’habitation in France in 2022?
22 January 2022
More from Food and Drink
More from Connexion
Get news, views and information from France
Join the newsletter
Subscribe to The Connexion