There is a replica of Colmar... in Malaysia 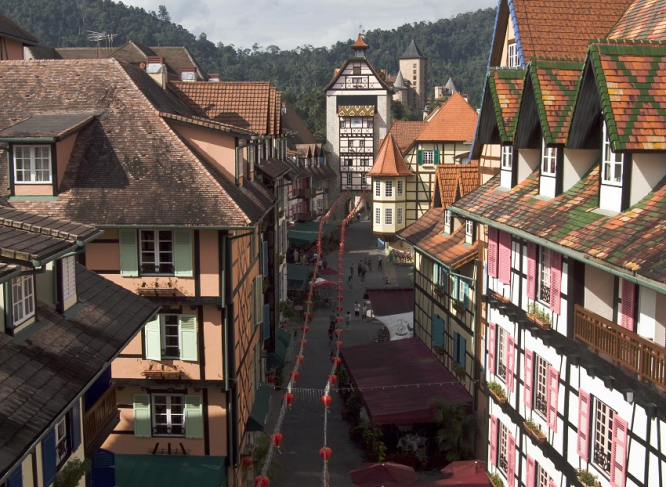 In the jungles of Malaysia, a 45-minute drive from Kuala Lumpur in the Berjaya Hills, 3,000 feet above sea level you can find, amongst the lush tropical vegetation a village which would seem more at home in the more temperate climate of France. It is a replica of the 16th century French town of Colmar in the Haut-Rhin, complete with half-timbered façades and its own boulangerie.

Colmar Tropicale was built after the current prime minister of Malaysia, Tun Dr Mahathir Mohamad visited and fell in love with the town of the same name in Alsace. On his return he persuaded Vincent Tan, the owner of one of the country’s largest conglomerates, the Berjaya Corporation Berhad, to build the reconstruction as a major tourist attraction.

The 16,000 acre site has accommodation in over 235 rooms and suites in the “16th century typical French village”, and also in a “castle” based on the medieval château du Haut-Koenigsbourg, 26km north of Colmar.

In the “village” you can sample French cuisine in an “authentic French fine-dining restaurant”, La Cigogne, buy croissants at La Boulangerie, drink at a bar called Le Vin and eat
at a restaurant specialising in roasted chicken, called Le Poulet Roti.

The replica has the half-timbered tall buildings, with steep sloping decorated tiled roofs reminiscent of Colmar but not an exact replica, according to Head of Communications for the real Colmar tourist office, Emmanuel Fromm: “As far as I understand it there is just one street in the style of Colmar and the resort is a mixture of key elements from Alsace’s typical architecture.”

KC Lee from the resort’s public relations office confirmed it was purely a tourist attraction but was not able to say what their visitors enjoyed about staying in a French style village. It is designed as a luxury resort attracting city dwellers to a more peaceful environment.

The replica chateau, though medieval in style prides itself on being ultra-modern and the world’s first organic spa and wellness resort, with every detail organic including the hand towels, the welcome drinks offered to the guests on arrival, the 100% organic bed and linen and toiletries made from hand harvested seaweed from Ireland. Three organic farms, created for the resort, provide produce for the kitchen.

In the same resort there is also a golf course, conference centre, adventure park, zoo, botanical garden and if you are not seduced by France you can instead stay in a Japanese village with its own Tea House and botanical garden.

A more authentic visit would be to the real Colmar, nearer to home and which is full of architectural treasures – see here also.