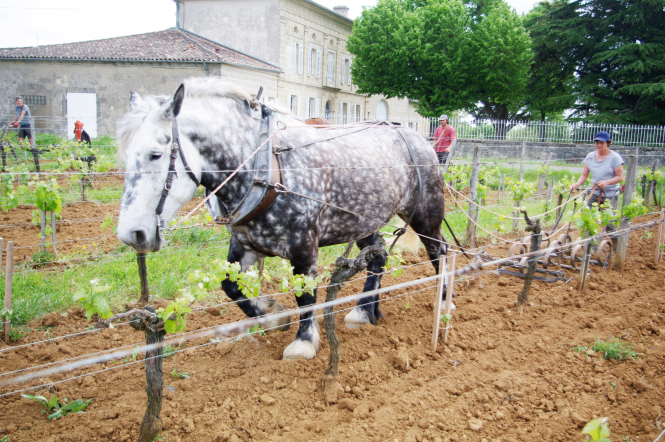 When Château le Puy started using horses it was driven by necessity and they have helped save the vineyard, which has been producing wine without a break since 1610.

In the 1980s, vines began to suffer from black rot, a fungal disease that is one of the deadly maladies de bois. For years the accepted treatment was spraying with an arsenic-based fungicide but this is now banned and was not acceptable to Château le Puyand its organic permaculture practices.

Black rot thrives in wet and humid conditions and when agronomist Claude Bourguignon was called in to advise he said tractors were to blame.

The vineyard in the small Côtes de Francs appellation sits at 140m in the highest spot in Gironde department, and has just 60cm of light red-brown clay soil sitting on limestone bedrock.

Mr Bourguignon, one of the first scientists to warn that modern agricultural methods were devastating micro-bacteria in soils, traced the problem to excessive standing water in the vines, caused mainly by the compaction of the clay due to tractors driving in the same ruts between the vines.

“The problem was not so much the weight of the tractors – a horse weighs pretty much the same as a tractor, but that tractors always had to drive over the same place,” said Harold Langlais, the chateaux commercial director.

“With a horse, it never puts its hoof in exactly the same place. We were a bit sceptical but we started using horses, initially hiring in teams, and the black rot problem disappeared. From 2000 we started using our own teams.”

Now the vineyard has four horses, two Percheron breed, one Auxois and one Breton. It also has two meneurs, Eric Rambaurg and Pierre Lheureux, and one meneuse, Anne Sophie Lebrun, who look after the horses and drive them as they pull the tools through the vines.

Eric and Anne Sophie have been with the chateau for many years, while Pierre has just started work there.

Two of the horses are owned by Mr Rambaurg but live at and are looked after by the chateau, the others were bought by the estate.

The vineyard now has 55 of its total 100 hectares dedicated to wine production and the horses work 12 of those hectares, the areas which are most susceptible to soil compaction.

Rather than living in stables, they live all year in a pasture on one of the plots where vines were uprooted as the property moved to a permaculture model. Unlike many of the riding horses seen in fields in winter, they do not have covers in winter either, being robust enough not to need them.

And they spend most of their time, when they are not grazing, in a wooded glade with an ancient stone circle and two dolmens, dating from 3000 years BC.

Mr Langlais said: “Having the horses is a celebration of life which we practise through our methods and seeing them here, where humans have been living for 5,000 years, at least, is special. They could choose any spot in the pasture or the wood, but they prefer to be here.”

The horses walk down to a small, spring-fed reservoir to drink.

While working their six-hour days, they are fed supplementary rations of grain concentrates to replace the calories and lack of grazing. When it rains, the horses stay in the pasture, as it quickly becomes too slippery for them to work.

They are used on specific tasks: the ridging of the soil around the vines in autumn, carassonage, and de-ridging in spring, and the cultivation of the soil between the rows and vines in the spring and summer.

“Not every horse is used for every task, for the ridging you need old experienced horses because if you are not very careful you cut through the vine, while for the cultivating a young strong horse, full of vigour is ideal,” said Mr Langlais.

Usually they work for three hours in the morning, then are unhitched but with the collar harnesses left on at lunch, and then another three hours in the afternoon. After work they are brushed, fed and looked after for an hour by their meneur or meneuse.

Being herd animals, horses have their own social dynamics, which caused heartbreak when a horse, bred at the chateau, was taken away for a year to be taught how to pull. When she returned she was rejected and killed by the others.

Old tools, are used or, occasionally, new tools made as copies of the old, although meneur Eric Rambaurg is working on inventing a horse-drawn version of a tractor tool, a fouilleuse, used to work the deep soil while leaving the surface untouched.

They are hitched to new harnesses, with metal frames, to transmit the horse’s power and allow it to pull the 50kg load of the tool.

Seeing the horses at work – when Connexion visited they were using a Canadian cultivator to work the soil and get rid of grass – you sense their great power.

One is struck too by the lack of noise. The thud of hooves, scraping and rattling of the implements and gentle commands are a far cry from the roar of a diesel tractor.

Many of the old tools are being used by horses for the first time as oxen were the traditional draft animals in most French vineyards.

However, the chateau has not found a way to use the horses for spraying, meaning the plot used for its most expensive wine is sprayed by hand. Other plots have two horse-cultivated rows, followed by one left grassy where a tractor is used.

Most of the sprays are plant-based, with horsetail, willow bark, camomile and nettles featuring, and are boiled up and prepared in place.

Mr Rambaurg said: “The horse is trained to pull the weight, not to look after vines – it is the humans who do that. There is a bit of physical effort for the human, too; you have to be in good shape.”

This physical outdoors lifestyle is very different for a man who switched from being an ébéniste cabinet-maker. Mr Rambaurg took courses at agricultural college and there are dozen or so with horse care on their curriculum, and some specialise in draught horses.

The question of how much more it costs to use horses rather than a tractor, remains hazy. Mr Langlais says the estate estimates they are 30% more expensive than a tractor, but Mr Rambaurg said a detailed breakdown for the 2016 vintage showed they cost 35 centimes per bottle, not much more than a tractor.

“In any case,” Mr Langlais added “here, we had no choice because of the soil and the black rot.”

It all looks fairly reasonable compared to a €70,000 tractor, burning four litres of diesel an hour and with a 15 year working life, but the big difference is that the tractor works much faster and is more versatile.

Mr Langlais summed up: “As far as we are concerned, the use of horses has been a great success.

“Our big problem is finding people to work with them in the vines, not the horses themselves. There has to be a communication between man a horse or it just does not work.

“If you come back in five years, I am sure you will see more than four horses here at Château le Puy.”

The real reason roses are planted beside vines

Many vineyards have roses planted at the end of vine rows and it is often said this was to keep horses straight, because the horses would want to avoid the thorns. Mr Rambaurg  laughed at the idea: “If these horses see a rose bush they eat it!”

But the roses do serve a function. They get black spot and other fungal diseases quicker than vines and so show when a spray is needed.