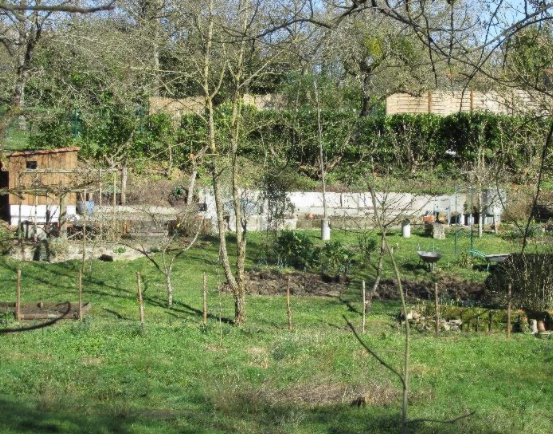 When we first escaped to France, leaving behind busy lives in a school and a hospital, we decided to rent a house and bide our time.

It didn’t prove initially very easy to find something in our chosen triangle, in the South Vendée, until one fateful day.

We had had to persuade the immobilier to take us to see the property, as he kept telling us it was in the middle of nowhere, he was even reluctant to get out of the car when we got there. But to cut a long story short it ticked most of the boxes, and when he opened the back shutters the view of the chateau convinced us that this, a largish, fairly primitive, farmworkers / managers house, was where our French dream would start.

One of the unticked boxes was a vegetable plot, and as we were leaving, we asked Pierre the immoblier, if he thought we could dig up some of the large rough front courtyard, only part of which was gravelled.

Somewhat puzzled he asked us why? When we said to grow some veg, he said somewhat surprised “You want a garden?” When we answered in the affirmative, he turned swiftly around and marched off out of the front of the courtyard and down the road. Some 50 metres down the road he disappeared into the overgrown hedgerow, opened a large rustic gate that hung on its supports at a jaunty angle, and pointed inside – “Here is your garden for you to enjoy and do with what you wish!”

Well, the position was superb, behind a large hedge bordering the road, it was a long thin triangle cut out of the cow field, with another hedge at the bottom, and the other side demarcated by a single strand electric fence, over which the view was rural, calm and wonderful, despite it seeming a little flimsy to hold back the extremely large and inquisitive Charolais cattle in the field beyond.

The garden however, was somewhere beneath the metre high matted grass and weeds, and showed little evidence of any recent cultivation other than a tumble-down shed housing some old pots, stakes, twine and other gardening detritus. There were four spindly fruit trees, which as it was spring time added some colour with their blossom to an otherwise rather bleak scene, but it ticked the garden box!

So soon after we moved in, the garden became a priority to make the most of the growing season. The first problem was that we only had an electric strimmer, and finances at the time were a little tight, so we had to find a way to run a power cable, or more precisely four (but we had left health and safety behind with our jobs in the UK!), into the garden.

The task was daunting and I imagine even more so for the rather underpowered strimmer that was more used to the edges of a suburban lawn.

But, both the strimmer and ourselves rose to the occasion and with plenty of cooling off periods for both ourselves and the inadequate strimmer, and with the help in places of some sturdy hand tools we found the ground!

It was also at this time that we found it was rather prudent to wear both long-sleeved tops, long trousers and stout wellies, as some of the accumulated growth was far from friendly and we realised snakes were rather more common here than in the suburban garden we had left behind in England!

Other nasties came later with the fruit in the form of wasps and large fearsome hornets, by which stage we were beginning to wonder if we had done the right thing, but a glass of wine sitting outside as the sun went down soon sorted that one out.

We then sorted out the layout of the beds, leaving a fair amount of lawn, much to the disgust of our long-suffering strimmer, and commence the back breaking task of turning the soil and turfs over, raking the soil into a fine tilth and getting some plants in. Fortunately, the underlying soil remembered a time when it had previously been cultivated and this made it a little easier.

We produced plenty of fine tasty food, as well as too many courgettes, and had many an adventure in that tamed wilderness, including a pair of leverets that went to ground among the onions and conversations over the fence with our bovine neighbours, during the two-and-a-half years that we lived there, and just occasionally had time to sit and admire the view, before buying our own place and moving on to pastures new.

Well actually a garden 50 metres down the road from our new abode, and about 350 square metres of chicken sheds, rabbit hutches, rusty metal, random thick concrete areas, all ham-built and buried under two metre-high brambles and other assorted mal herbes.

It was all surrounded by a multi-layered fence containing several layers of chicken wire, green wire fencing and sheets of thick plastic.

It might have all been somewhat ham built, but the previous owner was a little eccentric, and liked to add strands of wire and a plethora of nails, screws, fencing staples and bolts. On one fence post alone, at an idle moment I counted well over 100 fastenings holding on the various layers – did I say eccentric, mad might have been a better description, which is why it took us nearly three months to raze everything to the ground, before starting on the house renovations!

All that remains now is the question we are often asked, bearing in mind the house somewhat reflected the garden – “Would we do it all again?”, to which we give a resounding …. NO!, twice is sufficient! And, still we rarely have time to sit and appreciate our newly tamed garden, but the produce is worth the effort, as well as giving us the energy for the next weeding session!

Franglais ou Frenglish? The history of French resistance to English
15 June 2021
More from French Life
More from Connexion
Get news, views and information from France
Join the newsletter
Subscribe to The Connexion