The Concorde pilot, the King and the ancient French building 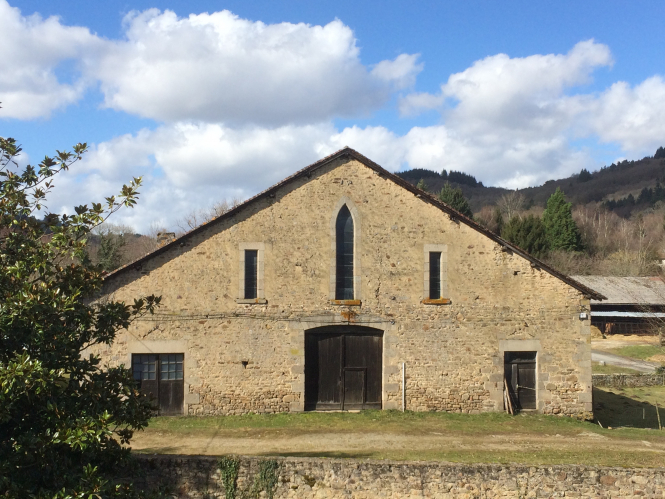 Heritage Days will literally open the doors of historical buildings all over France on September 19 and 20, allowing the public to explore them and enjoy their shared cultural heritage.

The annual European Heritage Days offer an opportunity to explore fascinating historical connections - often the more tenuous the better.
Did you know that there is a connection between the England's King Henry II and a Concorde pilot, for example?

The Grange aux Moines (Monks' Barn), near Ambazac in Haute-Vienne, is the last vestige of the thriving Abbaye de Grandmont. It was built in 1125 following a Byzantine series of intrigues, betrayals and subterfuges which would fill a book on their own. Suffice it to say that the Abbaye was constructed, and became such a centre of power that Henry II of England, who was also the Duke of Aquitaine via his marriage to Eleanor of Aquitaine, used the Abbaye as a operational base for controlling the Limousin, and multiple copies of the building were constructed in other locations.

Over the centuries, the Grange aux Moines was used as an agricultural barn, a courthouse, and a storehouse for tithes. In the 15th century, the Huguenots took possession of it during the siege of the Abbaye de Grandmont, and the barn remained a Protestant temple until 1604.

The Abbaye was destroyed in 1778, but the barn survived. During the Revolution it was used as a home for numerous families, and in 1792 it was sold to "citizen Blaise Tayac" who subsequently abandoned it. In 1846, several owners later, and already in a parlous state, it was acquired by Etienne Wast Gay and has been in the family ever since.

For 40 years it was allowed to fall into ruin and it seemed as if the only solution was to pull it down, especially when in 1978 the western facade suffered a partial collapse.

But the family were aware of the barn's history and in a last-ditch effort to save it, they consulted government body Bâtiments de France, whose architects confirmed its historical significance.

The fight was on to save the barn and the first step was to form a not-for-profit association and to raise funds for the significant amount of work needed. Substantial works were carried out in 1980 to replace the roof and secure the building, and then in 1984 the association won a grant which allowed them to install a floor and begin organising concerts.

That is where Patrick d'Haussy, the Concorde pilot, entered the picture. His story is equally fascinating.

"I became a pilot by accident," he said. "A friend at school persuaded me to enter a couple of exams, just for practice.

"We didn't expect to pass them, to such an extent that we barely bothered to find out what they were, so when we passed and discovered we'd got into flying school, no-one was more surprised than us!

"My friend turned his place down, but I went for it and formed a lifelong passion for flying. Even now, if I don't fly for a week, I get ill."

He ended up flying for Air France, and when he saw an opportunity to fly Concorde he jumped at it. "Other pilots said I was mad to swap being pilot-in-command for a job as co-pilot but to me it was the start of 6 years of pure joy.

"Words can't express the sensation, the first time I flew in Concorde.

"It was an extraordinary plane not just technically but in terms of the luxury it offered. We talked to all the passengers, rock stars, royalty, everyone - and we were treated like stars, too. The ground staff would call us on the radio from New York to ask what we'd like to eat on the return trip."

He flew Concorde from 1989 to 1995, and was part of the 16-strong crew which set a new round-the-world record in 12-13th October 1992, when they flew Concorde (the B-BTSD to be precise) westwards round the world in 32 hours 49 minutes and 3 seconds. They set off from Lisbon at 7h54 on Monday morning, and having made stops at the Dominican Republic, Acapulco, Mexico, Honolulu, Hawaii, Guam, Bangkok, Thailand and Bahrain made it back there at 4h55 on Tuesday having covered 25,063 miles and been in the air for 23 hours and 7 minutes.

The record-breaking flight had been timed to celebrate the 500th anniversary of Columbus' arrival in the Americas. Lisbon was chosen because the airport was the nearest to Columbus' port of departure in Palos de la Fontera, in Spain.

"It was extraordinary. Going west, we were flying so fast that we caught up with the sun, and saw the same sunset all over again," he said.

"Being a Concorde pilot was incredible. We always had to have one pilot available just to do interviews with the press, and we were always being asked for autographs.

"In France, there was a residual feeling that Concorde was merely an expensive plaything for the rich, but outside France it was seen as an amazing adventure. In a way, I think the British kept Concorde flying long after the French might have abandoned it."

The Air France Concorde schedule was limited however in terms of destinations, only flying scheduled between Paris to New York.

Occasionally, billionaires would hire it to fly somewhere else but for the most part Air France Concorde acted as a trans-Atlantic shuttle. "It was a dream. We would take-off from Paris at 11h, arrive in New York at 9h and passengers like the CEO of Fiat used to go to New York, work until 13h and then catch the plane back to Paris. But the world has changed..."

Concorde remained in service from 1976 until 2003, when it was retired for a variety of reasons including the rising cost of aviation fuel, reduced demand from passengers following the 9/11 attacks, and the accident in Paris on July 25, 2000, when Concorde F-BTSC crashed shortly after taking off from Charles-de-Gaulle airport bound for JFK in New York, killing all 100 passengers and 9 crew members on board plus four people on the ground.

By that time Patrick had become an instructor, and taught Air France pilots to fly planes such as the Airbus 300, 320, 318, and 319 until he retired.

"I loved it because I love flying, and I discovered I also love teaching. I spent the last 10 years of my career teaching.

"It's almost better than flying as a pilot. I preferred training young people rather than experienced pilots. One amusing thing that happened, was that one of the pilots I trained ended up marrying my son, who is also a pilot. But I met her first! They only met up after I trained her. Another amusing thing happened on a flight when one of the pilots in the cockpit called me Papa, and everyone's eyebrows went up - until I explained that yes, he was actually my son!"

A career as a pilot hadn't left much time for Patrick's second grand passion however - which is music. "I always thoroughly admire people who can make music because I've never had the time to learn properly myself," he says, although he plays both piano and guitar. So when the Association managing the Grange aux Moines, which belongs to his wife's family, ran out of steam it was just the right timing and he stepped in as president of the association.

"We've increased membership, and now run a programme of concerts all summer long. It's a mixed offering, musically speaking, including jazz, classical and world music. Eventually the aim is to have concerts all year round, but we'll need to complete some more work first. In the longer term, the plan is to extend the existing facilities (performance hall, bar and foyer) into the rest of the barn, which is 800 sq metres in total, so we can host artists' residencies and make the Grange aux Moines into a real cultural centre for Haute-Vienne."

In the meantime, Patrick is still teaching people to fly. "Now I teach people to fly light aircraft, the smallest there are, but it's the same passion."

Read more: The ex-Nato airbase where pandemic planes were stored