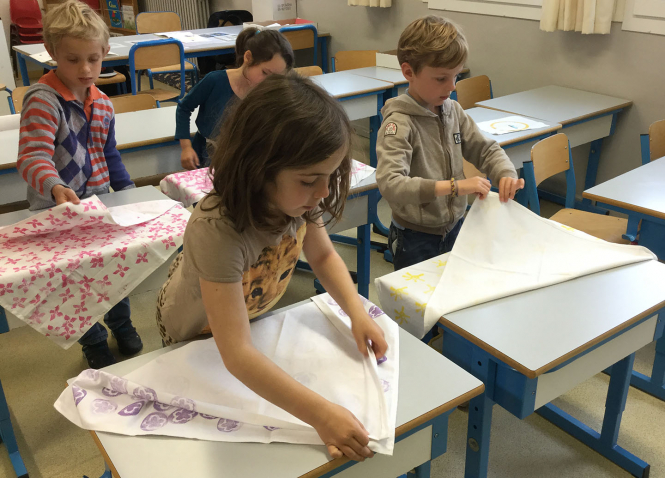 Ms Marec promises it is easier than origami: “The material must be square. You can buy special Japanese squares, make your own by cutting out and hemming a square or use old scarves you may have in the back of a wardrobe
By Connexion journalist

Furoshiki, the ancient Japanese art of folding and knotting material to wrap presents or carry belongings, is growing in popularity in France. It is heralded as one of the ways to celebrate an eco-Christmas to avoid contributing to the estimated 20,000 tonnes of wrapping paper bought and thrown away each festive season.

A few years ago, no-one had heard of Furoshiki, but now you can attend workshops, read about it in magazines and follow tutorials on YouTube.

Aurélie Le Marec created L’Atelier du Furoshiki in 2009: “It was not until 2014, that people began to be interested, with the rise in awareness of the need to produce less waste.

'I have always been very worried about over use of plastic and paper rubbish, and from the very start I was convinced furoshiki would develop in France'

“I have always been passionate about Japanese culture, and learnt about the existence of furoshiki in connection with the traditional tea ceremony. I have always been very worried about over use of plastic and paper rubbish, and from the very start I was convinced furoshiki would develop in France."

“It is an art which is easy and enjoyable to learn, attractive, and sustainable. I run workshops at the Musée des Arts Asiatiques Guimet in Paris, in libraries, for local councils and in schools, and I have written two books, one for adults and one for children. It appeals to all ages and all cultures."

“Children, because it is accessible to them and fun, teenagers and young people who are more and more aware of ecological issues and older people who remember the use of baluchons, pieces of material, knotted at four corners to make a carrying device."

“Material was used this way not all that long ago in France. It reminds participants from other countries of the techniques used in their home lands.”

The technique dates from the 8th century AD in Japan. It was not called furoshiki, which means “bath spread” in English, until the Middle Ages when a single piece of cloth was used for carrying items to and from the public baths. It went on to be the name used to carry everything from personal belongings to merchandise. The name was also applied to gift wrapping. A whole culture developed around the material chosen for the wrapping so that different colours and motifs represent different occasions, seasons, and the individual tastes of the person receiving the gift.

Furoshiki fell out of favour after the Second World War with the arrival of plastic and other forms of packaging but recently the Japanese Ministry of Environment has encouraged its return.

Ms Marec promises it is easier than origami: “The material must be square. You can buy special Japanese squares, make your own by cutting out and hemming a square or use old scarves you may have in the back of a wardrobe. There are different sizes depending on use.

“The basic knot is the reef or square knot, noeud plat. Most often we lay the material out in a diamond shape and often fold it in half to make a triangle as the basic shape to work from. Then we roll it, fold it and tie knots.”

You can wrap a square book, wine bottle, angular shape, apparently anything once you have learned a few techniques.

“Your present is then two in one as the material is also a gift, and can be used to wrap another present later on. It can be fun to see one piece do the rounds in a family or amongst a group of friends.”

Furoshiki is not just for Christmas though: “You can use one piece of material tied using slightly different techniques to carry objects of different sizes and shapes such as library books, shopping, or sports clothes for the gym.!

“I have two sons and they both use furoshiki to take things to and from all their different activities.”

You can find tutorials at L’Atelier du Furoshiki and elsewhere online.