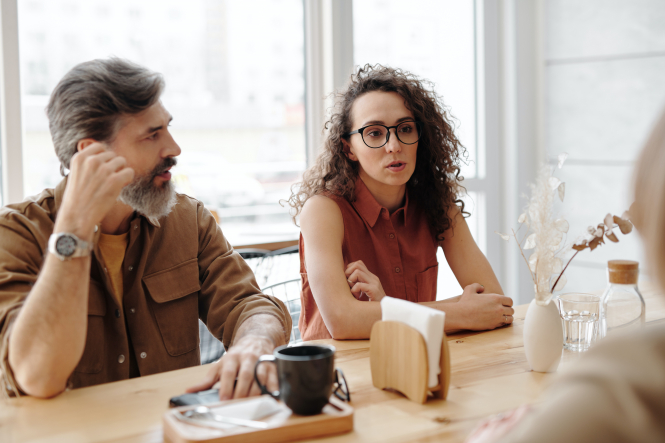 'Language is about exchange' say Nick Inman's French friends, so they advise to not be concerned about how you sound and and to just get chatting
By Nick Inman

For three years, I have taught conversational English to French university students and noticed almost all of them make the same errors in pronunciation.

Some of these can be “unlearned” quite easily, and I devised a checklist of 10 quick fixes to help them do it.

It made me realise that the process could work in reverse.

Despite being competent with the written language, I do not feel I have a natural ear for spoken French and, after 18 years living here, still sometimes hesitate before talking.

So, one Sunday evening, I assembled an ad hoc panel of three French friends – all teachers and experts in their language – for aperitifs and asked what we could do to speak more fluently.

What tips could they pass on to other English-speakers in France who have – or think they have – a problem of being understood?

The results surprised me. I asked them to be painfully honest and was expecting a checklist of errors to avoid. Instead I got a huge affirmation and a few minor tips.

Here is what Arielle, Marie-Paule and Alain advised:

Their first piece of advice was: “Speak! Do not be afraid.” I was brought up with the idea that I will be admonished and corrected if I do not pronounce French perfectly and get my grammar just right. “No,” my friends told me, “we admire you just making the attempt. So what if you make mistakes? Language is about exchange.”

It is important to understand that, as in English, there is a difference between the written and spoken language. The former is not much help with the latter because the spelling does not give a clue to pronunciation. You have to learn every word or phrase twice: first visually, as it is spelled, and then as it is pronounced.

At least in speech you can forget about accents and punctuation, and mistakes you may make are gone forever in a flash. No one is keeping score.

2. Enjoy your accent – the French certainly will

“I’ve got such an accent,” I protested. “How can I improve it?” “Don’t try to lose your accent,” they answered. “Use it to your advantage. We love it. It’s charming. Jane Birkin has made a career of sounding just a little English. Besides, everyone’s got an accent – Parisian, southwestern, Provencal, Caribbean. English is just one more.”

3. Sing the music of French

You’ll keep your accent (unless you are exceptionally gifted) but there is a lot you can do to improve your intonation.

I prefer to think of this as the music of the language. Speech is just a series of vibrations of the air which you adjust to make them easier for the listener to understand without too much mental effort. The aim is to make them as close as possible to what your interlocutor expects to hear.

French has a different stress pattern to English. The emphasis is normally at the end of the phrase and almost every polysyllabic word is stressed differently.

To see what I mean, ask a French neighbour or friend to say photographie and compare it with photography.

If you want to make progress, pick up a few phrases from, say, advertising slogans and practise them in the shower or in the car. Move your lips and pretend to be a character in ’Allo ’Allo!.

4. Give your listener the context

Everyone is self-conscious when speaking a foreign language and it is easy to get obsessed with your performance and not to think of the needs of the person you are trying to talk to.

He or she may be hard at hearing or speaking French as a second language or just thinking of something else. “It doesn’t matter if you get the wrong word,” said my expert panel, “the wrong conjugation or wrong construction, as long as you say enough for us to figure out the context”, to which Arielle added: “And if you make us laugh, even better.”

The evening before, I had been laying out my theory on fixing the world and managed to mix French with Spanish.

Every time I thought I said complot (conspiracy) they heard apple purée (compôte). But they worked out what I was talking about – and I entertained them at the same time.

I insist my students ask questions because this has at least four benefits when you are practising a language:

1. it gets you out of frozen rabbit mode by forcing you to take the initiative;
2. it shows goodwill and interest and is likely to make the other person kindly disposed towards you;
3. you steer the conversation on to a subject you know about so you won’t be struggling with unfamiliar vocabulary;
4. you get a thinking space while the other is answering;
5. you may find out something useful. Forget about the finer points. “But surely if I make lots of grammatical errors, it drives you up the wall?” I asked my friends.

“Actually, we’d rather you didn’t get obsessed with them. They don’t affect the sense.

“Gender, for example, doesn’t matter as much as we think; the subjunctive is useful but not indispensable; and if you never master the difference between tu and vous, no one will be insulted.”

There are some French words I never dare say because I know I will get them wrong. I hesitate over eyes and eggs, for instance.

French vowels have their own peculiar sounds and I cannot distinguish between il pleut (it is raining) and il pleure (he is crying), which are homophones to me but not to a French native. The same goes for désert (desert) and dessert (pudding), and to sin (pécher) and to fish (pêcher). The French have the same problem with ship and sheep, and sheet and sh*t.

There is usually a detour around the problem if you are creative. Je pense qu’il va pleuvoir (I think it might rain) gets the message across even if we are both already soaked. That said, I throw my hands up in despair at au dessous/ dessus (under and over) which have opposite meanings but sound to me the same. A generous amount of pointing usually gets around that trap.

7. Do not utter silent letters

English has many silent letters most native speakers aren’t even aware of. French is even worse: it doesn’t pronounce half its letters. The word “homme” (man), to take one example, has five letters but you only hear three of them (arguably only two).

8. Glide your words together

I secretly suspect that the French know their language is endearing but also ridiculously idiosyncratic.

Marie-Paule is forever telling me about illogical exceptions to rules I have spent hours learning. You just have to be a parrot.

In particular, it is necessary to glide words together. L’ami d’Amy (the friend of Amy) sounds like one word (lammydammy) to me. Ditto Vous en êtes un? (are you one of them?) and many other phrases. To make the gliding work, the language sometimes inserts a letter which serves no other purpose than to aid pronunciation, as in a-t-il du lait? (has he got any milk?), the T being there to avoid an ugly sound.

9. Speak French as He is Spoken

If only French was like it is in the text books. There are a thousand ways in which speakers simplify things without loss of understanding. No one but a literary after-dinner speaker says the ne in je ne sais pas and my friends clip words (ado for adolescent) and cite abbreviations as if I know what they mean.

I could go on laying out advice but in the end you have to trust your brain.

Concentrate on your meaning and the communication of emotion to the person you are speaking to and you will be surprised at how the words fall into place. You know more French than you think and if you put yourself in situations in which you have to speak, those present will be grateful to hear you.

How to learn French online: Five YouTube videos to watch