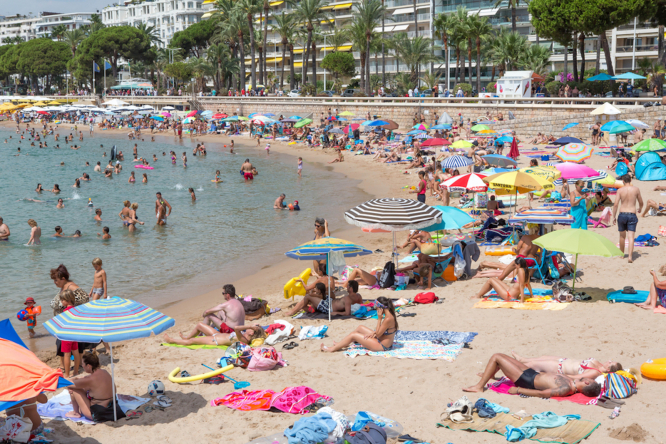 Temperatures are expected to reach 36-39°C in several departments across France this weekend, with five of them now under an amber heatwave warning put in place by weather forecaster, Météo-France.

The Ardèche, Alpes-Maritimes and Var have joined Drôme and Alpes-de-Haute-Provence, which have been on amber alert since Wednesday, August 11.

13 southeastern departments - Pyrénées-Orientales, Aude, Hérault, Gard, Bouches-du-Rhône, Vaucluse, Lozère, Haute-Loire, Rhône, Isère, Hautes-Alpes and the whole of Corsica - have also been placed under a yellow heatwave alert. Authorities are advising people to be vigilant and take appropriate measures to protect themselves from the heat.

So, what better time to try out some French expressions with your family, friends and neighbours? They won't cool you down, but they'll definitely make you sound cool.

Conveying the meaning of 'the sun is as heavy as lead', this phrase is used when it is really, really hot. The English equivalent might be ‘blazing sun’.

This is a colloquial term from the south of France for a sunny spot. You often hear it said that someone or something is en plein cagnard, meaning they are in direct sun.

This means that the heat is very strong – it literally hits you.

This means to be very sweaty. The expression used to be être à nage but has evolved to en nage – referring to the fact that swimming, obviously, makes you wet.

This means to lie in the sun in order to tan  –  like a pancake cooking. It is often used when you go to the beach.

Another expression to mean to stay in the sun in order to tan.

The original expression is dorer la pilule which meant to sugar the pill.

The expression evolved in the 20th century with a meaning of 'to believe in something that does not exist'.

The meaning changed again to indicate 'basking in the sun' during the eighties. Some claim that it is a mix between dorer la pilule and se dorer au soleil (to tan).

Just as in English, this expression meaning 'Indian summer' is used to describe a warm spell of weather in autumn, especially in October and November.

Parisian photographer shows a much darker side of the City of Light
18 October 2021
More from Language
More from Connexion
Get news, views and information from France
Join the newsletter
Subscribe to The Connexion