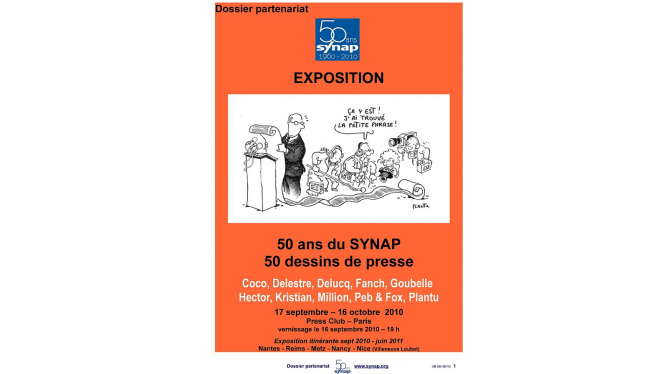 It literally refers to a short phrase (soundbite) spoken by a well-known person as part of a speech, that seems simple but has a big impact and may stick in people’s minds long after the rest of the speech has been forgotten. A historical example given by the French Wikipedia entry on the expression gives “je vous ai compris” spoken by General de Gaulle in Algeria in 1958 as a famous petite phrase or “tear down this wall” by Ronald Reagan, spoken to Mikhail Gorbachev in 1987 about the Berlin Wall.

The entry also says that a petite phrase may sometimes be inserted in a speech by a politician with a deliberate aim of it having impact and being picked up by the media.

More recently – and as in Plantu's cartoon for the 50 ans du Synap exhibition – it seems to refer to certain phrases or choices of words that are deemed to be controversial and to reflect badly on the speaker and which are seized on by the media.

In Plantu’s cartoon we can see the media ignoring the politician’s long speech and instead searching for an exciting ‘little phrase’ they can take out to stir up a scandal.

According to supporters of President Macron this is happening more and more to the detriment of the overall content of what he has to say – the latest example being "il y en a qui déconnent"(some of them cock up), which some media focused on as he launched the Grand Débat National in discussions with mayors, in which he was otherwise deemed to have performed well.

His full words were reportedly: “People who are in difficult circumstances, we’re going to get them to act more responsibly, because there are some who do things well and others that cock up”.

It was taken as an example of him being patronising towards the less well-off as well as not being ‘appropriate’ language for a president since déconnent is slang.

One variation of the expression is la petite phrase qui tue - a 'killer phrase'.