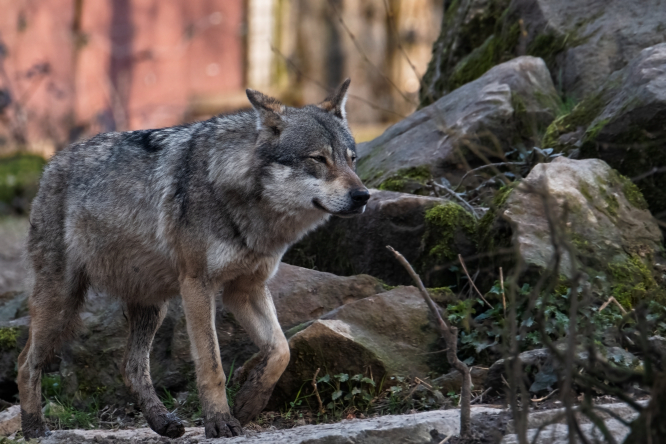 An animal spotted on numerous occasions in Calvados in Normandy on Friday (November 19) was indeed a wolf as suspected, the French Office of Biodiversity (Office français de la Biodiversité, OFB) has confirmed.

It is the first confirmed sighting of a wolf in Calvados for over a century, the prefecture revealed.

Researchers had studied the animal’s footprints and other samples to determine its species.

The animal was first spotted by a farmer on the edge of one of his fields in Sully in Calvados. He took a photograph and notified the local mayor. The gendarmerie were also informed.

The animal fled but was photographed again in Maisons, a commune 2kms northwest of Sully, by a farmer in his vehicle. It was later also seen in Sommervieu, 7kms east of Sully.

The presence of wolves has been recorded recently in other areas in Normandy and, in particular, in Eure and Seine-Maritime.

The situation of wolves in France

Wolves completely disappeared from France in the 1930s due to hunting. However, the grey wolf became a protected species after wolves re-entered the country in 1992 by travelling across from Italy where they have been protected since 1976.

They are mostly confined to the south-east, near the border with Italy, but have been populating and spreading across the country, with the first confirmed sightings as far north as Normandy confirmed last year.

You can follow the OFB’s map on the presence of wolves in France, which is updated annually, here.

Wolves are currently classed as ‘vulnerable’ on the red list of threatened species in France. However, their killing is still permitted due to the damage they can cause to farmers’ livelihoods, although limits on culls are in place to ensure the survival of the species. The limit for 2021 is 19% of the total population.

Ferus, an association for the protection of large predators in France, says 96 wolves have already been killed this year as of November 3.

Wolf culling is controversial with many environmentalists. Pascal Sourdin, a member of not-for-profit Animal Cross organisation which aims to protect and ease the suffering of animals, argues that ‘every animal has the right to live and to be protected’.

He notes that the level of protection of the wolf has been significantly reduced in France, almost to the status of a huntable species.

Mr Sourdin proposes various methods of protecting cattle which could prevent the need to cull wolves, such as improving electric fences, introducing more protection dogs, and controls of the herd protection systems by an independent authority.

What to do if you see a wolf

If you encounter a wolf, the OFB advises to stay as far away as possible, stand straight and not run. It says you should walk backwards slowly and calmly, keeping the wolf in sight and not turn your back to it. If the wolf does not back away and instead becomes aggressive, growling and lifting its tail, you should shout and throw objects at it all while continuing to distance yourself.

Caught on camera: Wolves in the snow in French mountain

Chateau an hour from Paris available to part-own for less than €60
13 January 2022
More from Nature
More from Connexion
Get news, views and information from France
Join the newsletter
Subscribe to The Connexion