Back in fashion: How to care for ferns as houseplants 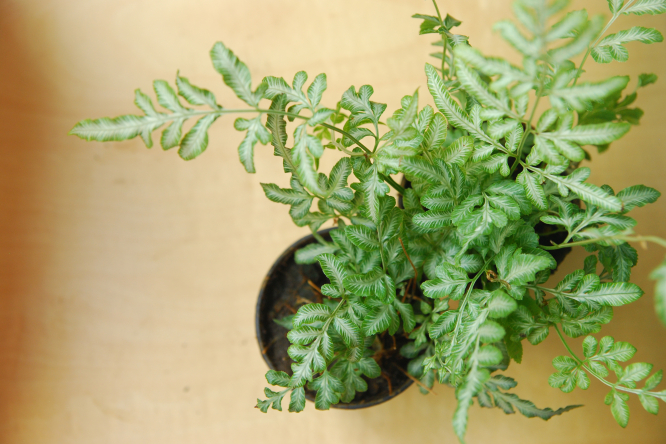 Smaller ferns, such as the huge number of varieties of 'Pteris cretica' with fancy leaves and leaf markings, are a good choice Pic: Betaplusz / Shutterstock

Indoor ferns and humans do not make the best bed mates. They like damp, we do not. That would be why they were so popular in the nineteenth century: the perfect accent for every drawing room with no central heating in a dampish house.

People – and ferns – of that era took readily to the newly fashionable terrariums, initially used to bring plants to Europe from overseas while maintaining ideal growing conditions of warmth and humidity.

The botanist Nathaniel Ward accidentally invented the terrarium in 1842 and saw his first success with a fern that germinated within his home-made prototype, which he was using to study insect behaviour.

'Growing ferns in the 21st century in your own home? If you have an old stone house without radiators I both rejoice in your good fortune (fern-wise) and pity you at the same time'

No direct light (or at least part-day only) and cool conditions with some heat in winter are a fern’s ideal milieu.

Group them together – especially if you can manage a tray of damp pebbles at their base to increase overall humidity – and spray them over lightly once a day.

Alternatively – say you or one of your young had an outgrown passion for tropical fish and you are now lumbered with an old aquarium? Turn it into a Wardian case.

Either plant the ferns in a good, very freely draining compost (try a third each of standard potting compost, shredded sphagnum moss and sand/gravel) set on a layer of gravel, or simply set your potted ferns on a pebble base.

Since the aquarium will be open at the top, meaning that less moisture is recirculated than in the original Wardian cases, try to mist the plants and pebbles over a couple of times a week.

Smaller ferns, such as the huge number of varieties of Pteris cretica with fancy leaves and leaf markings, are a good choice. Try ‘Albolineata’ for some variegation. As are the many variations on the dwarf lady fern, Adiantum microphyllum.

You might even want to start propagating them using more than the usual method of division – by sowing spores. The important thing about sowing ripe fern spores (you can tell when they are ripe because the ‘sporangia’ that hold the spores turn dark brown on the underside of the fern frond) is that they must be sown in completely sterile conditions. Try using standard plastic kitchen storage tubs – or even cut-down plastic milk bottles – as containers. Anything you can seal after sowing, to prevent contamination.

Use a peat-based compost and sterilise it before sowing by pouring boiling water filtered through kitchen towel, which you lay on top of the growing medium. Leave it to cool and remove the towel before you sow the dust-like spores.

As with any seed, try to sow as thinly as possible, otherwise you will have to thin out the resulting little sprouts or ‘prothalli’, because they don’t thrive with competition. After sowing, cover with the lid or a plastic bag.

The little sprouts that appear after your sowing are only the first stage. Keep them moist by spraying over with sterilised water. Eventually true fern plants will emerge from the prothalli (which then wither away) and at this stage you can prick them out. This whole process can take a year or more – so be patient!

There are, however, ferns that do not mind drying out a bit. My favourite is probably Phlebodium aureum, the golden polypody, with its rather un-fernlike ribbons of leaves. It grows from rhizomes covered with golden, moisture-trapping hairs, perched as an epiphyte on tree branches in the wild, all of which probably makes it more amenable to drier conditions in the home.

Although they tolerate more sunlight than many ferns, they still thrive best away from direct light and draughts. Never over-water, just keep your plant moist, and do not allow the temperature to drop below 13°C at any time. If you wish to re-pot, use a free-draining compost, such as I have described for terrarium culture above. Much nicer than the lopsided tropical plants, such as Monstera and Philodendron, that we are used to seeing in our living rooms – to me, those always look like sad old lions in a zoo.

A well-grown Phlebodium, on the other hand, with its mass of silvery grey-green fronds rising up from that furry golden rhizome, can make a truly architectural and fascinating house plant – a proud old lion. There is one cultivar to particularly look out for – ‘Blue Star’ seems to be all the rage at the moment and the name speaks to the lovely bluish tinge of the foliage.

The Connexion is hiring an experienced journalist
20 September 2021
More from Nature
More from Connexion
Get news, views and information from France
Join the newsletter
Subscribe to The Connexion