Diary of a birdwatcher in France: The capture of 33 griffon vultures 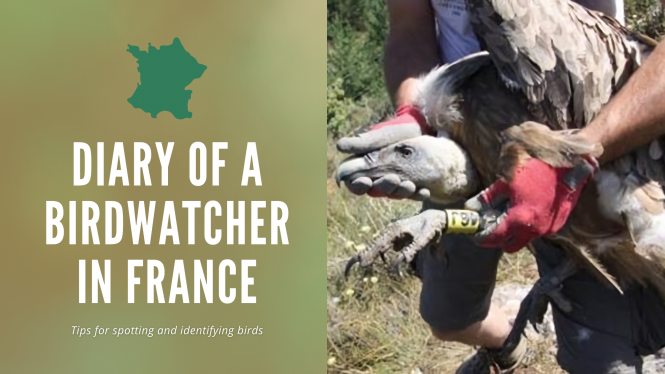 Two years ago the Aude vulture team at the Ligue pour la Protection des Oiseaux (LPO) was given permission to capture and equip ten adult griffon vultures with geolocation transmitters.

The idea being to give information as to how far they were coming from nesting or roosting sites in order to take advantage of our feeding stations. Most large birds are equipped with these sorts of devices when they are still chicks in the nest, as that is when they can

be handled more easily. But this particular study was aimed at adult birds, bringing new challenges.

A suitable cage was constructed, which could be rapidly shut when sufficient numbers of birds were inside. Only one person was in the nearby vicinity for fear of alerting the vultures and ravens that something was planned, and that person crouched in a hide ready to release the net that would fall to trap the birds.

Every week the cage was baited with suitable food, and was used regularly as it was situated near to a major roost.

In reality, it eventually took nine long, and often very hot, days before the aim was finally achieved. One afternoon the rest of us, sitting comfortably under a tree, were urgently summoned from a kilometre away and sped towards the site.

Just after, the trap was triggered with 33 griffons inside.

Our two most experienced bird handlers, suitably equipped with visors and helmets, entered the cage and selected the birds; fully mature birds who were liable to be nesting and raising chicks. Temporarily, they were put into large dog crates

Three other birds were kept as spares and the rest released to fly off as quickly as possible, no worse for the experience, except for some stress.

Griffons are impressively large birds, with a highly flexible neck that can turn and do damage if not properly restrained. As can be seen in the photo below, the beak is powerful and sharp, as vultures do not kill their prey but just need to tear into the body of dead animals, and so this needs to be constrained.

In other raptors such as eagles, it is the talons to be wary of, as their powerful grip has evolved to grasp and kill prey species by pressure and sharpness of the claws. There were, despite precautions, a couple of painful pecks, but no real harm was done to handlers or, above all, the birds.

One by one, the birds were taken and fitted with a harness holding a small transmitter that would enable the geographical position to be traced on an international data base called Movebank. This is an interesting site with much detail of very many animal species' movements.

Take a look on the internet, many species of bird and other animals can be followed as they go about their daily lives.

You can see the Movebank website at this link.

Below is a picture of the transmitter, with its small solar panel, being fitted to the back of a bird. These, for griffons, do not need to be tiny, weighing a fraction of the bird itself, and the harness has been so designed to not restrict movement in any way. Nano technology has enabled some of the smallest birds, weighing just a few grams themselves, to be fitted with such devices with no hindrance to the host.

Each bird was also fitted with identification rings, one large plastic one with numbers able to be seen on photographs or with a telescope, and another metal 'museum' ring which may be recovered from the corpse of a bird when it eventually dies.

One of the birds had already been ringed with a yellow, Spanish ring, so we were able to trace it later by contacting Spanish colleagues.

They were each weighed, biometrics taken, that is the length of wings, of the head and beak, and a DNA sample was collected by plucking a small feather, which indicates the sex of the bird. Then, they were all released to the skies once more.

As you can guess, we were a very happy vulture team that evening. After so many days when it had been hard to work out what was spooking the birds so there was never an opportunity to capture enough, success at last.

The data is interesting, some showing that birds were coming substantial distances to

take advantage of the Aude sites - one from near Pamplona (Spain), which appears to

be its nesting site. Why this is so when they could clearly find adequate food sources nearer to home is one question to be studied. Spain, after all, being the stronghold for European vulture populations.

Also, and this is very encouraging for us, there is exchange with the Alps. Although griffons

are no longer rare in Aude, other species such as bearded vultures are, and Aude was chosen to a be the most eastern end of the Pyrenees in order to create a corridor towards the re-introduced birds in the Grands Causses regional natural park and the Alps, so any breeding has a better chance for a healthy exchange of genes.

It is ironic that this sort of study has only become possible because of technological advances in the last 30 years or so, and at a time when so many bird and animal species are under threat of extinction from human activity and, above all, climate change.

It has become a race to collect information that was previously a mystery; for instance where migrating birds go and where they need to stop on route - known as staging posts -

to feed and replace fat reserves so that they can continue on their way, and in Spring time especially, arrive in good condition so that breeding can be successful.

This information can lead to precise targeted habitat protection, an important use of limited resources. Researchers are doing this sort of work all over the world, and adding very rapidly to the knowledge that we humans have about the other marvellous species that we share the planet with.

I feel very privileged to be able to play a small part.

Truffle season starts in France with quantity down but quality up
1 December 2021
More from Nature
More from Connexion
Get news, views and information from France
Join the newsletter
Subscribe to The Connexion