Diary of a birdwatcher in France: The common buzzard 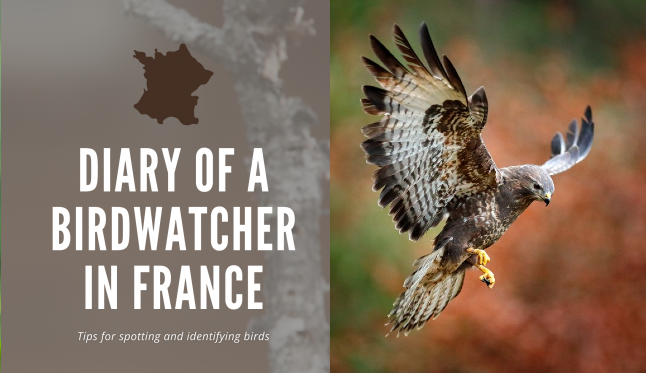 There are between 120,000 to 160,000 common buzzard couples in France, making it the most common raptor in the country Pic: The Connexion / Ondrej Prosicky - Shutterstock

Driving back from our nearby town at midday I caught a glimpse of a fluttering wing on the verge.  I walked back, and there was a common buzzard (buse variable) gaping at me from the ditch.

At this point it was easy to pick up, as it was stunned and in shock. I wrapped it in a spare t-shirt and stuck it under a seat in the car and drove home. I had glimpsed a touch of blood on its head, so fully expected it to die from an internal head injury. Rescuing injured birds is a forlorn task, as very few make it back to health and into the air to fly free again.

I put it in a cat box covered with a towel for darkness. I had a short time to wait before the local vets opened where I wanted to take it for a quick check for major damage. I was a little surprised that it seemed very alive when I took the towel off the cage; I had already phoned the vet and arranged to drop by straight away.

Most vets will take a look at an injured wild animal without charge, but they are often not experienced with handling a terrified large bird and can only give a rudimentary examination. I took a pair of work gloves and also a sock to slip over its head during the examination of the rest of the body.

The very young vet asked me if I had any experience in handling birds; I have had some so agreed to reach in to take it from the box. Ideally you handle them from behind, firmly holding the wings to the body, but it had wriggled round and was facing out, its mouth open which is always a sign of stress.

My box only opened at one end, so there was no choice but to slide a hand in above and from the front. It was then that I found out that my gloves were too thin. The now agile bird managed to flip onto its side and strike with one of its talons.

Until you have felt the strength in the foot of a raptor you would never believe how much power can be concentrated in such a fine, stick-like limb. Their feet are scaly yellow coloured with curved black talons on each toe, four in all with fourth opposing the others like our own thumbs.

Turn your hands into a claw shape, like a child playing at being a fierce tiger, and exert all the force you can through the fingers, feeling the muscles contract far up the arm. This is what raptors grip their prey with and kill with crushing, penetrating daggers.

All four were now firmly embedded through the glove and in the fleshy part of my thumb, and having experienced this before, admittedly on a much smaller kestrel, I know that you just have to wait as the force will slowly ease away. The vet was able to examine the wings, head and belly and I struggled not to curse with the pain. The small amount of blood coming from the bird's ear had already stopped and was drying off.

I had to ask the vet to try and free my hand, which is difficult to do as it tends to grip harder at any attempt to loosen the grip. It was only after a while when we could pry out the back talon that it suddenly relaxed and let go enough for me to slide it back into the box, with some relief.

It had shown enough life and strength, there was no other obvious damage, so I decided to drive off to a wide open plateau nearby to release it and see if it could fly. If it just fluttered a few metres it should be possible to capture it again. Stopping to buy a pair of much thicker leather gloves on the way, in ten minutes the bird and I, with a disinfected but slightly bleeding hand with two neat triangular holes, were able to walk to an open space.

I would have preferred to have someone with me to help with the recapture if necessary, to draw the birds attention while I approached from behind with a towel, but it is also important to do things as quickly as possible to minimise stress, and I have no immediate neighbours with experience.

Needless to say, the bird was now in the ideal position and facing towards the rear of the box, so despite its reluctance to leave I was able to pull it out backwards with no further damage to it or myself, and was delighted to see it leap into the air and fly away for at least a couple of hundred metres without any obvious handicap, before landing near the hedge at the far end of the field.

Will it survive? There is a good chance, it was a strong and well-fed bird with good fat reserves on its breast so, having rested and recovered from the trauma of being handled, I can cross my fingers... but not, today, one slightly aching thumb.

The word raptor comes from ‘rapere’, meaning to seize, as in ravisher, abductor.

A frightened raptor is a force to be reckoned with, and falconers always use a thick leather glove. These are birds that live on the edge, obliged to kill to eat, and can easily starve if conditions are against hunting. Even a buzzard, who is not above stomping about in a field searching for worms and insects if there is no other prey available, is a formidable animal.

I will go tomorrow and take a look, and hope not to find any sign of it. It must be at least 20 kilometres from its home territory, but at this time of year that is not so important and it could well be a young bird quite capable of roaming long distances, and maybe will have learnt that roads are dangerous places.

More than 200,000 trees being planted for future forest outside Paris

Chateau an hour from Paris available to part-own for less than €60
13 January 2022
More from Nature
More from Connexion
Get news, views and information from France
Join the newsletter
Subscribe to The Connexion