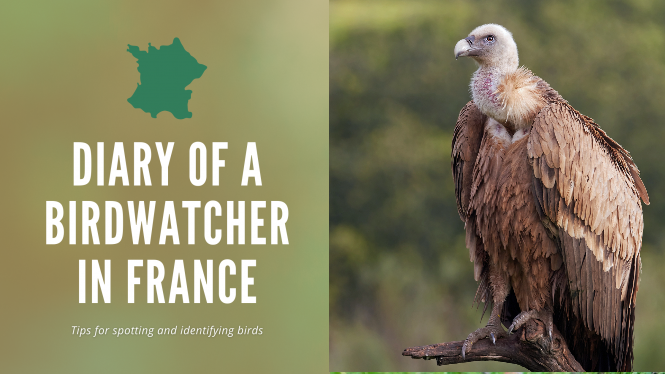 The most common vulture in France is the griffon vulture - 98% of the time it will be this that you see Pic: Dennis Jacobsen / Shutterstock

As I started out a couple of days ago to go and check on the progress of an Egyptian vulture (vautour percnoptère) nesting site, just five minutes up the road, I came across a massive fly over of maybe 100 griffon vultures (vautour fauve), circling and drifting with very little effort in the bright sun of late afternoon.

If you live or visit the mountainous or hilly half of southern France, looking skywards you will have noticed these enormous birds, often in groups or training across the sky following one another.

Outside of migration periods, they are the only raptor that will be seen in large numbers together.

There are four Old World vulture species in Europe; the other two are the black vulture (vautour moine) and bearded vulture (gypaète barbu).

The history of vulture re-colonisation in France is a success story.

The stronghold of vultures in Europe is Spain, where the population thrived as a result of the intensive pig rearing, which led to many carcasses being thrown on muladares dumps.

Diseases and then BSE ‘Mad cow disease’ in 2002 led to stricter legislation on disposal.

For some years the vulture populations suffered dramatic losses due to food shortage, until legislation came into force allowing a controlled disposal. Feeding stations were set up on farmers’ land so that they could dispose of carcasses easily and without charge.

They were seen back in France after being persecuted to extinction throughout the 20th century. At first there was distrust amongst the farming/hunting community, who believed that they would prey on livestock, and rumours to this effect circulated.

In reality, a vulture will not usually attack a healthy living prey, they are simply not equipped with strong beaks and talons capable of inflicting damage, unlike a golden eagle.

Only in 3% of cases is the animal targeted not completely dead before the vultures gather to scavenge.

Through an awareness programme spearheaded by the Ligue pour la Protection des Oiseaux, their presence is totally accepted here in the Aude. In some of other French departments, there remains work to do.

The most common vulture in France is the griffon vulture - 98% of the time it will be this that you see.

They have wing spans of up to 2.65 metres, and they are most easily recognised by their short tails, brown and black wings – and the very ergonomic flight style; gliding and only flapping their wings when they have to.

They nest and feed, in groups. The photo below shows that occasionally the feeding can be a frenzied affair, with up to 150 birds present. Even though it looks like a chaotic rugby scrum, no-one gets hurt. There is just a lot of bluster and jockeying for position and the chance to feed.

A lot of the time you might see individual birds gliding high in the sky, actually moving from one hot-air thermal to the next. If one bird spots a carcass it will circle and begin to descend to inspect, and other birds will be drawn in from far away, like the drawstring of a net. In a matter of a few minutes, large numbers will appear as if from nowhere.

In the picture below you can see a black vulture, which is slightly larger than the griffons and also much rarer.

The LPO is in the process of setting up an exciting project in the Aude with the aim of simulating nesting of wild birds by relocating a sterile couple from a zoo into a very large aviary; they will go through the motions of building a nest, laying an egg and attempting to hatch it; watched by wild birds the hope is that in time they too will be attracted into nesting nearby. This method has been successful in the past.

The Egyptian vulture is the smallest of the four.

It’s wingspan is 155 – 170 cm, and is easily recognised by the white and black pattern of the wings, yellow beak and wedge-shaped tail.

It is, unlike the others, a migrant, and is here from March to September, before heading off to West Africa for the winter. This year promises to be the most productive achieved in recent history, with the possibility of six successful nests in the Aude. Each nest will contain one egg or newly hatched chick; rarely, twins are raised to fledging.

Finally, the most beautiful and extraordinary; the bearded vulture. This is the famed “bone-breaker”, known for their ability to gather the bones of a dead animal and, after breaking them into pieces, to swallow and absorb not only the marrow within but the bones themselves.

Having located a suitable scree slope, they will drop the bones from height and spiral down to pick up the pieces. It is said that enzymes in their stomachs are acidic enough to etch glass.

The orange colouring on the neck and legs is in fact cosmetic, obtained by bathing in ferrous-oxide pools. This is perhaps done as a treatment against bacteria, perhaps just for show.

Normally, the females are more brightly coloured than the males. Bearded vultures are the same size as the griffons, but they have a much more elegant flight, longer wings, a wedge-tail and startling red eye-ring when seen close-up.

Evolution has worked that these four species of vultures work together to dispose of a potential pollution hazard, each consuming slightly different parts of carcasses.

The powerful black vulture will open through the skin, the griffons eat mostly soft tissue, the Egyptian will clean smaller scraps and the bearded vulture will tackle the skeleton. We are lucky to have them.

Griffon vultures no longer in danger of extinction in France