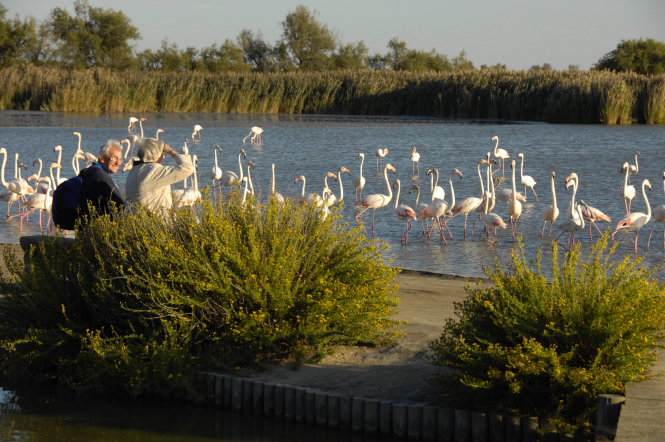 Flamingos in the Camargue are experiencing a “baby boom” year. Some areas are seeing 10 times as many birds as usual – due to the lack of human activity during lockdown and good conservation work. The most spectacular rise has been in the salt pans, which have become a favoured breeding place for the birds over the past six years.

Florence Saki, of the area’s management company Groupe Salins, said: “We have counted 12,000, against 1,200 in normal years.” Breeding sites like those at the Parc Ornithologique Pont de Gau, near Saintes-Maries-de-la-Mer, and the salt pans managed by Groupe Salins at Aigues-Mortes have also recorded significant increases in baby flamingos.

The birds usually mate for life and have one baby a year. During the 1970s, numbers fell so much that, in some years, birdwatchers spotted no breeding couples in the Camargue. Pont de Gau director Frédéric Lamouroux said the 60-hectare park closed on March 15 and over the following weeks staff saw the number of flamingos arriving grow from the usual 1,500 to 2,500.

“This year, with the lockdown, there were fewer planes and helicopters flying over the salt pans, which might have made a difference but, above all, it is the efforts made by our salt workers who have embraced wholeheartedly the work done to improve the environment for flamingos.”

Since 2014, Groupe Salins, which makes La Baleine table salt, created islands in old salt pans and worked to manage the water levels in them to provide ideal breeding conditions. “They were out all winter making islands and regulating the water levels,” said Ms Saki. “Each year since 2014, when we decided to make an effort to create an environment suitable for flamingos, we have had breeding birds, and bird watchers have seen birds from other sites seem to be evaluating the site to see if it is suitable. This year all the new islands in the pans were occupied and then, of course, the quiet of the lockdown period might have helped.” The company also worked to remove predators such as foxes and boars from the salt pans, which are not open to the public.

Reasons behind the baby-boom

Patrick Grillas, president of the scientific committee of the Ligue pour la Protection des Oiseaux (LPO), told Connexion there were three main reasons for this year’s spectacular rise in the number of flamingo chicks. First, lockdown meant aeroplanes, microlights and helicopters, which often fly over the Camargue delta to take photographs, did not do so this spring. “Flamingos are sensitive to disturbance, and if a flock takes fright from a low-flying aircraft and leave their nests, they often do not return,” he said. “This year there was less disturbance and more chicks survived.”

The second factor was the work done by bird parks, notably the salt workers of Groupe Salins. “Not only have they been making islands and carefully monitoring the water, but they have been very diligent in keeping people out of what is still a working salt-making facility. They have also been keeping the numbers of predators down.”

The third factor, according to Prof Grillas, has been the lack of dramatic climate events, such as storms and floods, and a humid spring which boosted their food sources. “It has been a very good year for flamingos, but we cannot say if next year will be too,” he said. Other birds which benefited initially during the lockdown were small birds nesting along Atlantic coast beaches, whose nests and eggs are often crushed by walkers or eaten by dogs.

Prof Grillas said lockdown ended too soon for birds to fully benefit. “There were more chicks than normal, but when lockdown ended, they were still too small to fly. As soon as people started walking with their dogs on the beach, they disappeared. We must make people more aware of them,” he said. LPO chief executive Yves Vérilhac warned people to be sceptical about stories of nature rebounding during lockdown. “I know that people are desperate for good news in these troubled times but we are not all children needing comforting stories,” he said.

“Three months of lockdown is not going to change the decline in biodiversity. Only a sustained effort by all of us will make a difference.” He said intensive agriculture had been identified by many scientists as the main factor reducing biodiversity in Europe and across the world. He urged people to join the LPO or other lobby groups working for greater recognition of the need for biodiversity in agricultural policy.

*For readers unfamiliar with the term, a carnet rose is the section of a French newspaper which lists the new births.