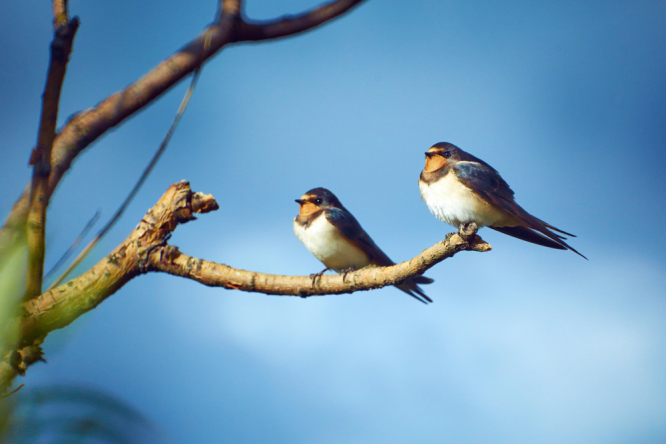 Swallow populations are also falling by an estimated 500,000 each year in Spain Pic: Tedgun / Shutterstock

Swallow populations in France have fallen an estimated 40% in the last 20 years as fewer birds return to France each spring.

Swallows typically migrate 10,000 kilometres from Africa to Europe in spring, and back again in autumn.

Pierre Maigre, from la Ligue de protection des oiseaux (LPO) in Occitanie said falling swallow numbers were part of “a general decrease of numerous birds in towns and in the countryside” in France.

“The pink-breasted shrike disappeared in Hérault and so in France in 2019, and the wheatear disappeared in the Pyrénées-Orientales… it’s a sign of the poor state of biodiversity in Europe and Africa,” he told La Dépèche.

The problem is not confined to France alone - the Spanish society for ornithology estimates that the number of swallows returning there falls by 500,000 each year.

Intensive agriculture which has reduced hedgerows and increased use of pesticides plays a role.

A German study found that, in Europe 75% of flying insects have disappeared due to pesticide use in the past 30 years.

Mr Maigre said: “For swallows there is a real lack of food.”

Additional factors include humans, who often destroy swallow nests on their houses or in garages, and climate change causing increasingly dry winters.

“Swallows find it harder and harder to find mud to make their nests when they arrive.

“[Consequently] migratory species arrive earlier and earlier, but then they are hungry because the insects they feed on are not yet available,” Mr Maigre said.

But, there is some good news for bird enthusiasts in France – preliminary figures from a national study show encouraging signs that stork populations are recovering.

In Alsace, “1,200 nests are occupied” each containing up to five young birds.

In 1974, only nine nests were present in Haut-Rhin and Bas-Rhin, and the birds had all but disappeared in France.

Since then, populations are thought to have recovered due to the increased presence of American crayfish, an invasive species which storks feed on.

President of the LPO in Alsace, Yves Muller said: “We have saved storks in Alsace. Now we will leave the population to evolve naturally.”

Storks remain a protected species in France, and interest in them is high.

In the commune of Sarralbe in Moselle bird enthusiasts have been able to observe the local storks and their offspring for some years, thanks to a live stream of a stork nest in the town centre.

Now, four of the young birds have been fitted with GPS trackers so that their journeys can be tracked for research purposes.

Ornithologist Dominique Klein told Lorraine Actu the project has been in the works for three-years.

She said it would enable students in schools to “see exactly where the young storks go in real time. It’s unique and exceptional".

“Where will they go – Lyon, Narbonne, Barcelona or North Africa? It’ll be really interesting to find out.”

The trackers weigh 20 grams and will not harm the birds or make it awkward for them to fly – although a fifth young bird was not fitted with a tracker as he was judged to be too small.

Vibrating vests let hearing-impaired feel music at concerts in France
21 July 2021
More from Nature
More from Connexion
Get news, views and information from France
Join the newsletter
Subscribe to The Connexion