Gardening in France: Autumn is the time to buy your bulbs 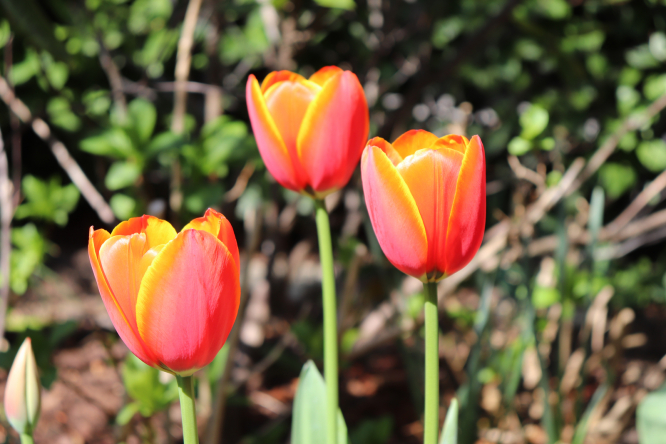 Save planting your tulips until November, says Cathy Thompson, because planting into cold soils is one way to limit the spread of the dastardly tulip fungus, ‘tulip fire’ (Botrytis tulipae) Pic: EBASCOL / Shutterstock

My version of online shopping does not include browsing for World War One memorabilia or Jimmy Choo shoes. Instead, during late August and September, I cruise for delicacies like Ranunculus acris ‘Citrinus’ and – almost feverishly – bulbs.

All bulbs need three things: decent drainage, water in the growing season and a dry rest period. Tulips absolutely demand the last element, since they come from the summer-dry conditions around Turkey and Iran, through to the Russian steppes. At the moment I am fearfully aware that the torrents of rain we have received in north-eastern France over summer 2020 will not have done them any favours and I really need to bulk up my numbers.

What I will not be buying now is snowdrops. I leave them to the ‘correct’ planting season – just after flowering in late February/early March when the bulbs are still in growth – ‘in the green’. Occasionally you’ll find tough snowdrops that spring back into health over a two to three year period after being subjected to complete drying out, but they are the exception to the rule and you should not gamble on it (especially not given the price of snowdrop bulbs!).

Although I will shop now for the large-flowered cultivars of tulip, I will not be planting them until November, because planting into cold soils is one way to limit the spread of the dastardly tulip fungus, ‘tulip fire’ (Botrytis tulipae). But species tulips to plant into borders and long grass are high on my shopping list for planting in September – not least because they are reliably perennial and actually seed themselves about. The smallest – such as the warm-toned Lady tulip (T. clusiana), yellow T. tarda and the bronzey touches of T.batalinii cultivars – are probably best kept for borders and rock gardens.

But if you are into meadow gardening (and who isn’t these days?) choose taller sorts. My favourites are yellow T. sylvestris, paired with the reds of T. praestans, T. whittallii and T.sprengeri. The best conditions for a flowery meadow – which can include tulips as well as other bulbs – is on quite nutrient-poor ground with a lowish proportion of grass to flowers. That means that you never feed these areas and normally would rake the clippings away after the first cut you make in summer.

If you have strongly growing grasses, try defeating their vigour a little by adding annual yellow rattle (Rhinanthus minor). Sometimes known as ‘nature’s lawnmower’, it is a ‘hemi-parasite’ that can suppress grass growth by as much as 60%. Yellow rattle seed needs to be very fresh (with a viability of only about one year), so buy from a specialist seed supplier or, even better, harvest seed from a neighbour’s meadow when it’s ripe in August. It’s polite to ask!

To prepare the ground for both bulbs and yellow rattle, cut the area to within an inch of its life. If you want to sow yellow rattle, ‘scarify’ the area by raking away all the thatch at soil level, since you would ideally end up with about 50% of the soil bare, so that the seed will have direct contact with the soil and germination will not be inhibited.

First dib in your bulbs at a depth of about two to three times the height of the bulb. You do not need a fancy bulb planter – a mattock will do and can be faster for planting in bulk. After the bulbs, sow your yellow rattle seed and wait for spring germination.

Keep the area mown through to November, unless you are growing autumn flowering crocus and colchicums. The following year – but only if you are not growing yellow rattle – wait until six weeks (ideally eight weeks) after the last bulb foliage has died down and then cut the area back to about 10cms. This is usually about mid-June, but could be later if you have also planted colchicum (‘naked lady’) corms, since their foliage takes until July to die back properly.

Unfortunately, if you have decided to give it a go with yellow rattle, you will have to wait until August to allow them to properly seed themselves since they are annuals. You might take advantage of this limited mowing season and plant colchicums as well, since the growing/ mowing cycle is a heaven-made match.

It is a good plan to leave the clippings after your first cut to lie on the soil surface for a few days, allowing the bulb seeds time to drop back onto the soil. But make sure that you do rake it off, as you do not want the hay to enrich the soil.

Alternatively, if you want to have a little more control over the seeding of the bulbs, try harvesting the seed-bearing stems individually and standing them in jars of water in a warm shed until they start to split. You can then sow the seed onto your newly clipped meadow or – for more control – sow into pots or trays of very gritty compost.

You could add many other bulbs, for instance, Gladiolus byzantinus, Eremurus (‘foxtail lilies’), Lilium martagon and the daintier species of narcissus, such as N. poeticus and N pseudonarcissus.

On meadows situated on heavy or damper soils, you could also use Camassia quamash, Camassia leichtlinii ‘Caerulea’, Fritillaria meleagris (‘snakeshead’ fritillary), adding Erythronium species if there’s a little light shade. F. meleagris, although normally planted as dry corms in September, can be quite hard to establish and it is worth planting your recent acquisitions five corms to a 9cm pot, leaving them to overwinter in the open before planting the clumps out in spring. They will be much more vigorous.

If you really want to get the most out of your bulbs, do a little background reading about where they come from in the world and then dare to mimic the harsh conditions they enjoy in nature.

Normally there is no shortage of baking summer heat in most of France!

Did you know: First woman to sail around the globe was French
14 October 2021
More from Nature
More from Connexion
Get news, views and information from France
Join the newsletter
Subscribe to The Connexion