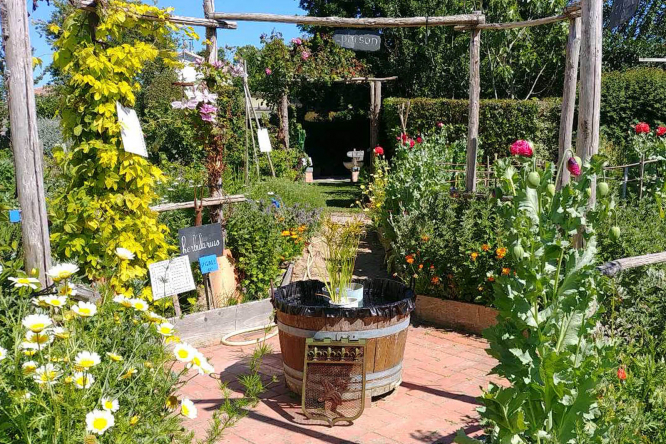 There is a medieval style garden to visit at Pornic, Loire- Atlantique in August for Open Gardens/Jardins Ouverts, the association which encourages gardeners of all nationalities to open up their gardens, big and small, to the public, to raise funds for charity.

Brigitte Bachelier, a retired primary school teacher, became fascinated by medieval history when she studied all aspects of it for a two-year project with her pupils, and applied her new interest to her garden.

It is divided into twelve areas including an orchard, a cloister garden and Mary’s garden, which in Medieval times was dedicated to ornamental plants. She says the only way to understand a garden from this period is to be aware that everything had a religious significance.

Her vegetable plot, or hortus to use the medieval term has four sections; herbs, many of them medicinal; plants used to dye textiles; grains and vegetables.

Her planting has been inspired by Charlemagne’s Capitulare de Villis, written in the 8th century to give guidelines for the way a royal estate should be laid out. It includes a list of nearly 100 plants, many of them with medicinal use.

Mrs Bachelier says it is impossible to grow exactly the same varieties as existed that long ago but ones, like hers, can draw inspiration from what is known about gardens at that time.

She likes to tell the stories behind the plants: “The fleur-de-lys, translated as the lily flower has long been used as a symbol of royalty, but it is more likely the original flower was the yellow iris, iris des marais. In the 12th century, Louis VII adopted its use and so fleur-de-lys may actually mean Louis’ flower rather than lily.”

One of her favourites is Salvia sclarea, which can grow to a metre in height, with long pale pink or mauve pink flowers and strongly scented, oblong leaves. Like many sages, it would have been used for medicinal purposes.

Another is Verbascum Thapsus, the great mullein in English. It has long leaves growing in a rosette which can reach up to 50cm. It produces a single stem usually 1-2metres tall with a spike bearing numerous yellow flowers. The dried leaves or stems could be dipped in wax and used as a candle, hence its common French name, Cierge de Notre Dame. It too was used for medicinal properties, Mrs Bachelier says, some of which her visitors rarely forget: “It was a treatment for haemorrhoids and also in a very practical way as early toilet paper.”

She spends as much time in her garden as possible and has created it singlehandedly apart from occasional help with heavy pruning.

“I try to garden as naturally as possible, using my own compost. I am lucky to have a good soil and a favourable climate living near to the sea. Even so there are good years and bad.” In August there will be roses, dahlia, chrysanthemums and flowering shrubs in bloom.

She has opened her garden to visitors since 2011, with appointments through the local Tourist Office. This is her first year for Open Gardens.

Sue and John Sargeant’s garden at Pontcirq in the Lot will be open every Wednesday and Saturday up until October for Open Gardens.

There is a woodland garden, gravel area for dry loving species, formal grassed areas with trees and shrubs, wild flowers, a vegetable plot and a wide variety of plants: “A bit of everything,” says Sue Sargeant.

When the couple retired to France in 2006, she says this was her first ever chance to fulfil a childhood wish to create her dream garden. “It was pretty much a blank canvas other than numerous oak, elm, walnut and fruit trees.”

She soon realized the summer months were much dryer than in the UK, and they had to contend with hardly any depth of soil, as the house was built on the bed rock: “We had to move mountains of stone, soil, compost and manure over the years and we lost count of the number of wheelbarrows we have had to buy.

“We produce compost in big bins which takes a year to mature and we mix that with four tonnes of cow manure from our local mayor. We now have a decent soil, but have to keep working at it. We have also created a gravel garden, which needs less soil and which suits drought tolerant plants.”

She says her passion for plants has grown with her garden. She has two greenhouses and grows many of her own flowers from her harvested seeds and she propagates trees and shrubs from cuttings: “I joined a Gardening Association to give me an insight into what grows in France plus opportunities to visit gardens for inspiration. I enjoy swapping plants with friends because once these new plants are established in your garden your ‘friends’ are always with you.”

She has planned her garden so there is interest all year round, sowing new seed months in advance to plant out later in the year. In August, plants in flower include lagerstroemia, oleander, some of her 50 different variety of rose, day lilies and hot lips salvia in unusual pale blues and pinks.

The garden is open by appointment only by email at sargeant.sue46@gmail.com.

She will take groups of around six people at a time. Tours will take around a couple of hours, followed by tea and cake. She also sells plants she has propagated herself in aid of Open Gardens.