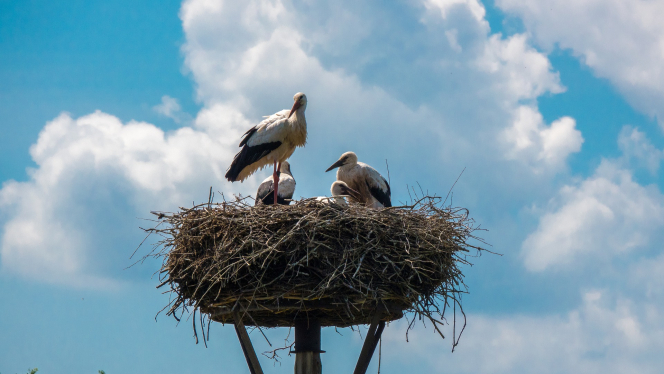 Storks quite often build their nests atop electricity pylons in the west of France Pic: Steffen Wachsmuth / Pixabay

White storks had all but disappeared from France 50 years ago but today their numbers are increasing, particularly in the west of the country in departments such as Charente-Maritime.

In 1974, there were only 11 stork couples left in France, nine of them in Alsace in the east of the country.

Today, Charente-Maritime has the greatest population of these large migrating birds, with around 636 couples and over 900 babies seen in 2020.

Alsace used to have the most white storks, but today it is the area with the second-largest concentration in France.

Their numbers have swelled in the west of the country as they are able to find an abundance of American crayfish to eat in the various bogs in the area.

These American crayfish are an invasive species that has done great damage to the native crayfish. They live in the marshes in the west of the country, which is an ideal breeding ground for storks.

The climate is also quite mild, so much so that more than a hundred storks now spend the winter in west France.

White storks are migrating birds and will usually spend six months living in France before setting off for warmer climates for the other half of the year.

They are protected in France, and it is illegal to kill them.

There are now so many coming to the west of France that they have started to set up nests in other areas, such as the Marais Poitevin marshland, which stretches across three departments: Vendée, Deux-Sèvres and Charente-Maritime.

White storks have been known to build their nests near urban areas, on trees or rooftops.

WATCH: live footage of family of storks living on a mairie in Moselle

However, more frequently now they are choosing to set up home in the western marshlands, using trees or electricity pylons to build their nests on.

And their nests can be enormous. The average weight is around 400kg. The heaviest one discovered in France was in Alsace and weighed over one tonne.

The birds have a wingspan of over two metres. Mates stay together for life and can have several babies at a time.