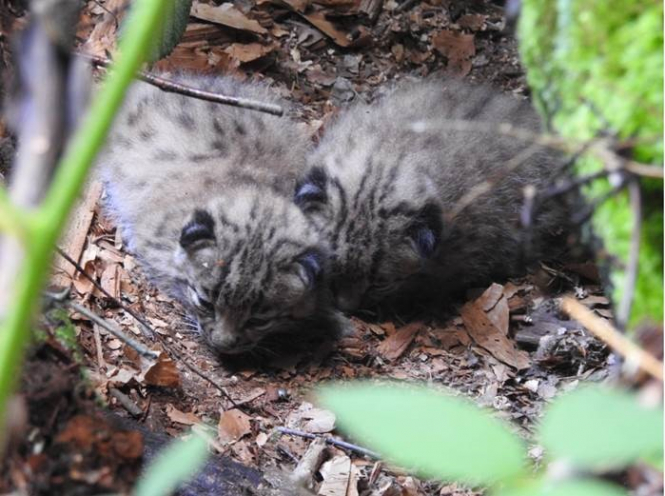 Two Eurasian lynx kittens have been born in the Northern Vosges Regional Natural Park – the first such births since the seventeenth century.

The pair are the first known litter to have been born in this northeastern corner of France since progressive habitat destruction and human persecution saw the species disappear from the area several centuries ago.

The kittens belong to a 10-year-old lynx named Lycka, which was born in Switzerland and released into the neighbouring German Palatinate mountain range with another female, Tarda, on March 20, 2020 as part of a lynx reintroduction programme.

Tracked with the help of a GPS collar, Lycka was found to have arrived in France within weeks of release.

In June of this year, its movements grew confined to a more restricted area, alerting the Office français de la biodiversité (OFB), a state wildlife protection body, to the possibility that it may have given birth.

Speaking to The Connexion today, the OFB’s Emma Vega said that these suspicions were confirmed at the end of June, when the kittens were discovered.

Since then, the OFB has continued to observe the kittens from a distance, being careful not to approach or touch them to ensure that they remain in a truly wild environment.

Ms Vega added that, so as to protect the lynxes both from hunters and from unwelcome contact with wildlife enthusiasts, the location of the litter remains a secret.

The Eurasian lynx is a medium-sized, nocturnal or crepuscular (ie. active in the twilight) wild cat with a reddish brown coat and distinctive, pointed ears.

It is the largest of the four lynx species, and when fully grown can reach a height of 60-75cm – around the size of a German Shepherd dog.

Although they will defend themselves if cornered, lynxes usually avoid humans.

The Eurasian lynx is the only such wild cat present in France, with two thirds of its population of approximately 150 living in the Jura Mountains.

In the Northern Vosges Regional Natural Park, which is bordered to the north by the Palatinate Forest, there are 10 lynxes known to the OFB, of which Lycka is the only female.

The species has an uncertain future in the region, and is on the Alsatian red list of endangered species.

The birth of Lycka’s kittens marks a milestone in a conservation programme launched in January 2015 with the aim of establishing a sustainable lynx population in the Franco-German Palatinate Forest-North Vosges Biosphere Reserve.

The initiative has been delivered jointly by both the German and French branches of the World Wildlife Fund, as well as the Rhineland-Palatinate forestry commission.

Half of the project’s €2.75million budget has been provided by LIFE, which is the EU body responsible for the environment and climate action.

The project has so far proved to be a success, with 20 lynxes from Switzerland and Slovakia being captured and released into the Palatinate Forest.

Read more: Snakes in France: What kinds are there and where will you see them?