WATCH: live footage of family of storks living on a mairie in Moselle 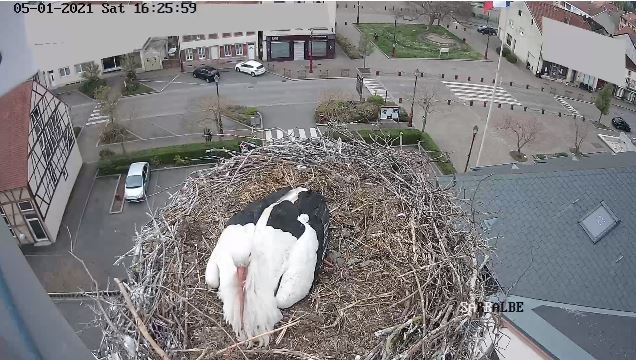 Stork-vision. A camera records every moment in the life of a family of storks that has built its nest on the roof of a mairie in the department of Moselle Pic: Screenshot / Sarralbe mairie webcam

The mairie of Sarralbe (Moselle) is showing a livestream of a family of storks that has made its nest on the building. Five new babies recently hatched.

You can watch the livestream on the Sarralbe marie's website here.

The mairie in Sarralbe first set up the webcam in 2017 to observe the white storks.

Dominique Klein, who lives in a village close to Sarralbe, has been dubbed Mr Cigogne (Mr Stork) due to his enthusiasm and interest in the birds.

Every day he posts information and updates about the family of storks on his Facebook page.

He said the current family of storks living in the nest on the mairie has probably been there the past four or five years.

White storks are migrating birds and will spend six months living in France before setting off for warmer climates for the other half of the year.

They are protected in France and it is illegal to kill them.

Mr Klein Told The Connexion that he believes there are around 2,500 to 2,800 white stork couples in France. He said there are about 37 couples living in Sarralbe alone.

He has recently given a name to the first of the five baby storks to hatch. It was born on April 23, the day that French astronaut Thomas Pesquet blasted off for a six-month mission as commander of the International Space Station.

“As one Thomas set off for the stars, another arrived on Earth, That is why I named him Thomas,” Mr Klein said.

Thomas Pesquet: From training in Moscow to lift off in Florida

The other four babies do not yet have names but Radio France and other local media outlets are holding competitions to find names for them.

The two stork parents are named Maurice and Mélodie.

“A couple of weeks ago I was doing an interview with a local radio station, called Radio Mélodie. The journalist was asking me questions about the storks and I saw on his microphone that it was written “Mélodie” and I thought that sounded all right,” Mr Klein said.

He said that storks like to live close to urban areas.

“They like to live somewhere with big trees and if they do not find a tree then they can build their nests on chimneys or on houses.

“They usually live in areas that are humid. They like marshlands. That’s where they find food.

“They eat insects, a lot of worms, small mammals and rodents.”

He said the babies will stay in their family nest for around 60 to 70 days. After that they will be able to fly away.

“When they are born they weigh around 80 grams. When they are ready to fly in around two months they will weigh somewhere between 3-3.5kg.

“Storks are carnivores; they only eat meat.

“I have spoken to farmers who complain that the storks are eating their grains but it is not possible. On the contrary, they are allies for farmers because they will eat little mice or other animals that could eat the crops.

He said that in his opinion everyone likes storks.

“They come for six months of the year. They arrive at the end of winter. They come, they raise their babies and then they head off.

“They are big birds with nice white feathers, a red beak and black wings.

“What is great is that there are a lot in Europe, in the north of Europe, in Scandinavia and a lot in the Middle East. It connects these places.

“They are protected in Muslim countries and in Christian countries.

“They are loyal, they remain in their couples. They are symbols of love, of babies.

He said his interest in storks began around 15 years ago and he feels it is his calling in life to look out for them.

“I am an advocate for storks. More often people are saying nonsense about them. I am trying to establish the truth. I want to advise people and to educate them about storks.”

Sarralbe is not the only place with a stork webcam. The Parc naturel régional de Brière has its own version of stork-reality, which you can watch at this link.