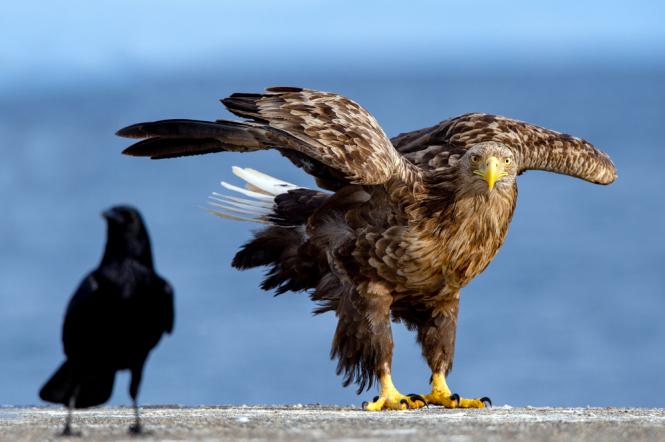 A white-tailed eagle standing next to a raven Pic: Sergey Uryadnikov / Shutterstock

Plans are underway to reintroduce white-tailed eagles to France, almost 130 years after the species disappeared from the country due to human intervention.

The first breeding pair has now arrived at a wildlife park in Sciez by Lake Léman (Lake Geneva) in Haute-Savoie. The last of the wild eagles here died in nearby Thonon-les-Bains back in 1892.

Plans to reintroduce the birds to the area began some 15 years ago, when the first applications for permission were made by falconer Jacques-Olivier Travers, who runs Aigles du Léman park.

“We’re in the final phase now, making up the aviaries and moving the birds in. The aim is for the first white-tailed eagles born here to be released in July 2022 and repopulate the area” Mr Travers told France 3 Alpes.

Mr Travers will welcome a total of five breeding pairs to his wildlife park. The first of the new aviaries to accommodate the white-tailed eagles has just been set up and is designed to ensure minimal intervention by keepers.

The first pair of birds will be monitored to ensure they settle in, before another four aviaries are set up for a further four breeding pairs.

While the adult birds will remain at the park, their offspring will have access to special ‘double’ nests, allowing them to leave the aviary and return at feeding time, to help equip them for life in the wild.

“In this way, we are hoping to create a population that stays for longer and is attached to the site,” the falconer added.

The plan is for six young birds to be released in the first year, to test various aspects of the reintroduction programme including how the parents raise their young and also the tracking devices on the birds.

“We know we’ll have to release lots of birds in order to have four pairs by the lake in five years’ time, when they reach sexual maturity. That’s the aim of our programme”, said Mr Travers.

If all goes well, the following year, 10 young birds will be released annually over eight years, with a total of nearly 85 birds being reintroduced to the area.

Ultimately, the falconer hopes to establish a population of white-tailed eagles in the Lake Léman area and even attract more from other parts of Europe.

They are some of the largest living birds of prey and it is thought that reintroducing them could help restore some balance in the food chain and control an increasing population of cormorants.