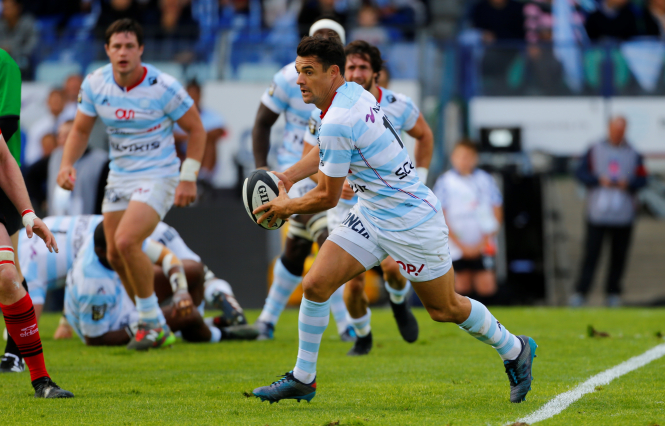 The double-world champion, three-time Super Rugby winner, and leading points scorer in international and Super Rugby history has just called time on the French stage of his playing career after two-and-a-half seasons in Paris where his contract made him the first €1million-a-year-player.

He said: “After winning a World Cup in 2015, I thought nothing would get close to that feeling.

“Being down to 14 men after 18 minutes and to be able to fight through and win that title was a real highlight.”

Carter kicked five penalties in a man-of-the-match performance at the Nou Camp after teammate Maxime Machenaud had been sent off for a dangerous tackle.

It was the New Zealander’s second Top 14 crown. He had won a first by default during an injury-shortened stint with Perpignan in 2008/09.

This is a video from my first test match for the All Blacks. The day my wildest dream became my reality. If you watch closely I started the match in #12 and ended in #26 because I ripped my #12 early in the match! Not ideal but it means I have 2 jerseys to cherish pic.twitter.com/ASzK5uBiMc

He was already the game’s biggest draw when he joined the Catalan side, but played just five games before a ruptured Achilles ended his role in the club’s title-winning campaign.

That taste of France had made him realise he wanted more: “I saw what it was like to live in France. I knew I wanted to return and play for more than six months.

“Although I didn’t play a lot of games with Perpignan, I realised how much the Bouclier de Brennus [Top 14 trophy] means to people – to the supporters, to the players. I wanted to play in the Top 14 again, and also I had aspirations of playing in the European Championship.”

Carter and Racing were a perfect match. As well as winning the Top 14 title, they reached two European finals on his watch, losing to English side Saracens in 2016 and Irish province Leinster earlier this year – a match he was forced to watch from the sidelines after suffering a hamstring injury the day before.

Two of our founders go head-to-head!
See what happens when @DanCarter challenges @billyslater to kick a goal from the corner post! #bricklanebrewing pic.twitter.com/F0ESPS5a6M

He and his family – he married former New Zealand hockey star Honor Carter in 2010 and the couple have two children – have discovered the joys of France beyond the pitches of the Top 14.

“I love the country and how beautiful it is. The monuments, the cathedrals, the museums – the architecture, in particular.

“Driving around Paris, you’ll often pinch yourself that you live in this beautiful city; surrounded by these buildings that are older than modern New Zealand.

“The west coast is completely different to northern areas. Then you go down to the Mediterranean. It’s just an incredible country to experience travelling through and living in.”

It surprised him just how much there is to see in just one European country.

“I thought we’d be travelling through Europe on a spare weekend, or during holidays, but you spend all your time going to different parts of France. We’ve been here for two-and-a-half years and travelled a lot through France, but there’s so much we haven’t seen.”

One part of the southeast was a particular favourite. “We fell in love with Provence, around the Lubéron.

“It’s a beautiful part of France. Both off-seasons we spent a bit of time down there, unwinding.”

Adapting to the French way of life was straightforward because the Carter children were so young.

“Our children were only two-and-a-half, and six months when we arrived, so it’s not like we were taking them away from friends or school.

“My wife always knew that we’d return to New Zealand one day so she enjoyed it for the experience that it was. I’m sure there’ll be lots of things about Paris and France that she’ll miss and we’ll both miss now we’ve left.”

But there was one minor sticking point – the language.

Carter admitted to “giving up all my excuses for not speaking French as well as I probably should”, when discussing his attempts to break the language barrier.

He had done brief post-match interviews in French, and taken part in an online video tongue-twister challenge with fellow All Black and now-retired Pau player Conrad Smith, but said: “To be honest, I’m still not all that comfortable speaking French, even though I can speak a very little bit and understand a bit.

“We spoke English at home, and there were seven other Kiwis at the club so you weren’t forced to speak French all day, every day.”

Now, the French adventure is over, and his focus is on the next and likely final stage of his playing career; a two-year deal in Japan with Kobe Steelers.

“I hadn’t thought too much about it before – I was focusing so much on finishing the season with Racing – but now it’s been a few weeks since we’ve finished, I’ve started to think a little bit about Japan and I’m pretty excited.”

Here is a tweet from the Top 14 organisers which show off some of his achievements in his time in France with both Perpignan and Racing...