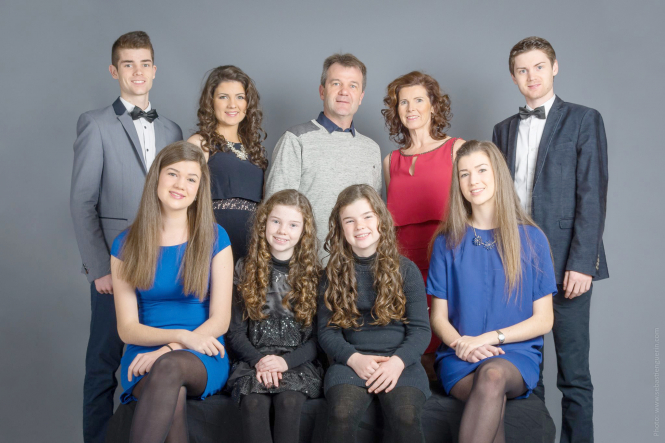 Maria Doyle Cuche’s voice bursts through the phone from her home in rural France.

She is singing You Raise Me Up in flawless, clear tones as her way of explaining who Brendan Graham is.

Graham, one of Ireland’s most prolific songwriters, wrote Wait until the Weekend Comes. In 1985 the teenage Maria (singing as Maria Christian) opened the Eurovision Song Contest by singing that song.

Born into poverty in the Irish border town of Dundalk in 1965, she became blind at the age of nine through a rare genetic illness but went on to tour America at the age of 13 and then win the hearts of the public in the Eurovision Song Contest.

A few years later she married a Frenchman she had met just six weeks earlier and then moved to Chanteheux in Lorraine, north-east France, where they have raised seven children.

She remembers her life vividly, recounting details as if she were watching a film in her head.

She remembers winning a local song contest aged five, singing Frankie Avalon’s Why. “I’ll never let you go, I think you’re awfully sweet” were lyrics her mother sang to her as a child and the words Maria sang to her own brothers and sisters in Dundalk.

The first four months of Maria’s life were spent inside an Irish Magdalene Laundry, one of the institutions run by nuns where “fallen” women notoriously suffered horrific mistreatment.

Her mother Eileen had refused to give her baby up for adoption and managed to leave the laundry after 11 months. She married a man named Patsy McCabe and started a new life.

Her family fell on tough times, struggling to pay the bills. “One time, when we had an electricity meter installed, my mammy broke it to recuperate the 50p coins she had fed into it so we could buy bread and milk.”

For Maria, singing has always been a tool of empowerment. When one of her sisters died aged 2, Maria’s father turned to alcohol and her mother to valium.

“I used to sing to keep the atmosphere light at home,” she said. “I knew my voice would help me through.”

Then, aged nine, her eyesight started to fail due to a rare genetic condition known as Stargardt disease. Maria recalls her mother’s words: “He closed your eyes, but he gave you a voice. That will open doors.”

“And mammy was right,” Maria says. “Who I am today is because I was blind. If I went on Eurovision and toured America and had seven kids, it is because I am blind. I want to show to everybody that, if I could do that blind, what can somebody normal do? You can do even more.”

Aged 13, she escaped from a residential school for the blind in Dublin that she hated. Despite her lack of eyesight, she travelled the 50 miles back to her family home in Dundalk.

“I knew the way because me and mammy used to take the bus when I was younger. I had a sixth sense. By the time I got home, everybody thought I was dead. The blindness gave me a great strength, the will to fight.

“I used to love looking at the stars. I said to myself ‘Imagine that your blindness is the sky at night and you are the little star that’s there shining in the corner. That’s what you’re going to be like, one of those stars, up there for the world to see. For over 40 years I’ve been fighting so that this blindness doesn’t put that little light out.”

With the news of her impending blindness came the realisation that Patsy McCabe was not her biological father. Her real father was a Spaniard, who unknowingly carried the recessive gene for the disease. To this day, he is unaware that Maria is his child. She hopes he will hear about her book and make contact.

At the time, nine-year-old Maria said to herself: “I’m special. Maybe my Daddy is Zorro. It doesn’t matter if I’m going blind, I’m alive, I know what it is to see. I have working legs and working ears and I want to be a singer. You don’t need eyes to sing.”

Maria’s dreams became reality when a group of Americans saw her singing, aged 13, at a festival and made the decision to take her to America.

“That’s when my life changed,” she said. She went on tour, and won the hearts of the American people, who even set up a Maria McCabe fund for her, in the hope of finding a cure for her blindness. In 1985, songwriter Brendan Graham picked her to do a demo of the ballad Wait until the Weekend Comes and suddenly she found herself opening the Eurovision Song Contest in Gothenburg, aged 19.

Maria described that week as being like a Cinderella ball. “I didn’t win but I didn’t care. It was stunning just to be a part of it. I didn’t talk at all about my blindness. I just said I had a problem with my eyes and needed glasses.”

A romance with Richard Herrey, the Swedish winner of the previous year’s song contest, was lapped up by the press, but they split due to religious differences. “He was a Mormon and I wanted to stay Catholic.”

A few years later she met the man who did become her husband: ironically, a Mormon missionary on a trip to Ireland from France.

Within six weeks they were married and expecting their first child. Turning down an offer of a record contract from a company in London, Maria and her husband moved to France in 1992 when jobs were scarce in Ireland due to recession.

Maria says moving to rural France was one of the hardest things she has ever done.

“I didn’t know anybody, I had no family, no friends and I couldn’t speak French. I was very homesick.”

While Maria’s husband worked in a local DIY shop, she raised their seven children, now aged between 12 and 26. Unable to drive due to her blindness, this was a struggle.

“Nothing in the village was adapted for blind people. We would walk up and down the steps to the school and the village with the pram, soaked to the bone in the rain. It was awkward and hard to get around but I was used to it. I just had to get on with it. The kids were my help.

“Nobody offered us a lift. People just thought I was a stranger who couldn’t speak French with a gang of kids. Many didn’t even realise I am blind until recently.”

Only six months ago, a wheelchair accessible paved slope was built alongside the steps leading up to the village that Maria has had to climb for the last 26 years.

“I did make France my home in the end but it wasn’t easy. Now I have my own clan with loads of friends in the village and everybody knows me.”

Music runs in the family. “I have a pianist, violinist, cellist, flautist and guitarist,” she said. “The dream would be to record an album with all of us or to represent France in the Eurovision Song Contest.”

Last year, the French publishing house Plon offered Maria a book deal following an inspirational TEDx talk she delivered in Strasbourg. The title of her autobiography On ne voit bien qu’avec le coeur is drawn from Antoine de Saint-Exupéry’s novel Le Petit Prince. The full quotation translates as “It is only with the heart that one can rightly see; what is essential is invisible to the eye.” When her husband read her book aloud for the first time, Maria said it felt “better than a story”.

Maria ascribes her outlook to her undeterred belief in a higher force that gives purpose to her life.

“I want to give the strength and courage to those that have found out their child is blind, or somebody recently diagnosed with breast cancer, or any bad news. Anything is possible if you want it enough. If you have the vision to live, resist and fight it, you can put your mind to it. I am living proof of that.”