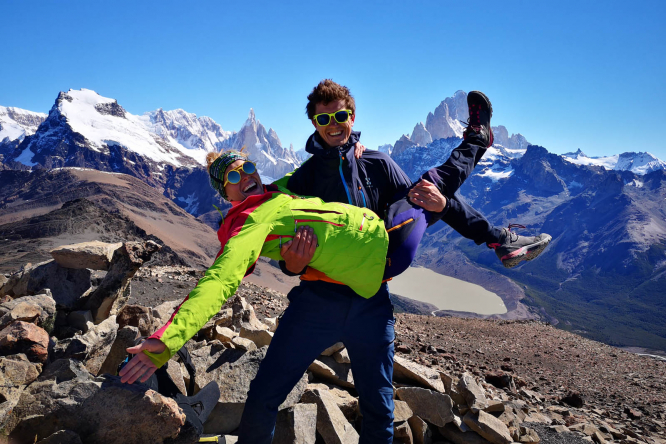 'Follow your dreams, whether or not you have a chronic disease. CF can be difficult to manage, but you can do more than you think' says Fiona Malagutti Pic: Courtesy of Fiona Malagutti

CF is an inherited disorder which results in mucus, sweat and digestive juices becoming overly thick and sticky so they block organs, particularly the lungs and the pancreas.

In the past, it reduced life expectancy but modern medicines are making managing the condition easier.

People with CF can expect to live into their 50s. Fiona, who is now 33, was diagnosed at eight months old.

“The diagnosis was a shock for my parents but, for me, I grew up with it so I thought it was normal. It was only at school I started to realise that other children didn’t have to take medicine, do physio and go to the doctor all the time.”

She said her family are all sporty and especially keen on skiing, so CF notwithstanding, she has always been sporty too.

“In the past, sport wasn’t recommended for people with CF, so I was very lucky.

“Having CF was just part of my life as I grew up.”

After completing her education, she got a job in a pharmaceutical lab, but always dreamed of travelling.

Finally, in 2019, she founded a non-profit association called Vaincre la Mucoviscidose (Conquer Cystic Fibrosis) and gave up her job to spend a year exploring South America in a van with partner Nicolas Depoorter.

“We took 30 kilos of medicines, which was enough for six months, but over the year I didn’t need more supplies. Hot, steamy places are tough for me, but we visited them fast and moved on quickly.”

Muco Sans Frontières organises inspiring adventures to promote sport and improve life for people with CF. “The South American adventure was amazing. I didn’t need a doctor once. We started in Mexico and headed south to Colombia and then on to Panama, the Galapagos Islands, Peru, Bolivia, Paraguay, Uruguay, Argentina, and finally Chile.

“I had always wanted to go. It was just a continent which attracted me: the space, the environment, the culture and all those mountains and high plateaux.”

She said travelling with all her meds and treatments so far from her comfort zone was complex, but it went very well. “When I came back, I just wanted to tell people that this sort of adventure was possible for people with CF.

“You can travel, you can do things. In fact, we had more problems with the van than with my health!”

Fiona said she would love to do another long journey one day but, in the meantime, she’s working with her association. “The aim of the book is to encourage others to do sport and to travel. Follow your dreams, whether or not you have a chronic disease. CF can be difficult to manage, but you can do more than you think.”

She also wants to give hope to families and friends of those with CF.

“You have to organise things in advance, and plan for all eventualities, which makes it more complex, but everything is possible. Before leaving France, we researched hospitals and learned Spanish vocabulary like ‘prescriptions’, so in case of an emergency we’d know what to do.

“As it turned out, I was very well and only needed one short course of antibiotics, at the end when I picked up a cold.”

Now living in Annecy, Fiona completed a gruelling challenge last October when she ran round Lake Bourget in one day: a distance of 75km and a climb of 3,600 metres. Her most recent challenge was to climb Mont Blanc with three other people living with CF.

“We wanted to do it mainly to prove we could.

“We wanted to show what people with CF can achieve. But even in summertime at that altitude, there is snow, which makes walking difficult.”

The group went with qualified guides and prepared by training intensively and getting acclimatised to the altitude.

“I also did a lot of work to improve my cardio fitness.”

Extremely fit sportspeople can walk up Mont Blanc and back down in a day but Fiona and her group took four days to do it, which meant taking a lot of equipment and food.

“The plan was to camp at 3,200m the first night, and then at 4,800m for the second night. Then, having reached the peak, to come down to 3,800m and camp again before walking all the way down the next day.” The ascent didn’t go to plan. “Because of the weather, we decided to delay the final ascent, and left at 2.30am.

“It was very dark so we were wearing head-torches. It was cold and hard going, walking on fresh snow. We managed to get to the refuge at 4,400m but, unfortunately, as we arrived I had an attack of breathlessness.

“I couldn’t stop trembling and couldn’t catch my breath. I think it was a lack of oxygen. I had to abandon the attempt.

“It was frustrating to see the peak looking so close, but it was still three or four hours of hard walking away, so I was obliged to abandon it this time.

“I’m not disappointed, though, because it was a great experience. It’s very silent up there. I don’t know if or when I’ll try again, but it will always be an ambition.”

The profits made by her association Muco Sans Frontières and from sales 'of A Couper le Souffle' go towards CF research and supporting people with CF.

Eure in Normandy turns negative visitor reviews into marketing tactic
24 November 2021
More from Interviews
More from Connexion
Get news, views and information from France
Join the newsletter
Subscribe to The Connexion