Animal activist turns French off meat a menu at a time 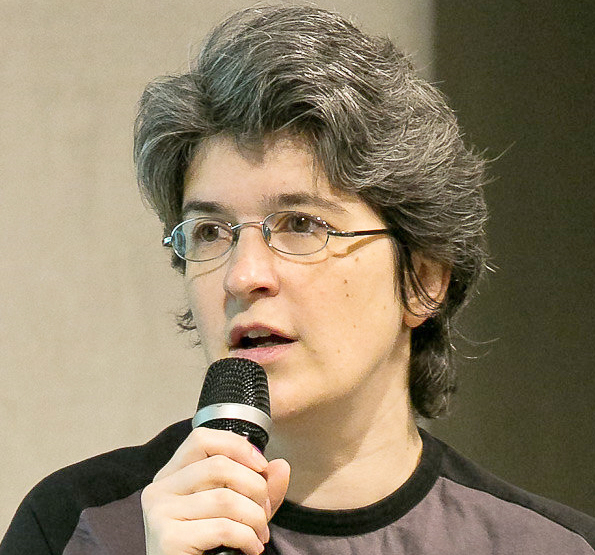 Ending France’s love affair with meat is not easy, but it is happening, says Brigitte Gothière founder of the L214 animal rights group and a leading proponent of veganism in France.

She says convincing people that being vegan is not only possible but a healthy choice is working slowly.

“We have to overcome our great tradition of gastronomy. We need vegan recipes and food options.

“We’re working hard to persuade all restaurants in France to put at least one vegan option on their menus, and that’s starting to happen. We also want food-processing industries to offer vegan dishes.

“The aim is to encourage people to turn away from intensively farmed animal products or, at the very least, to reduce their consumption of them.”

Ultimately, Brigitte would like to see the entire French population become vegan so no animals are farmed at all.

“The argument that if we don’t eat them they won’t exist is illogical.

“Why can’t we have animals in the fields without eating them? If we were all vegan we would have space to do so because growing crops for humans takes less land than growing them for farm animals.”

The public does not see farm animals anyway, she adds, as 90% of them spend their entire lives inside.

“You see a few cows and sheep around, a few goats in the Alps, but almost no pigs live outdoors. Once we stop eating them, there will be land left over and we can give it to animals. Not like the cows in India, but in a more organised way. It would be a society which would take account of everyone’s needs, including animals.”

The question of managing the young produced by animals living freely still needs thought, she admitted.

“Companion animals, for example, don’t have to be of the same species. And sterilisation could have a place. Nature isn’t perhaps the best model because many atrocious things happen in nature. But contraception works, perhaps for animals too.

“It’s difficult to see it today because we’re so dependent on animal farming, we don’t see it. And people resist new ideas.”

She is now president of the organisation, which is responsible for numerous exposés of brutal treatment of animals in abattoirs across France; who could forget the images of pregnant cows being slaughtered!

It has also published horrifying images of laying hens trampling each other to death in their cages.

The association’s name refers to Article L214 in the 1976 Code Rural which, for the first time in France designated animals as sensate beings: “Tout animal étant un être sensible doit être placé par son propriétaire dans des conditions compatibles avec les impératifs biologiques de son espèce.” [Every animal, as a sensate being, must be kept by its owner in conditions compatible with the biological imperatives of its species.]

Article L214 has never been seriously taken into account, either in practice or in the courts. “That’s why our work is so necessary,” said Brigitte, who also highlights the concept of ‘speciesism’ (discrimination against other species). “Shouldn’t all species have the same rights?”

L214 deliberately takes a rigorous, logical, fact-based approach. “I taught physics and Sébastien is a maths teacher, so we both have scientific backgrounds.

“We make films, take witness statements from professionals working in those places, study scientific publications and highlight the regulations in force.”

Their videos, photos and reports have appeared on television, press and social media all over France and beyond.

They have persuaded France’s leading supermarket chains, catering firms and processed food manufacturers to commit to ending the use and sale of eggs laid by hens in cages.

“We also campaign against intensively reared rabbits kept in battery cages including those used to produce angora wool, industrial force-feeding of fowl, and intensive pig farming, for example.

The campaign to get laying hens out of cages still hits blank walls all the time, she said. “People want to preserve the status quo. But we need to reflect and think how we can organise a world where animals have the same rights as humans.

“People’s attitudes and vision is what has to change. We lack imagination. But we will continue campaigning forever and we rely on collective intelligence.”

Polls show French public opinion is overwhelmingly in favour of ending cages for laying hens. “We are also working on fishing and abattoirs but our aim is to raise standards in every type of animal farming.”

Their website www.politique-animaux.fr lists all French politicians, rating their attitudes to animal welfare taken from their positions on various campaigns, how they have voted, and what they have said.

“It’s important for people to see what their elected representatives think. The public want change but politicians aren’t aware of that, they don’t hear the message.

“They are way out of step with the public on animal rights. For example, more than 50% of the public are against ‘gavage’ – but it is still legal and it still continues.”