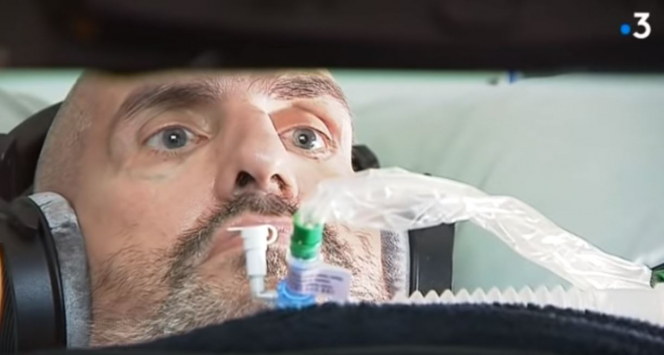 She said: “He started doing music again in January, when he realised he could work with his eyes.”

He took samples from Kate Bush, one of his favourite artists and recreated music with a software on his computer. Pone, the former member of the rap group Fonky Family uses a computer which detects the movement of his eyes and make the mouse move accordingly.

“It took longer” to make the album but the musician wanted to show that it is possible to work again, despite the disease.

Guilhem Gallart (his real name), 46, was diagnosed with motor neurone disease, a degenerative muscle disease, in 2014. He had a tracheotomy and a gastrostomy and is fed through a tube.

His wife said: “It was a big shock when he learned about his illness. He needed time to pick himself up. It has been a long process and faith has helped him.”

Now, Pone, who has two daughters and lives with his family near Toulouse, wants to show that you can still have a “normal life”.

Mrs Gallart said: “He is at home, he has a normal family life. He wants to show to people that yes it is hard but everything is still possible despite the illness. He has a happy and peaceful life.”

He has created his own association La SLA pour les nuls, to raise awareness on this disease also called Amyotrophic Lateral Sclerosis (ALS) – Sclérose latérale amyotrophique (SLA) in French. He regularly writes about his illness and his own journey on his website.

His album, Kate and Me (in homage to Kate Bush), is available on all the streaming platforms and 300 collector vinyl records will be released. All the profits will go to his association La SLA pour les nuls.