Cookie Consent by FreePrivacyPolicy.com From a galaxy far, far away to France French News and Views in English | The Connexion
9 may 2021
Classifieds Currency exchange Newsletter
Login Register BASKET
Facebook Twitter 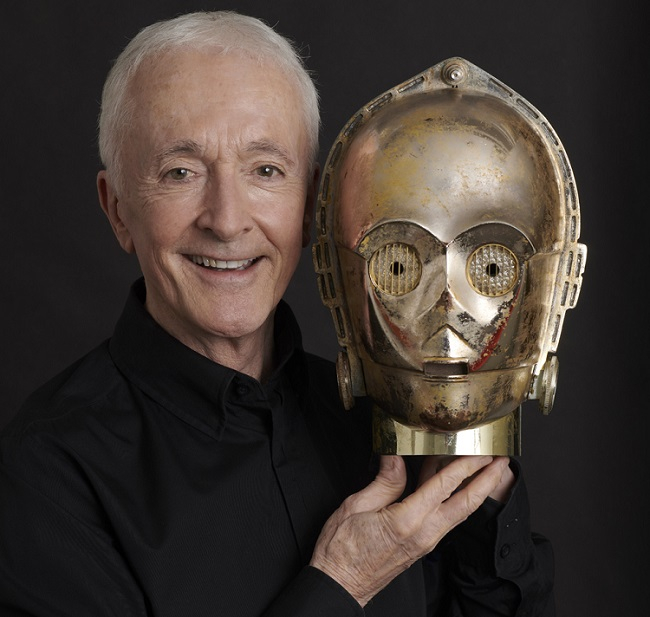 British actor Anthony Daniels has played C-3PO in dramatic Star Wars movies for 40 years so it is little surprise that he loves escaping to relax in Provence.

Although he still spends most of his time in his London home or travelling between the US, UK, France and Japan, he has had a home in Mont Ventoux, Vaucluse, for 25 years.

He said: “My life here in France is very different from being at film premieres in Los Angeles or London.

“I have to acclimatise to the gentler pace of life here.

“I got used to greeting everybody, saying Bonjour messieurs dames or au revoir when I arrive and when I depart, and that’s become charming. I also understand the supermarket system, which is very slow compared to London. You must stand and wait.

“But I love the way French cashiers and everyone in the queue is so patient when you bring out a big package of money and have to count the centimes.”

Occasionally people recognise him in his village, but most of the time fans do not expect to see him.

He said: “Sometimes people come and talk to me but they are discreet.

“I look different. I wear gardening clothes or casual clothes, so people are not used to seeing me like this.”

Although C-3PO is said to be fluent in “over six million forms of communication”, Anthony, 74, says he can speak “adequate French” but does not think he is fluent. He sees himself as “a schoolboy who tends to translate directly what is in his head”.

When in France, he likes gardening with his wife Christine and going for long walks with friends.

Over the years, he has made friends with French, British and Spanish people. He said: “I find French and English people get on very well.

“We understand each other. It’s not surprising so many British people live here and want to stay, despite Brexit, which we did not wish to happen. It’s good to have friends here and it’s very helpful, as they can explain things you have to do in the country, like administrative stuff and technical things. I think French people are very funny and helpful.”

They recently moved to a smaller house, closer to the village centre, where he wrote his first book, I Am C-3PO: The Inside Story.

It has just been released in the UK, and it is published in French as Je suis C-3PO: les souvenirs ne s’effacent pas, on April 17.

He said: “It was a very cold winter and we had no central heating so I was covered with blankets and just had my fingertips on the keyboard.”

His memoir recalls meeting Star Wars director George Lucas in 1975 – and turning down the role of C-3PO as he did not want to play a robot.

Anthony now finds this “amusing” as the character has changed his life.

“There was a time when I wondered if I should stop doing this [playing C-3PO] but it would have been stupid. I was typecast but sometimes it’s very good to be typecast, especially when it goes on for over 40 years, you are very lucky,” he said. He thinks most viewers enjoy finding humanity in his character, who is always very concerned about others.

Anthony will be at Le Dôme in  Marseille on May 23, without his C-3PO costume, at a screening of the second Star Wars film followed by  an audience chat.

STAR WARS IN FRANCE... they have their own ways of looking at the film

Star Wars seems to owe much of its origin to French comic book Valérian and Laureline, which had many of the themes – and even a ship like the Millennium Falcon.

The BD, by artist Jean-Claude Mézières and writer Pierre Christin, started in 1967 and Stars Wars came out in 1977.

Director George Lucas and his crew never acknowledged the similarities but Mézières and Christin got revenge, with Valérian and Laureline meeting Luke and Princess Leia in a cartoon, saying: “Fancy meeting you here.”

It can be little surprise in a country that still has medieval tournaments and a love affair with the Three Musketeers that lightsaber duelling is recognised as a competitive sport by the French fencing federation.

The first Star Wars was renamed La Guerre des étoiles for its French release in 1977 but has the original name from 2000. France has another peculiarity... as it is hard to say “H” in French, Han Solo became Yan Solo and the difficult “th” in Darth Vader gives Dark Vador.

Teachers have started using Star Wars in classes with one textbook, Faire des sciences avec Star Wars, being used to get students thinking about everyday science in the films.

cinema
people and characters
More from Interviews
More from Connexion