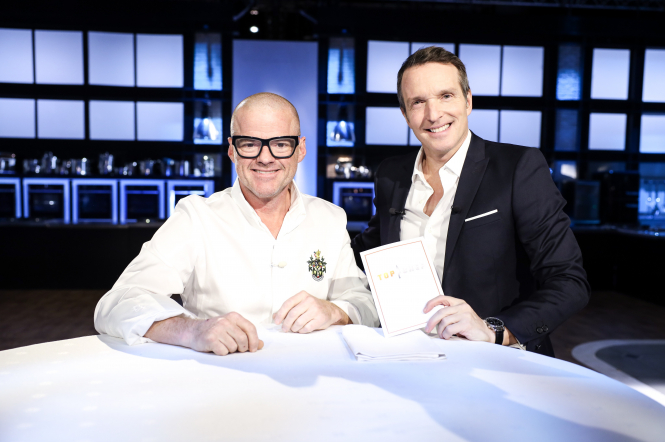 British viewers of M6’s hugely popular series Top Chef will have spotted a familiar face among this season’s lineup of special guests.

Heston Blumenthal, who turned the gastronomy world on its head 25 years ago, is among the great and good putting in an appearance.

He’s not on any old episode of the top-rated TV show, which attracts well over three million viewers a week. Blumenthal, 54, who moved to the village of Eygalières, in Les Alpilles, in 2018, brings his blend of wisdom and wizardry to the quarter-finals, putting those chefs still in the running for this year’s title through their paces unlike anyone else. “They approached me,” he said, when asked how he got involved.

“While we were talking, they said they’d never had a British chef on and it was also the first time they just had one guest chef for a whole episode. This series is about innovation, so it was a fantastic opportunity.”

His experience working on several finals of another major culinary series, MasterChef Australia, meant Blumenthal, whose spoken French is good, knew what to expect.

Due to Covid-19, it was not exactly business as usual.

“There was a lot more distance and there was something kind of discombobulating about it.

“I wanted to get key points across in French, but talking about the psychology of eating, trying to get it in a one-liner...

“It’s one thing talking about caramelising your onions a bit more and putting more salt in, but an emotional connection was tougher.”

The gastronomy world is a small one, and Blumenthal already knew three of Top Chef ’s four judges: Philippe Etchebest, Hélène Darroze and Paul Pairet, but they, and Michel Sarran, were blown away by Heston’s challenges.

The first was flavour pairing, in which foods that may seem unlikely partners in a dish work very well together.

'I set the chefs – who had never had a challenge like this before – something that on paper you’d think wouldn’t work, but when you get the pay-off, it works magically'

“They had their mentor chefs to help, but each flavour pairing challenge had different pitfalls, things you have to be careful about that I knew through years of working with them, but they didn’t. They only had a few minutes and that was both the trouble and the beauty. The one that won was a great dish.”

The second challenge was called “Counting Sheep”, and Blumenthal wanted to tap into the sensations of going to bed. “I based it around the most recognisable baby aroma that most of us know: Johnson’s Baby Powder,” he said.

“So we did this dish. It took a long time to research. I worked with a perfumier to look at what molecules were in baby talc and cross-referenced to find what other foods they were in – plus, I used my nose.

“We came up with a dish with pistachio, malt, crystallised chocolate, tonka bean, coriander, a little bit of rose and lychee... there were hundreds of ingredients.”

The finished result for anyone who has not seen the clip includes a floating white pillow. Of course, there’s more to it than meets the eye, but we won’t give anything away.

The third challenge took him back to the place that first inspired him: L’Oustau de Baumanière restaurant in Les Baux-de-Provence.

It was there that a teenage Blumenthal fell in love with food and embarked on the journey that led him to the Fat Duck in Berkshire, and to becoming a superstar.

“I told them my story and asked them to cook an old Baumanière lamb dish, and it was about my connection with the dish, my memory with the food and the senses.

“I found that with all three challenges, it wasn’t just ‘now you have to cook a saumonière’, it really was about a focus on your connection with your environment, yourself, ingredients and emotions.” Top Chef has also brought him full circle, which he realised during filming: “I’m introducing, talking to the judges in the quarter-final, and I thought ‘who’d have thought, as a 15-year-old kid, I’d be standing here, almost hosting France’s biggest cooking show in the place that inspired me to cook in the first place?’.”

His appearance on Top Chef – arguably the biggest rolling out of the red carpet France could muster – might also be a springboard for more TV appearances, something he is not ruling out.

“We are very settled, which I’m valuing after so many years of seemingly working 120 hours a week.

“I’ve been working on the microbiome, gut health and mental gut health for about seven years now, and it’s been an incredible period. So I feel, whatever they may be, my best years are ahead of me.”

chef
food and drink
More from Interviews
More from Connexion

21 hours ago
4
Undelivered letters: Why is France’s postal service struggling?