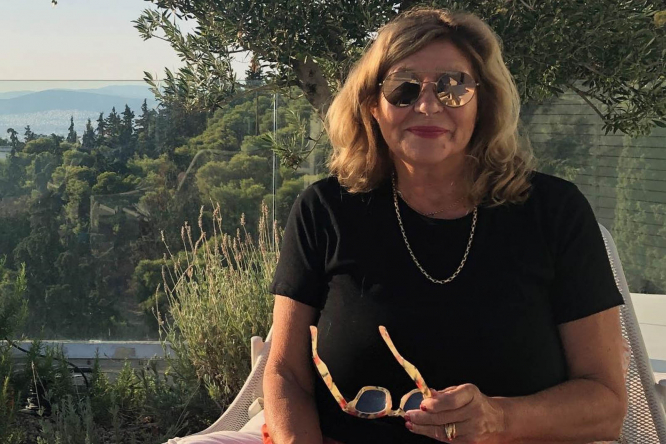 “I got my first thing published when I was 10. It was a silly story about losing my petticoat which I sent off to Girl magazine.

“Amazingly enough, they printed it and sent me a five-shilling postal order, so there I was – a published author. It really gave me a boost, so I immediately wrote a play and acted in it at school and we also performed it at a local retirement home.”

Carol’s family was in showbusiness, so she took it for granted that she would grow up to be an actress.

“I never doubted that for a minute, but I dreamed of writing. It was a very private ambition, however.”

Her acting career duly blossomed, with roles in Bouquet of Barbed Wire, Another Bouquet, Golden Pennies and All Creatures Great and Small.

“I used the money to travel to places off the beaten track, like Bali, and I kept diaries of my experiences, and my writing grew from there.

“I think that’s why locations are so important in my writing. A location can actually be a character, a house could even be a character.”

She met her husband, French filmmaker Michel Noll, when she was filming in Australia. “He asked me to marry him on the first date, but it took me a year to accept.

“In the meantime, he was in France and I was back in the UK.”

While working on All Creatures Great and Small, she wrote her first children’s book, The Haunted School.

“It was turned into a mini-series for children and Disney picked it up.

“Back then, children’s literature didn’t have much kudos, but it sold 160,000 copies and I got a contract with Penguin. So it went from there.”

In 1986, she and Michel bought the house of their dreams in Provence and gradually, over the years, have bought more farmland around it.

“I started writing the Olive Farm books, and they became very popular. They are memoirs, so they are autobiographical, but obviously I fictionalised and re-arranged the truth to make them read better.”

She has also written a large collection of stand-alone novels, and five historical novels for young adults.

“If I’m really up against a deadline, I start at 5:00 – but that’s only when I’m reaching a particular point with it, or am getting so involved that I can’t stop. But I don’t do that every day!”

Authors often talk about being either ‘plotters’ or ‘pantsers’. Plotters work out in advance exactly what happens in each chapter, and pantsers let the characters write the plot and see where it goes.

“I don’t think I fall into either category,” Carol said. “I feel like I’m reaching for an invisible story that’s already there. Rather than flying by the seat of my pants, I feel I’m revealing a story. The characters are already set in their location, of course. It’s probably because I’m an actress. It’s as if I have my block of wood or stone and eyes closed, hands reaching out, I keep stroking and touching it to reveal the sculpture ... a process of revelation.”

She said that, at one point, the farm became a bit of an obsession.

“I wanted to make the best olive oil in the world, but now I understand that we take from nature what we can, but if we can’t harvest every single olive, the rest goes back into the earth. It is a constant task.

“You have to water when it’s needed, and do the harvest. But we’ve become a little more Zen about it now.

“I remind myself that the work on the farm is a hobby and a passion, but writing and acting is my job, a job that I’m driven to do. I had to get the farming thing back into perspective.”

Living in France, she appreciates that the whole cultural arena has more respect.

“You can talk to the plumber about the arts. Because we live near Cannes, lots of people around here know a lot about film, and take it seriously. Far more public money goes into the arts in France than in the UK.

“During the pandemic, the French government has supported culture and the arts – they don’t know how lucky they are! Despite that, for many people it’s been a nightmare but, compared to the UK, people working in culture are so well off.”

She said France features as a location and as a character in most of her books. “The hills, the mountains, French identity, history, culture and the way French people conduct relationships between people. I think all of that is in my books.”

Her new release, An Act of Love, is set in France during World War Two.

“It’s not my first foray into historical fiction. I wrote five books for Scholastic in their My Story series, which are based on solid historical facts, but written in an accessible way using a first-person voice.

“It’s a wonderful way to teach history, and I love writing them. I did one about the Irish potato famine, and I think that’s a fabulous story.

“I’ve done Suffragettes, cinema, and one called Nowhere to Run, which was about a Jewish refugee leaving the Warsaw ghetto before it was destroyed and fleeing to Paris and then to southern France.”

Researching for that book, she discovered that several mountain villages inland from the south coast of France hid enormous numbers of Jewish people during the war.

“Many Jews lived fairly openly in the free zones, especially those controlled by Italian troops who weren’t that bothered about rounding up Jews.

“Saint-Martin-Vésubie was one village. During the war, it doubled in population. But after the Italian surrender in September 1943, things were tougher.”

Having uncovered the story and told some of it for a young adult audience in Nowhere To Run, Carol said she felt there was more to say, and wanted to revisit it for adults. “I felt as if the story was calling me back.”

An Act of Love is set in this period and tells the story of Sara, a girl on the brink of womanhood, and a young local doctor.

“I don’t want to tell you too much, or spoil the story, but everyone’s lives are in danger, people are being sent to Auschwitz. It is a compelling story.”

The main plot ends just after the end of the war but the novel is book-ended in the modern day.

“Although it is one woman’s story, it has far more characters than my usual books. So far, reviews have been really good, and I’m really passionate about it. People are already talking about filming it. I’m not thinking of a sequel, but you never know.”

In the meantime, she has started writing a new novel. “It’s completely different. I’m feeling my way...”