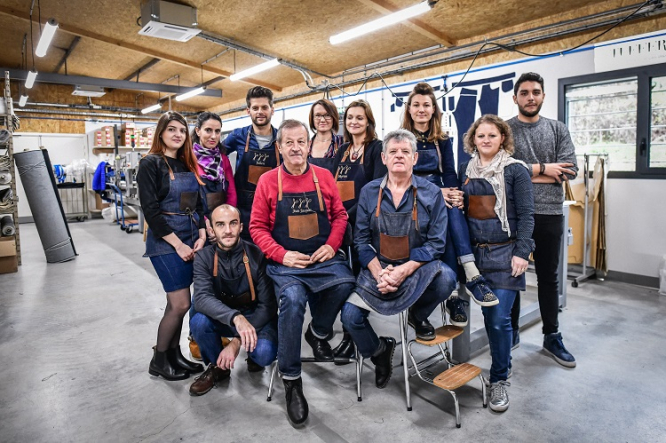 Julien Tuffery is the great-grandson of the man who arguably invented that fashion staple, jeans.

In 2014, he and his wife, Myriam, turned their back on promising careers  as engineers, and re-opened the family textile workshop at Florac, Cévennes, which had been forced to close in the early Eighties when the textile industry in France collapsed due to competition from abroad.

Now as customers look for more ethical clothing, business is booming. In 2016, the business had four employees.

Now there are 15 and they have built new premises. Last year they made and sold nearly 10,000 ‘Made in France’ jeans, and there is ever-growing demand.

How did the story of the family business begin in 1892?

Célestin Tuffery was a master tailor in Florac who created made-to-measure clothes for townspeople who would come once or twice a year to refresh their wardrobe.

At the end of the 19th century, the Cévennes was cut off from the rest of the world, but that began to change when it was decided to bring a railway line into the area.

That also meant an influx of workers who needed cheap, robust, practical garments, not at all the type of clothes Célestin was used to making.

He rose to the challenge, however, and turned to a tough cloth which had been made for years at Nîmes, but which had recently been revolutionised by mechanical looms which meant it could be produced in volume and cheaply.

Until then, it was not used for clothes, but to protect items during transport and for boats. He decided to use this material which was cheap and hard wearing for the railway labourers.

It came to be called denim, because it was from Nîmes.

Can we be sure he was the inventor of the jean?

We cannot know for sure, but we do know he was one of the first to use this material to make a type of trouser for hard work.

Another aspect which made it cheap was the fact that only one of the threads in the weave was coloured, and that was coloured blue by indigo, which was imported from Asia via the Italian city of Genoa, Gênes in French, which later turned into the word jean.

The other part of the weave was not coloured and that is why denim has this blue and white aspect to it.

We do know that Célestin invented the sewn-on back pockets. Before then, a pocket was an interior part of the trouser, but that was not practical or strong enough to carry tools, so he made this new clothing item and it had a special characteristic as it was made in two parts.

This meant that when the bottom part of the pocket wore out, it could be replaced more cheaply than the whole pocket.

The other innovation was the tiny front pocket, which was used for “pocket” watches.

In our new jeans, we have replaced it with a smart-phone pocket, lined with silver in the thread as protection from potentially harmful waves, which we like to think is in the spirit of Célestin who was always innovating to suit contemporary needs.

We have protected this idea with a patent.

These jeans must have been successful. What impact did they have on the business?

By 1938, the business had been taken over by Célestin’s son, Jean-Alphonse, who understood the potential of denim, and made this workshop the oldest jean manufacture in France.

It became well-known as jeans began to be worn not just by workers, but by everyone.

The company was joined by Jean-Alphonse’s three sons, Jean-Jacques, Jean-Pierre and Norbert and it was at the height of its success in 1960 when 40 men and women were employed to produce 500 jeans a day.

The Atelier Tuffery changed its name to Tuff’s and for several years managed to rival its giant American competitors.

However, in the late Seventies and early Eighties, competition from abroad with cheaper labour destroyed the French textile industry.

A total of 90% of businesses folded in a 15-year period, including Tuff’s which had to close its doors in 1985 and lay-off 60 workers.

This was a real trauma for the Tuffery brothers, who were devastated that so many people had to lose their jobs, and that they could no longer sell their jeans.

Sewing was in their blood though, and so they continued between them to sew between 300 and 400 five-pocket classic jeans a year and managed to keep their skills alive.

How did you come to take over the business?

My father, Jean-Jacques and his brothers were heading for retirement.

They were the last in the Cévennes. Either they could pass on their skills to a new generation of the family or this line of business would close forever.

From 2010, Julien and I began to sense a change in the economic climate with increasing support for products made in France.

We started doing market research. We realised we could stay in Florac, because though it is in a remote part of the country, we could sell via the internet, which makes up 85% of our sales.

We also wanted to make manual work sexier, as for years it has been undervalued in France. So, we decided to take on the challenge.

What makes your jeans more ethical than others bought in a national fashion boutique?

We first decided to train each of our workers to make a jean from A to Z, so their work does not become repetitive.

Our material no longer comes from Nîmes as it has not been made there for years.

Five years ago it was impossible to source French material, but now we have one supplier in the Tarn and one in Alsace, and for higher quality material we turn to Italy.

We are increasing our use of organic cotton and exploring denim made with other fibres.

Traditionally it was made with local fibres, like hemp and wool, so we have one jean made with 45% wool from local Mérinos d’Arles sheep.

When cotton was introduced it took over, because even if it came from overseas it was cheaper and easier to use.

How much skill is there to making a pair of jeans?

We often have visitors to our workshops and they are often amazed at how complex it is and how it is all done by hand.

It takes a year to learn the skills, not including cutting out the 44 pieces required for one pair of jeans.

The seams in particular are not straightforward. It has become a really pleasant place to work.

Our new premises are modern with heating in the winter and air conditioning in the summer and it is open plan so we work as a team.

It is the same as any high tech start-up.

Are you happy you made the choice to take on the Truffery family business?

It was a big decision to take it on because we had good careers ahead of us, and this might not have worked.

But it has been a really great adventure, really chouette.