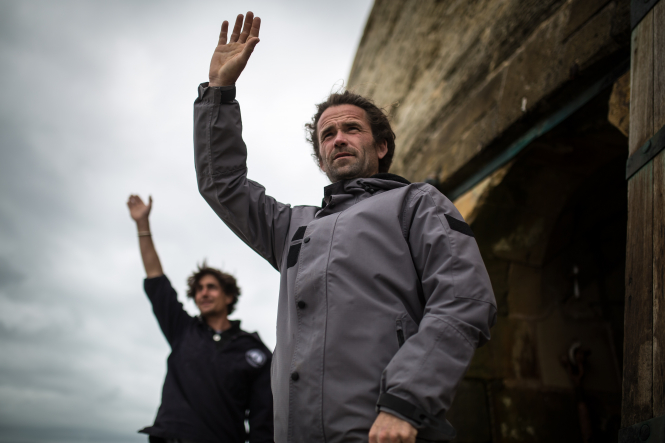 Benoît Jenouvrier has been working at the Phare de Cordouane for nine years, and shares the job with five others Pic: Quentin Salinier

There is only one lighthouse inhabited all year round, and that is the Phare de Cordouan, the oldest in the country, built in 1611 at the mouth of the Gironde estuary.

It is this year’s French candidate for a place on the Unesco World Heritage site list.

Read more: France's oldest lighthouse is 'unique in the world'

Benoît Jenouvrier has been working there for nine years, and shares the job with five others.

Can you explain what a lighthouse keeper does?

The job of lighthouse keeper is not the same as it used to be. When all lighthouses were lived in by their keepers, they would work mostly at night, maintaining and surveying the light. Today, there is an automatic system, so our job nowadays is to look after the building, which is an Historic Monument, rather than the light.

There is always work to do as it is vast. There is the tower plus several buildings built in a circle around the central tower. There are a great number of precious and ancient materials which need looking after. We also have to make sure the electricity generators are always running smoothly.

It is a multi-faceted job. We have to do the work of a mechanic, electrician, plumber, builder, carpenter, painter etc, and in the summer, a tourist guide when it is open to visitors.

Are you and your colleagues at Cordouan the only lighthouse keepers left in France?

We are not strictly speaking lighthouse keepers, but keepers of this lighthouse.

Up until the 1990s you could study for a specific lighthouse keeper qualification at Brest in Brittany. You trained in electro- mechanics so you could look after the light. There are still a few qualified lighthouse keepers, they no longer live on the lighthouses, but are called out to maintain and repair them when necessary.

Each of us come from a different background so that our skills are complementary. I was an electrician, some of us have marine skills, and some tourism qualifications. There are always two of us on duty at a time. We are not allowed to be alone here for safety reasons. We work one week on, one week off, two weeks on, two weeks off and our schedules are staggered so that we are never with the same colleague for more than a week.

Why did you choose to become a lighthouse keeper?

It was quite by chance. I heard they were looking for someone, and as I also loved everything to do with lighthouses, I applied. I like to live in a similar way when I am on land, living in an old stone building which needs looking after, using different artisanal skills. To do that and to be practically alone on a little island in the middle of the sea is something I had always dreamt of being able to do.

Yes. I live on the Ile d’Oléron just to the north and I have never lived more than 200metres from the coast. My whole life is centred round the sea.

We have professional boat pilots who bring us and provisions to and fro from the island but we still need to be able to read the sea. There are sand banks around the island which are constantly changing and with them the surrounding currents, so you need to understand the dangers.

What is it like when there is a storm?

We experience the wildness of the ocean, but less than the keepers who used to live in the lighthouses in Brittany, where the sea is much deeper and they really felt the force of the waves coming in. Here we are on the continental plateau and the biggest waves are broken before they get to us. We still feel the effects of a storm and the wind more than anyone else on land – a little in the same way as someone on a boat – except we have the comfort that our ‘boat’ doesn’t move.

What is the role of a lighthouse nowadays?

They are not as indispensable as they were in the past because there are so many modern navigation aids such as GPS. But the State has decided they are still necessary and that all the great lighthouses must stay active all the time.

You could be on a boat and run out of electricity, or your equipment might break down, but the lighthouses will always be there to tell you where you are, and to guide you. Some small boats don’t have sophisticated equipment so they always rely on the lighthouses to guide them.

Do you have a daily routine?

No, and that is what I love about this job. No day is ever the same. A typical day involves doing what needs to be done.

Is a lighthouse more difficult to look after than other buildings?

Yes, because it is always being attacked by the weather. The limestone erodes easily. We leave it to qualified stone masons to change the stones if necessary, but we have to keep on top of all the bronze and copper fittings, for example hinges in doors which are quickly damaged by the salt air.

Our rooms are decorated with ancient parquet and wooden panelling which dates from 1855, during Napoleon III’s reign and all that has to be looked after.

We tend to think that lighthouse keepers lead a solitary life. Is that true?

Not in the same way as in the past, because there are always two of us, and plenty of people coming and going. In the summer, there are tourists. In the winter there are two of us from Friday to Sunday, but for the past few years there have been renovation works so from Monday and during the week there are always builders and stone masons here.

Do you sometimes like to be alone on your island?

Yes. The type of person who wants to work here is someone who is attracted by being away from the real world and so we are also happy when there are just two of us here.

Do you think it would be a good thing for the Phare de Cordouan to be listed as a Unesco world heritage site? The decision will be made in June or July.

Of course, because it will mean it will be preserved for the years ahead.

What do tourists say when they come here?

They always love their visit. They can only come at low tide so visitors are never here longer than four hours. For safety reasons we can only have 300 visitors a day and about 22,000 come during the six months we are open. We are very lucky because visitors are always pleasant.

They have had to really want to come here, because you have to book a ticket and a boat ride in advance, travel an hour by sea to get here and then walk to the lighthouse and so really appreciate it.

Was applying to be a lighthouse keeper a good choice of job?

It is not for everyone. It can be psychologically hard and some do not last very long. Even though you are seldom alone, you are away from your family.

I have a wife and a daughter, but even though they are not very far away as the crow flies, I cannot see them because I am here for a week or a fortnight. For the moment I love my job enough to put up with that inconvenience.

Around the lighthouses of France in just 19 hours

Who still has to pay the taxe d’habitation in France in 2022?
22 January 2022
More from Interviews
More from Connexion
Get news, views and information from France
Join the newsletter
Subscribe to The Connexion