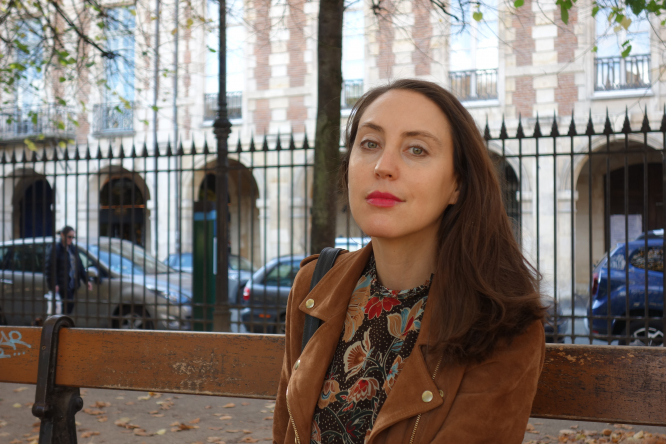 Netflix’s blockbuster Emily in Paris has been accused of not being realistic but it is spot on, says the American woman whose experience of moving to Paris and working in a luxury marketing agency inspired the script. Joanna York met her for coffee...

Of all the criticism levelled at Netflix’s Emily in Paris, the most frequent is that it is not realistic. Commentators from Vogue to the Financial Times have accused the show of being “absurd”, “cliché- stuffed” and “frankly misleading”.

However, behind Emily’s fantasy world lies the life of a real American in Paris who worked with the producer and scriptwriters to provide the inspiration for many of Emily’s on-screen escapades from her real-life experiences.

“I said here’s my life, take everything, and just shared all my anecdotes. Darren Star created this character, but there’s a lot of me in it.”

Rebecca Leffler, now in her late 30s, moved to Paris from New York 16 years ago, and says that, if anything, while parts of the show are exaggerated, many of her stories got toned down.

She gives the example of Emily’s hunt for a plumber when her shower breaks and she finds it almost impossible to get it fixed because of her apartment’s old plumbing.

When this happened to Rebecca, the plumber she eventually hired left the job unfinished – and a refrigerator in the middle of her flat. When she got hold of him to ask why, he gave what he considered an acceptable excuse: je suis tombé amoureux - I fell in love.

Ms Leffler says her professional experiences in a French luxury marketing agency match up almost exactly to the show. She had a boss who bore a striking resemblance to Emily’s tough, glamorous boss Sylvie (“She was like, who was this young American idiot?”). When she first started working in a French office, no one asked her to go for lunch.

“I was the loud American and everyone would look me up and down and not talk to me. That’s how it was. That has been my experience – me being this smiley, optimistic American dealing with French people. Even the ones who are wonderful, kind people are not necessarily, as I would say, effusive. When you first meet them, they’re not as friendly and open.”

Ms Leffler’s journey to Paris was, though, different to Emily’s in one way: she arrived speaking the language, having studied French and cinema at college. After spending a semester in the French capital during her studies at Dartmouth College, she returned after receiving a postgraduate grant, which led to an internship and then a job at Le Film Français.

She became French correspondent for The Hollywood Reporter and a film critic on talk show Le Grand Journal on Canal Plus.

It was on a work trip to the Caesar Awards that she met a film producer who would play a key role in her involvement in the Netflix show.

One morning, she had an interview scheduled with that well-known American producer and the two became friends.

Years later, the producer was having lunch with Darren Star, creator of Sex and the City, who handed him a script for a new show he was working on: Emily in Paris. “He said, Darren, I hate to tell you – you created this fictional character, but she already exists. Her name is Rebecca Leffler.”

Mr Star called Ms Leffler one Friday afternoon at her Paris office and asked if she could be in the writers’ room for the show – in Los Angeles – by Monday morning.

Throughout the writing process, her life and Emily’s started to intertwine. “I said here’s my life, take everything, and just shared all my anecdotes. Darren Star created this character, but there’s a lot of me in it.”

“I’m a cliché. I live in the Marais. I’m an American in Paris. I do yoga. I am a vegetarian. There are a lot of things about me that are super cliché American."

So, what about the criticisms that Emily’s Paris experience is not realistic? Ms Leffler concedes that Emily, played by English actress Lily Collins, daughter of rock star Phil, would probably not have a wardrobe of designer clothes, or an elegantly decorated 40m2 chambre de bonne waiting for her on arrival in Paris.

Her client wouldn’t send her lingerie – especially in the Me Too era – and she added: “My neighbours never looked like Lucas Bravo [the actor who plays Emily’s love interest Gabriel].”

The show has been criticised for portraying a lack of diversity in Paris, something Ms Leffler believes is accurate of the marketing and fashion industry, and a real problem.

The harshest critics of the show, in Ms Leffler’s experience, have not been French viewers. Her French friends have mostly enjoyed the series and the most disparaging comments have come from expats who have moved to Paris but not had the same charmed experience as Emily.

“It’s because we’ve all really had to work [to live in Paris]. I’ve had to suffer through a lot of merde. And she just comes, she posts a picture of a croissant, she’s really succeeding, and she has all these guys throwing themselves at her.”

Emily in Paris was always supposed to be a fun piece of light- hearted escapism.

“No one wants to watch a show about someone trying to find an apartment, or waiting in line at immigration and crying.” After working as a journalist and film critic, Ms Leffler began to write books.

As well as working in a marketing agency, she writes vegan cookbooks and has also written a French- language novel, La Fleur Bleue, about her experience of moving to Paris.

Central to the story were themes that are also explored in Emily in Paris: friendship, fitting in and independence.

When researching her novel, she found there were plenty of memoirs about American women who moved to Paris because they “married a French guy”. “They’re a fish out of water and they learn to navigate the situation. For me, I came on my own and learned how to be independent.

“I just fell in love with the city. That’s a whole different story.”

She is proud that in the first series we see Emily doing it all herself, with a resolute smile on her face. The character she inspired has, in turn, inspired her to remember who she was when she arrived in Paris and tap into Emily’s positive, can-do attitude.

Ms Leffler, now in her late 30s, has lived in the French capital for 16 years, with a few stints in New York in between. Her time in France has confirmed some of the more American aspects of her personality and changed others – notably her sense of style.

She went from wearing “sorority butt pants, sweatshirts and winter jackets” in the US to “fancy dresses on red carpets”.

Culturally, she is now in the no-man’s land so many expats find themselves in – feeling too French when she returns to the US but “like I have an American flag stamped on my forehead” when she is in Paris.

She admits: “I’m a cliché. I live in the Marais. I’m an American in Paris. I do yoga. I am a vegetarian. There are a lot of things about me that are super cliché American. I still take pictures of a beautiful sunrise or sunset. When the Eiffel Tower sparkles, it sends shivers down my spine and I love to sit at the Café de Flore.”

She has noticed changes in Paris too, especially the impact of globalisation. She believes the dislike of Americans we sometimes glimpse in the show no longer exists to the same extent, as so many Americans visit and live in France, and vice versa.

Netflix has not yet confirmed a second series of Emily but, due to the show’s global popularity – and knack for stirring up discussion – it seems likely.

In future episodes, Ms Leffler would like to see her on-screen alter ego go through some changes of her own. “She has a lot of growing up to do,” she said. “It would be great to see her explore and learn more about herself.

“I would like her to have more French friends and succeed at work but let herself go a little bit. It would be great to see her not so aggressive.”

Most of all, she hopes Emily does not lose her joie de vivre, her independence, or her sense of who she is. For Ms Leffler, success came when – rather than feeling like a fish out of water – she started to embrace the things that made her different.

This is also a journey she would like to see Emily go on.

More interviews from The Connexion