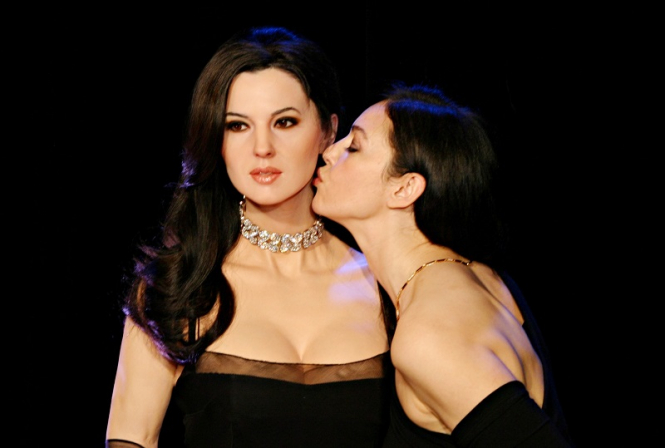 Véronique Berecz (below) has worked at the Musée Grévin (grevin-paris.com) in Paris since 1983 and is still captivated by the magical surroundings of the famous waxwork museum, which has more than 200 mannequins on show – including international celebrities, as well as figures from French history and fictional characters.

She knows everything about the museum, from the way the models are made with infinite patience to the reaction of the stars when they are selected to be immortalised in wax – because it is her job to ring them up and tell them.

Often the first reaction is one of surprise. If they came here to visit when they were a child, they find it amazing, because they never imagined that one day they would be in the museum. They are flattered and it is an honour for them. They are also curious to find out how a model is made.

Does it mean they have to come several times to the Musée Grévin?

There are three important appointments.

The first takes 2h30 and we take all the necessary measurements, verify the colour of their eyes, their hair and their skin.

The sculptor will model the face in clay and a second appointment will be made to check for accuracy.

For example, this afternoon, the countertenor Philippe Jaroussky is coming and he will stand next to the model so we can make sure everything is absolutely perfect.

There is a last meeting before the unveiling to make sure the colour of the skin is not too pale or dark, and that the hairstyle is just right. Then the model is revealed at a presentation evening when the celebrity meets with the finished model with his family and the media.

How do they react when they come face to face with their wax twin?

It is an emotional moment because they find themselves face to face with themselves and it is different from seeing yourself in a photo. You can walk all around “yourself”.

How many people does it take to make a model?

It takes about 15 people and six months to complete a celebrity. When the sculpted head is finished a mould is taken, and then beeswax is poured into the mould, with a little hardening agent, and some colouring for the skin tone. It is left to dry and then the details can be added.

Natural hair is used and put in, almost strand by strand, which is a meticulous job.

For someone like Céline Dion, for example, who has a great deal of hair, we might also use a wig for part of it, which is also made here.

Then the face is made-up with oil paints, and this is artistic work, because every detail is included, so, for example for Pope Francis you can see all the little age spots on his skin.

The model is then dressed, often in clothes the celebrity has donated to the museum.

How much of the model is in wax?

Just the head. It is a fragile material, and the public can get right up close, so it could not all be made in wax.

Why use wax if it is so fragile?

Because it is one of the rare materials which has a transparency which resembles human skin and it can be coloured with oil paints.

How do you choose new personalities?

The management chooses the international personalities, but French celebrities are chosen by a special panel, the Grévin Academy, which was introduced in 2001, and has the well-known journalist Stéphane Bern as its president.

The members all come from the media and they meet twice a year. We prepare a list of nominations and they choose two or three celebrities at each meeting.

Does this mean that when there are 10 new models, an existing 10 go?

Not necessarily. It depends on whether the person is still well known, or whether we have a big change of décor as we did at the beginning of this year, when we completely changed the historic part and the singers and sporting sections.

We also rebuilt the entrance so that it is very grand and the visitor can imagine he or she is a star arriving at a palace.

And if anyone is involved in a scandal would you remove them?

We are not here to judge anyone, but it is true, that at present we are wondering what to do about Michael Jackson with the new revelations about his character. It is a complex decision.

What is the history of the museum?

The Musée Grévin opened its doors for the first time on June 5, 1882.

The idea came from a journalist, Arthur Meyer, who thought readers of his newspaper might like to know what the people he was writing about looked like.

Television did not exist, photos were seldom used in the press, and so he had the idea of creating a 3D newspaper.

In 1882, you could meet Victor Hugo, Auguste Rodin, Sarah Bernhardt, and the President at the time, Jules Grévy.

It was called the Musée Grévin after Alfred Grévin, a cartoonist, designer of theatre costumes and sculptor who was called in to help and immersed himself totally in the project.

Does it have any links with Madame Tussauds?

No, the story behind Madame Tussauds is different. Both were created by French people who saw the interest in using wax to create models of people the public might like to see.

She originally made models in Paris and as part of her work she made death masks for those killed in the Revolution. Before then, she had also made models of the royal family and even gave lessons in using wax in this way to Louis XVI’s sister.

She was forced to leave France for the UK for her safety sometime after the Revolution and eventually settled in London and created her museum.

Waxwork museums might have been invented by the French, but wax masks and models date from Egyptian times.

The museum was started because there were very few photos and images available. Now photos of stars are everywhere, so why do you think it is still popular?

It is incredible how people love to come here. I think it is because there is a second when a visitor really feels he is next to the actual person. You cannot get that sensation anywhere else. It is not the same as seeing a photo or film of someone.

To be in Monsieur Macron’s office is not possible anywhere else. And everyone has fun having their photo taken next to a star. You can continue the joke by sending the photo to your friends and saying, “Look who I met today!” It’s a game.

People even play at standing completely still and seeing if visitors will be fooled into thinking they, too, are a statue.

You have been here for 36 years. Is the Musée Grévin still a magical place for you?

Oh yes! First there is the wonderful décor as it is based in an Italian-style theatre with a grand marble staircase and mirrors and it is just an amazing place to work in.

Then, when I go from office to office and pass in front of the visitors it is such a great lift to see them all having fun, enjoying themselves and smiling.