‘Read, have a good team around you, be curious’ 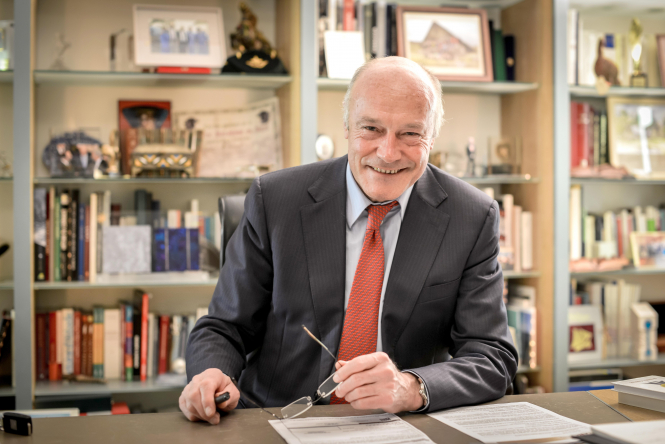 'We do not have any role in health, other than research and training. Everywhere else in Europe, healthcare is looked after by the regions' Pic: Alban Gilbert

In his long political career – Alain Rousset is now 70 – he has been a mayor, the vice-President of a department, and an MP, but has spent the longest period, 23 years at the head of the Region, which is the biggest in France.

Why should Regions to have increased powers?

I am very critical about our present model because responsibility is an essential element for efficient local government. It is essential that public authorities can react to what will happen in the future in terms of economic development.

Look at our dependence on China for our medicine and electronics. What will happen if there is an increase in geopolitical problems between China, Taiwan and the USA? We need the Regions to introduce new technological skills and industries, and this is what we do in Nouvelle Aquitaine.

How can you do this better than national government? Because you know your region better?

Paris does not understand the economic network of local small and medium sized businesses. We support and work with 2,600 of them a year and this proximity to local industry and the Region’s desire to be very strong in development and work towards the world of tomorrow means we can be very efficient. By the end of 2019, we had created 36% of new industries net in France.

Is your interaction with businesses a central part of your work in the Region?

Yes, it is very important, and perhaps together with professional training the most important role. Today we need to close the gap between companies who can’t hire the employees they need and the number of people without work, and train people for the qualifications and specialities employers are looking for. One of the forces of the Region, is to bring together the world of research, business and training.

As well, and it is perhaps a distinctive mark of the Nouvelle Aquitaine Region, I want to be involved in the preparation of the world of tomorrow, I wish there to be a bridge into the future for companies, by working on economic intelligence, and the needs of society, such as moving towards zero carbon emissions. I think of electric cars. In the Region we have created a technological and industrial consortium around the battery of the future.

You tell me you work in many different areas on a very broad spectrum. Do the French public understand what you are doing?

Is that why very few, under 33%, voted in the regional elections this year?

We must take into account the fact that abstention is a phenomenon that is hitting all the elections, and which is a trending phenomenon in all democracies, not just in France. But it is obvious that the muddled information the French electorate receives worries voters.

This is an example of why we need more clearly defined and more power in the regions.

If someone in Blaye in north Gironde works in Bordeaux, the journey [50km] can take up to three hours if you are not on the road by 6.30am. The solution would be to allow buses to use the emergency lane, but the State has to give its permission and they have not done so yet. In one day, the Region could provide a bus for the inhabitants of Blaye.

Often there need to be six around the table to make a decision on a wide range of very varied projects, say to renovate a town centre which has lost its commercial vitality. The centralised government model means everything takes much longer, and adds to the cost.

What we can and cannot do is unclear and it means our fellow citizens don’t understand the difference between how the mayor, the department, the region, the grouped communes, the State, the prefecture, effect their daily life.

Are there too many layers of administration?

France missed a great opportunity in the 1960s to fuse the communes. But the real problem I have observed over many years, is the relation between the State and the Regions.

It is difficult, above all with this government, to negotiate on the areas which are shared between the Region and the State. In education, the Regions should have greater authority than just the buildings for lycées professionnels and lycée agricoles [as the Regions are responsible for professional training] perhaps not for the syllabus, which should be left to the national education department, but for management of teachers, and introducing innovative education programmes and general management. In health it is the same thing. Before this big region, the Nouvelle Aquitaine was created, the three University hospitals – Limoges, Poitiers and Bordeaux – did not talk to each other. So we created networks with a fairly massive intervention in terms of higher education and research.

I am frustrated, yes. I try to compensate this frustration by introducing innovative actions in the domain of research.

The Region has created a centre of Research into vine and wine. It was my first project when I became President.

The Region has ways of being innovative, but in terms of finance, we would not have been able to do all that we have done, without grants from Europe.

I believe, profoundly that a centralised model of government is one which humiliates those working in the regions. It gives the impression that we cannot speak well unless we come from Paris, that intelligence and innovation can only come from the capital Paris, when that is totally false. It absolutely comes from throughout the territory.

Is this why you started a political career, to make a difference?

Yes, because I like to be active, to do things, and not work solely in terms of ideas.

Of course, we spend time thinking and reflecting on the best way to do things. Should we create a training centre for scientists, a centre of research for lasers and optics, or should we scatter our money over the Region spending it on roundabouts or salles des fêtes? We have chosen innovation and research over roundabouts and village halls.

You were an MP, but you chose to stay in the Regions. Was that to be closer to the local population?

A President of a Region, unlike a Minister in national government, has a capacity to innovate immediately. I can start, encourage and activate ideas, not just in the Regional Council, but also in the field, with the people concerned.

We work directly with the farmers who are involved in the changes to agriculture. We have signed an agreement, called Néo terra, with the co-operation of 73% of farmers in Nouvelle Aquitaine.

Because I believe that government needs to be renewed and re-energised.

During les Trente Glorieuses [30 years from 1945-1975] we knew how to put policies in place which were adapted for the future. We have LGV trains, we can go into space, we have nuclear power stations, whether you agree with them or not, because of government decisions. But for the past thirty or forty years the government has not been in the driving seat to take initiatives which are essential for the development of a country, on employment, medicine, the battery of the future, hydrogen as a fuel, etc., these are issues where the public powers must take part and anticipate the future, because government and politicians are supposed to represent society.

Agriculture, for example, has to become more ecological, and it is changing, but the public authorities should be there to support farmers and to make it all happen faster.

You are responsible for a very broad range of sectors. Technology, agriculture, roads, rail, culture, education, etc. How do you manage to be informed in all those areas?

I will quote Montaigne, a phenomenal man from Aquitaine, who said you should have a head which is well made and well informed.

It would be pretentious to say I have a well-made head, and of course the work of a Region is the work of a team, but I try to make it well informed. Take forests and woods as an example. They are not there just for making paper, not just a landscape, not just fuel for fires, or an ecological building material – they are also, I hope, the medicines of tomorrow. Did you know pine resin can be used not only as a base for cosmetics, for glue, house cleaning products and so on, but in the future we should also be able to use it as a principal ingredient in certain medicines? We have a research group that has been working on this for a year and a half.

You have to look at things in a broad way, you have to read, be curious, have a good team around you, and when you are involved in a project you have to lead it right through to its conclusion, which is difficult when there are elections.

However, you have had plenty of time in the Region as this will be your fifth term of office. What are your priorities for the next five years?

The transition to a more ecological way of living whilst taking into account the problems of employment and creating new jobs for families in the Nouvelle Aquitaine region. It is why I stood once again for election. I have the same passion I have always had and I have thousands of different projects.

You have said in the past that the British are welcome in the Nouvelle Aquitaine. What do we contribute to the region?

Your presence and, the fact that some villages in the Périgord, the Creuse and the Corrèze, could not live without British people. Then there is a shared history. Eleanor married an English prince. Later there was Edward the Black Prince, who I believe was one of the most benevolent rulers of Aquitaine. Even if I am not originally from the Nouvelle-Aquitaine [born at Chazellessur- Lyon, Loire], it is this history which gives me this feeling of responsibility and autonomy.

Some Regional Presidents, such as Xavier Bertrand, Hauts-de-France or Valérie Pécresse, President of île-de- France, would like to stand for President in the next elections. Does that tempt you?

It might have crossed my mind at some time, but I do not have the eternal youth of Joe Biden. And my grandchildren would forbid it.

One tower per family in this noble medieval site in France
3 December 2021
More from Interviews
More from Connexion
Get news, views and information from France
Join the newsletter
Subscribe to The Connexion