‘The French are terrified of grey hair and wrinkles’ 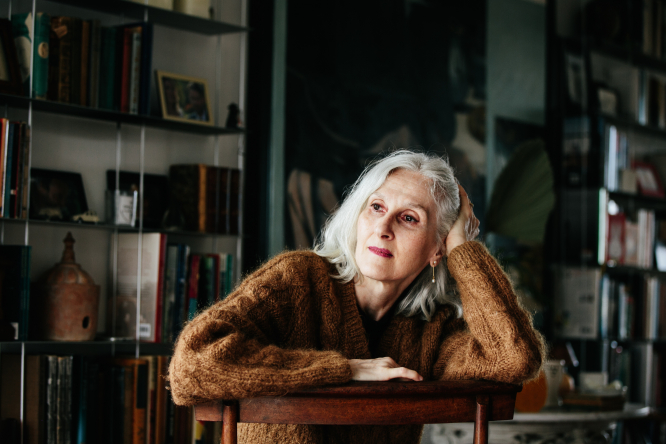 'I think the more visible we are, the more we will accept age, and the more we see older people in active roles, the less we will be regarded as old' Pic: Lorna Milburn

During her seven years in London, Sylviane Degunst worked continuously, her image appearing on billboards all over the UK, in newspapers and magazines.

Now back in Paris, she has been offered little work as a model, and says it is time France began to embrace the image of growing older.

She is now 63 and has written a book, Moi, Vieille et Jolie.

How did you get started?

I had been in London for a year because my husband René had been offered a job as a financial strategist.

One day when we were out walking, two young men stopped us and asked me if I would like to be a model.

They came from an agency and had noticed my very white hair, which I have had from an early age.

I thought: “Why not?” I had worked in publishing, including selecting photos for women’s magazines. Now I would be on the other side of the camera.

I immediately got lots of work.

I regularly appeared in the Guardian Weekend, where they have had a spread called Fashion For All Ages since 2009, and where both young and older models are on the same page, all wearing great clothes.

I worked for a Debenhams campaign – my image was in the Oxford Circus shop window and all over the UK, in the Underground and on the buses. I went to South Africa for a publicity film, shown in cinemas all over the world.

Since I returend to France, I have signed up with an agency, but I have had almost zero work, other than some from British clients.

Why do you think that is?

If they are, they talk about mature skins, as if you were a piece of cheese, or you are referred to as a “senior” – a word I detest.

In France, Eric Bompard cashmere jumpers will use an older woman about my age from time to time, in winter, but it is very rare.

Isabella Rossellini might model for a make-up advertising campaign, but that is because she is a well-known actress and former model. Ordinary women are not portrayed.

I have a horror of anti-age cosmetics. Why worry women with all that? I have always just used my pot of Nivea cream. There are clichés about older women that persist, and a 45-year-old woman who loses her job will find it very difficult to find a new one.

What difference does it make to have older women portrayed in fashion?

I think the more visible we are, the more we will accept age, and the more we see older people in active roles, the less we will be regarded as old.

Getting old is not an illness, but the real subject of old age is the approach of death.

I think we hide death away. We do not face up to it. There was a study which showed that the age at which you are considered old, and the image that gives you, depends on which country you live in.

In many of the poorer countries, old age is regarded as something rich and positive. In contrast, we try to cover age up with our anti-wrinkle creams and our fear of the menopause.

As well as dealing with the serious subject of ageing, your book talks in a light-hearted and humorous way about your time in the UK. Did you enjoy life as a model?

I adored it. My first job was in Selfridges, Oxford Street. It was an event where we surprised shoppers with a fashion show, suddenly appearing and parading around the beauty department. I was dressed in Fiftiesstyle Paris clothes, wearing Dior with long elegant gloves and carrying a poodle. I was electrified, and felt I had been modelling all my life.

Sometimes, a taxi would come and fetch me at 5am to go into the country for a photoshoot, and the models were treated like queens.

They brought us lovely food, we had our make-up and our hair done for us, wore wonderful clothes, and I made very good friends with the people on the regular photoshoots who were of all ages and nationalities.

I was being paid for doing something which was great fun.

What did you like and dislike about the UK?

I found people very warm and welcoming. When I arrived in 2011, I immediately felt at home.

At first the “hello darlings” and “hello sweeties” from people I didn’t know in pubs and supermarkets was daunting but after about a month I came to love the warmth it conveyed.

In the cinema or the pub, people sitting next to us would start up a conversation. You would never talk to strangers in a cafe in Paris. We travelled all over the UK on a motorbike and the countryside was wonderful.

I only disliked two elements: Brexit and binge-drinking. I remember seeing a group of girls outside a pub, in high heels, mini-skirts and lots of make-up. When we passed again, two hours later, the same girls were throwing up and even urinating on the pavement. I do not want to pass judgment – I just don’t understand.

Was learning the language difficult?

When I was with my friends, they articulated and made an effort to speak slowly, so quickly I felt I could have a conversation in English.

On a photoshoot, when seven or eight were speaking together, it was difficult to follow, but with two or three, or with just one person, it was fine. They say it takes eight years in a country to really learn the language. I was there for seven. What a shame…

Why did you leave?

I left to be with my mother, after my father died. My husband René came a year later. He was made redundant because of Brexit when they massively cut numbers in the financial sector.

Do you think there is a difference between the image of older people in France and the UK?

I was visible in the UK, but I am invisible in France.

I worked with a French gay man, my age, who came to London years ago, because he knew his homosexuality would not be judged in the UK.

It does not matter if you are fat or thin, short or tall, gay or heterosexual, Jewish or Arab, young or old. At the language school I went to, there was an Eritrean who was veiled and one who was not and it wasn’t a problem. I found people were not judged on their appearance or their age.

That was my experience, anyway. My time in the UK was magical.