How to eat well, save money AND the world 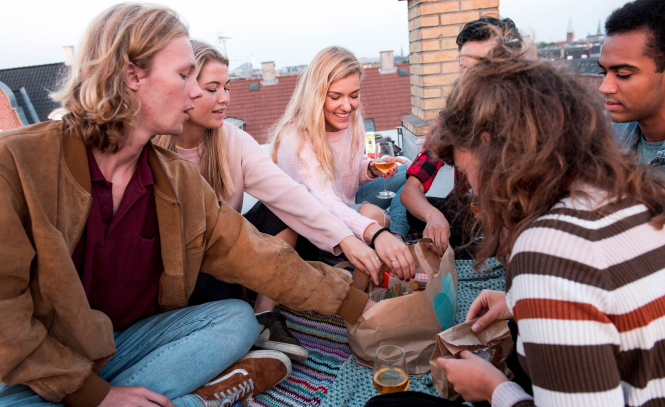 Lucie Basch is one of the stars of the fight against the climate crisis. In 2016, aged 25, she created the Too Good To Go app and website toogoodtogo.fr which lets consumers know when shops or restaurants have leftover food at the end of the day that they are willing to sell off at a third of the retail price to avoid throwing it away. It has earned her prizes as one of the top 50 women in business, awarded by LSA consumer and commerce magazine, and the 2019 Europe 1 Trophy for Businesses of the Future in the food sector.

After studying food science at university, you landed a job at a UK-based food group, but didn’t stay long. Why was that?

I was responsible for improving the production process so as to increase output. I had always been aware of the problems of food waste and what I saw
in the industry made no sense at all! I handed in my notice after 18 months.

Why is food waste such an important issue for you?

It has always been something I have found to be an aberration! A third of the world’s production ends up in the bin; in France, 10million tonnes of food are thrown away every year!

Apart from the social injustice when 870million people do not have enough to eat in the world today, food waste has a huge ecological impact and is responsible for 8% of greenhouse gases. If food waste was a country it would be the third biggest polluter, after China and the USA, and that is not acceptable.

You were 22 when you left the UK company. Did you have an idea of what you would do next?

I had always wanted to fight against food waste and so I spent the next few months working on my project, finding the right people and with them creating Too Good To Go. Today we are present in 13 countries, we have 13 people million signed up, 29,000 shops and restaurants who work with us and we have saved 20million meals. Incredible!

If food waste was a country
it would be the third
biggest polluter, after
China and the USA

After the UK you went to Norway. Why was that and did it help inspire you to create the App?

My boyfriend was there. I have always loved Scandinavia, above all because of their links with nature and its huge open spaces. Norway is way ahead on the food waste question, and notably on their use of sell by dates, which are responsible for 10% of food waste in Europe.

Their labels are very clear with an “Eat before date” and a “Best before date”, like the UK. These are clearer and easier to understand than those in France and leads to consumers throwing less away.

How did you come up with the Too Good To Go idea?

One evening, I walked in front of a bakers which was closing, and saw the shop assistant about to bin a whole pile of products that had not been sold. I explained that it broke my heart to see all that good food going to waste and offered to buy it all at a low price and I came away with the products, which were still good to eat. That is how the concept was born.

Was it complicated to turn the idea into reality?

The most difficult part was persuading the first shopkeepers to join us. At that time the application was not perfectly developed, we had no financial backing and no proof that it would work.

We only got it off the ground by being persistent so that eventually our first partners agreed to taking part in our experiment. They were quickly convinced that it worked as it is simple, flexible and a win-win solution for everyone. Word quickly spread which meant we were able to develop as rapidly as we did!

Why did you choose to save the planet via an app?

Today the situation is so urgent that everyone has to think of solutions so that as many people as possible can get involved and change their daily habits.

Too Good To Go is a really simple way for people to get involved on a small scale: you can save unsold food from the bin in a couple of clicks, whether you are a seller or a buyer.

Why do you think your application has had the most success in France?

France was the first country to legislate on food waste with the Garot Law in February 2016, which made it obligatory for supermarkets to give their unsold food to associations and made it illegal to destroy food which was still edible.

In France, we like our food more than any other country does, and value local products, so I think the cultural factor is also responsible as people do not want to see the hard work of the producer and the good food go to waste.

Your ambition is to reduce food waste by half by 2025. How?

As well as the app, our mission is to educate as many people as possible, and above all in relation to expiry dates. We also work with businesses and public authorities to help educate new generations. We all have the power to change things.

You say that sell by dates are responsible for 10% of food waste in Europe. What needs to change?

We have four priorities for France which we have written up in a livre blanc: to harmonise the application of expiry dates, to educate the public about what expiry dates mean, to redraw the contractual rules between manufacturer and distributor, and to revise the use of the minimum durability dates.

We want people to understand the difference between “use by”, which is usually used on perishable goods and means there may be some danger to health if they are eaten after the date and “best before”, which indicates how long a product can keep its optimum quality, but is likely to be perfectly edible afterwards for a certain period of time.

People should use their senses to assess if a “best before” product is still good to eat by its appearance, its smell and maybe tasting a sample – 720 million eggs are wasted in the UK alone.

There is a simple test. If you put an egg into a bowl of water, a good egg will sink and lie on the bottom. An egg that needs to be eaten soon will sit upright on the bottom and a bad egg will float. A simple way to save food.

Is it up to us, the public, to change the way we live and what can we do?

As consumers, the general public has huge power! Our choices have a massive impact, even the small choices are important and we do not have to change everything at home all in one go.

Starting by eating less meat, buying loose non-packaged foods where possible, cooking and eating leftovers rather than throwing them away… there are so many easy steps anyone can do.

You are young. Do you think your generation is going in the right direction to save the planet?

We don’t have much choice! But when I see people from all over the world march on the streets to defend the planet and when I hear about all the new projects and businesses being created with a social and united aim to be more ecological, it gives me hope.