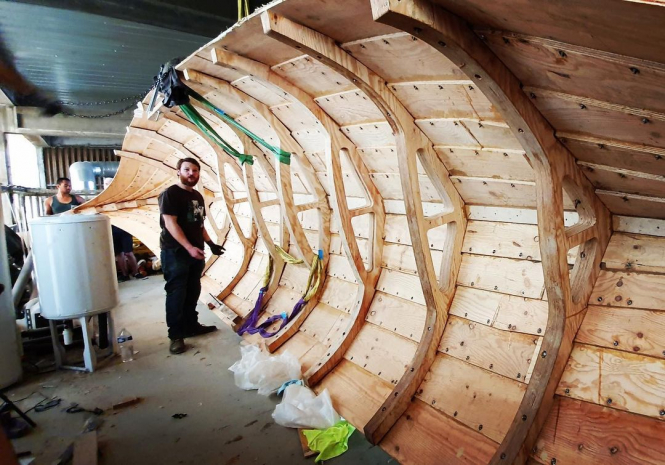 Around 45 people will make the voyage, which is due to commence in spring 2024 Pic: Studio Gâchette

The Bátar collective has built several boats and completed successful voyages across Europe over the past decade. Now, they plan to cross the Atlantic and share the adventure with as many people as possible.

“When we think about the Viking spirit, the dream is to cross the Atlantic. It is a harsh crossing so it is definitely not going to be easy.”

The drakkar, named Orkan (Danish for hurricane), will be 28 metres long and six metres wide, and built by blending tradition with modern materials and technology.

It will be made of pine plywood, instead of oak, and the timber will be cut with compurised machines rather than axes.

Mr Devineaux says it is this combination which, combined with the vast size of the ship, will ensure it is the fastest drakkar in the world.

The 45-day voyage comes with considerable risks. However, Bátar has various safety measures in place, including hiring another boat to accompany them for the longest and most dangerous stretch of the journey, from Scotland to New York, in case a rescue is needed.

Around 45 people will make the voyage, which is due to commence in spring 2024. This crew will comprise a mix of experienced sailors and volunteers trained for the role.

Applications do not open until next year, but more than 150 people have already expressed interest.

Mr Devineaux said: “This project is open to everyone. It is not a boys’ club. We need people not only with skills but with enthusiasm.

“We want to show the world that it is possible, with a community, to set up a big project like this.”

Vikings still make their presence felt in France in other, less obvious, ways. Normandy, for example, was named after the ‘men of the north’, who raided and eventually settled in the area more than 1,000 years ago.

Truffle season starts in France with quantity down but quality up
1 December 2021
More from Interviews
More from Connexion
Get news, views and information from France
Join the newsletter
Subscribe to The Connexion